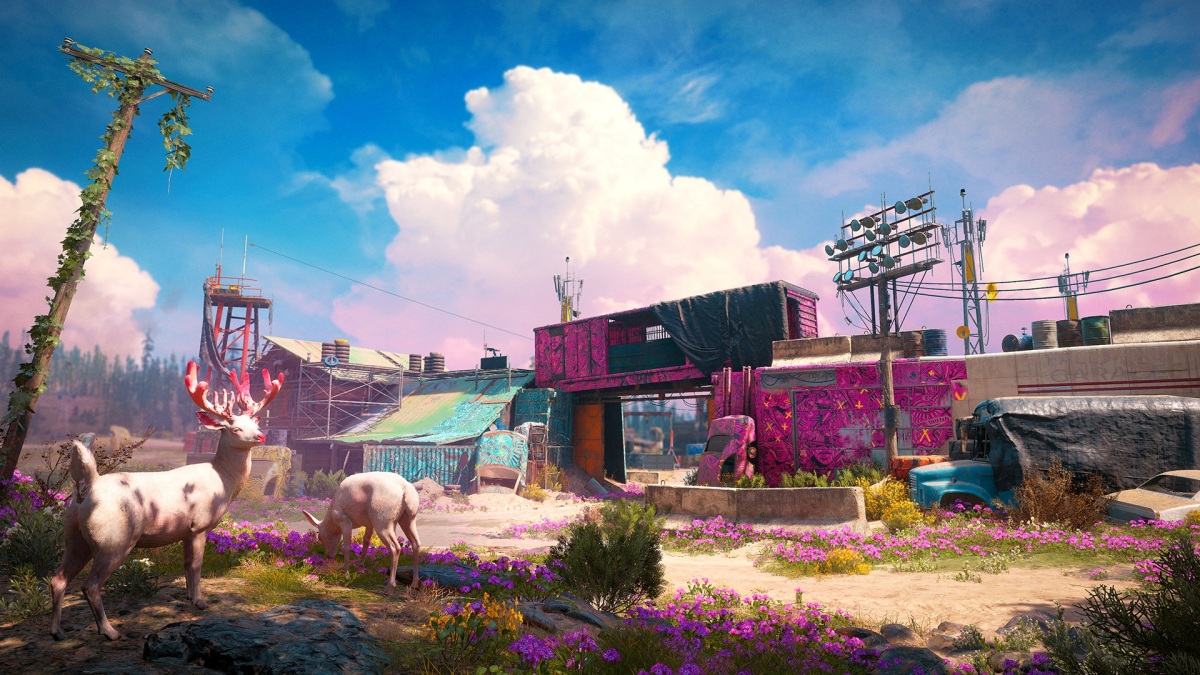 Announced in December, not too long before its February release, Far Cry New Dawn continues the Far Cry series by returning to the setting of the fifth main game in the series while adding a post-apocalyptic theme to it. We playtested it on an Xbox One, but it’s also out on PC and PS4.

Even though the Far Cry series is only up to number five, there have been a ton of releases in the series that weren’t numbered. Far Cry Instincts was an early console take on the franchise, but the titles that really stood out for me were Primal and Blood Dragon – both taking the core concept and bringing it to a completely new environment. I liked Blood Dragon especially, not only for its sci-fi setting but also because it was a more condensed experience – “proper” Far Cry games usually tend to drag on for a bit too long in my book.

Which is why I was surprised when New Dawn was released, because I thought Ubisoft had taken the “new setting” formula and just applied it to post-launch DLC content, as Far Cry 5 received a trio of excellent new mini campaigns. New Dawn isn’t like those DLC episodes as it’s significantly longer, but it’s also quite a bit shorter than Far Cry 5 was – with a milder price tag to match.

Instead of the radical new setting that Blood Dragon had compared to Far Cry 3, New Dawn more or less follows in the footsteps of Far Cry 5 from a narrative perspective. It’s been 17 years since a nuclear event, and Hope County has fallen victim to the usual post-apocalyptic anarchy – with a gang called the Highwaymen terrorizing the remaining residents. It’s up to you to stop them, and you’ll be joining forces with the New Eden group in doing so.

It’s not the Highwaymen that have laid the biggest claim to Hope County though – it’s nature, as (in a break from the usual visual depiction of a post-apocalyptic setting) the world around you is brimming with lush greens and other plant- and wildlife, having prospered after human civilization was thrown back in time. It makes for an interesting audiovisual spin on an existing setting, and a fresh new take on the post-nuclear approach.

What’s interesting from a narrative standpoint is that most of the characters you encounter represented a more fragmented society this time around – as opposed to Far Cry 5’s cult-oriented plot where characters felt like-minded in their behavior, like a flock of sheep. And while the environment looks slightly different, the locations you visit are often familiar – so it’s nice to have new antagonists in the Highwaymen.

Far Cry New Dawn is still very much a Far Cry title with plenty of emphasis on capturing outposts and a need to upgrade your weapons quickly and often – forcing you to take on side quests and tasks that are removed from the main storyline. It’s a formula that wears on you in a “full” Far Cry title with a 25+ hour campaign, but New Dawn’s length is excellent in that the narrative doesn’t drag on for too long – my playthrough was about 14 hours.

You can extend this by tackling outposts again after capturing them, thanks to the Escalation mode which provides you with an even bigger challenge whenever you re-attempt a particular outpost. This is especially interesting during cooperative play, where cooperation is often the key to tackling these scenarios in a satisfying manner – where tougher missions also mean higher rewards.

If you wanted more Far Cry after Far Cry 5, you probably already played through the highly original DLC campaigns for the game. If you’re interested in going back to Hope County, then New Dawn is a clever and fun take on the fifth game that’s more fleshed out than those DLC campaigns. New Dawn doesn’t revolutionize the core Far Cry experience in any big way (even though the inclusion of coop is great), fans of Far Cry 5’s narrative will definitely not be disappointed with “what happens next”.