A new indie platformer from Ratalaika, Peasant Knight is coming to the Nintendo Switch, Playstation 4 and Playstation Vita. The latter two are a cross-buy purchase, and we tested the Vita version for this review.

In Peasant Knight, there’s a plot of sorts. There’s an evil wizard, and a common knight who dares stand up against him and sets out to save the land. It’s presented in a short series of slides before the game starts, and completely vanishes from view right after that. Peasant Knight is firmly about the gameplay, with a simple hook and easy to understand (yet hard to master) controls that make you think this would probably work fine as a mobile title as well. 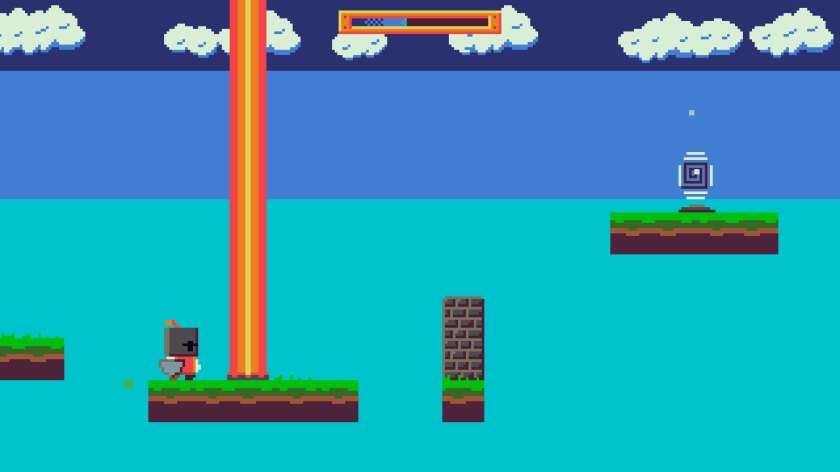 As with the recent Necrosphere Deluxe release for the Vita, Peasant Knight changes up the platformer genre by experimenting a bit with its control scheme. The game is most akin to Jack ‘n Jill DX though, if you’re comparing it to other Vita games. In this game by developer 4AM your little knight charges forward automatically after you start a level, and it’s up to you to make sure he doesn’t meet certain doom (too often and too quickly). To do this, you only have two control options available to you: jumping and stopping.

Initial levels are simple enough, ranging from your knight charging straight into the exit portal to carefully timed jumps over pits, walls, saws and other obstacles. Later on, other portals are introduced that transport you to different places inside the level, and you have things like elevators and laser beams that will trigger as well (for which you often need to stop for a second). This is where just relying on quick reflexes will no longer be enough, as Peasant Knight has puzzle platformer elements as well.

As if figuring out how to get to the end wasn’t hard enough, there is also a time element, as your knight gets hit by lightning if you tread too carefully – causing an immediate restart. There are 80 levels, the second half of which can get quite challenging to the point of bringing frustration to the more casual platforming fans out there. Luckily, you don’t need to get that far to unlock all of the game’s trophies – the last one (assuming you fall victim to a few traps here and there) unlocks in level 47.

The Vita version lacks the local multiplayer support that the console versions have, for obvious reasons. As such, there is a limited amount of lasting appeal here – there’s very little reason to go back after you beat all the levels. Luckily, there’s a matching budget price tag – though plenty of players will likely see Peasant Knight as a good opportunity to add another platinum trophy to their list. As a puzzle platformer, there are better options out there, but Peasant Knight is a nice short diversion.