Beat Blaster, by Ivanovich Games, has been out for a while but is a title we didn’t get to review until now. It’s available for PC-based platforms through Steam as well, but we tested the Playstation VR version of the game.

Ivanovich Games was previously responsible for Operation Warcade, a really fun Operation Wolf-inspired shooter with support for the Aim controller. Beat Blaster also supports the Aim, an underused controller that’s absolutely great for VR experiences. Is it as good of an experience as Warcade was though?

Beat Blaster certainly is different from Operation Warcade, but with a title like that I was expecting it to be. I was anticipating something like a Beat Saber clone, but the game instead sits somewhere in between a VR runner and an on-rails shooter – although ‘on-rails’ doesn’t fully do it justice either.

That’s not to say that music doesn’t play a part in Beat Blaster – it’s just not the core mechanic. Your job is to get to the end of each level by getting past its obstacles and shooting the targets – your time and the amount of targets you hit determining the score for each level. After getting through a level, beating existing scores will have you coming back, blasting by that one obstacle just a little faster or getting that moving target rather than evading it.

The game’s not called Beat Blaster for nothing though – even though music isn’t the core mechanic (in a rhythm game sense), it still plays a large part. Everything in a level seems to be pulsing to the beat, and with Tron-like visuals this creates an audiovisual spectacle without relying on too fancy graphics – the VR versions of Rez’s original levels came to mind. Levels are procedurally generated so they’ll be different on a restart – which happens almost instantly thanks to very short load times. 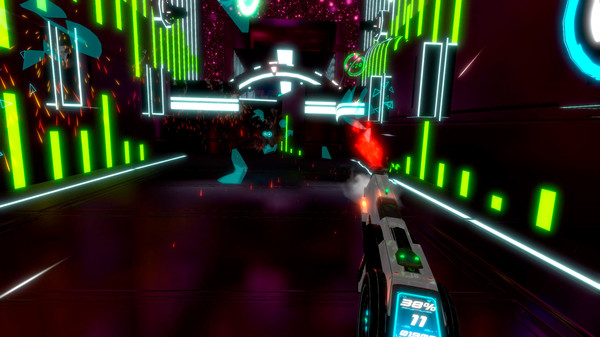 Something that Ivanovich Games has done very well is the implementation of different control schemes. I already mentioned that the Aim controller is an option, but you can also play with a pair of Move controllers or even the DualShock. They all work well, and they all have their perks and drawbacks. Move controllers are harder to navigate with, but do allow you to dual-wield guns – making it easier to hit those targets. Gamepad controls are better for navigating past obstacles, and the Aim controller sits somewhere in the middle – but doesn’t give you a dual-wield option. I believe the game also supports the 3dRudder, but we didn’t get a chance to test that.

Beat Blaster isn’t a radical departure from what came before, but it’s a solid VR title that combines a few good ideas even if it doesn’t add many of its own. The score chasing element will have people coming back, but the fact that levels are procedurally/randomly generated makes an honest comparison of scores difficult. If you enjoyed a game like Thumper in the early PSVR days, then this should certainly entertain you for a while.