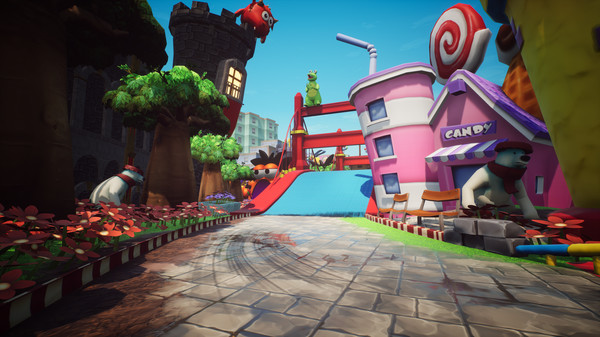 Race with Ryan is Outright Games’ take on a family-friendly kart racer for the PS4, Xbox One, Nintendo Switch and PC. It’s based on a popular Youtube channel geared towards young viewers, so how does that translate into a racer? We took the PS4 version for a spin.

If you have kids and you’re not familiar with Ryan, then a cynical part of me would want to congratulate you. A Youtube series that sees parents shower their kid (Ryan) with obscene amounts of toys and gifts, it’s at times a painful sight to see how little genuine excitement a kid can muster for the latest truckload of (sponsored) toys. They also include Ryan’s twin siblings in their shows, and as a parent you can’t help but raise questions at the thought of making money off of young children. Even if it’s the millions that their parents now earn in advertising.

Putting that aside for a minute, Ryan is still extremely popular with young Youtube viewers and even has his own line of toys now. For that crowd (and pretty much no one else), this new racer was developed – and there’s plenty of Ryan to be seen and heard in the game for his fans. 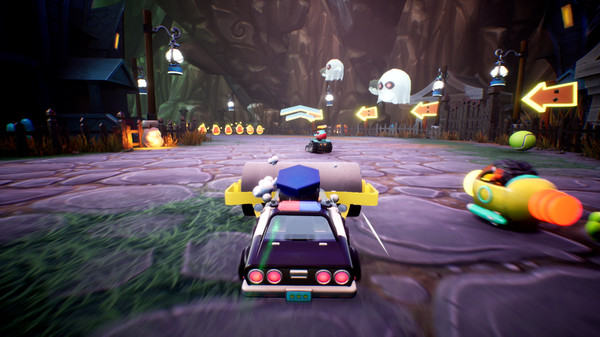 Not surprisingly, Race with Ryan follows the familiar pattern of Mario Kart and the Sonic kart racers for some cartoon-like racing, with many familiar game modes included. You can reach solo in individual races as well as cups, or you can take on others through the included local multiplayer mode – which supports up to four players at once and is one of the best features of the game.

You’ll have to try hard not to have multiple versions of Ryan racing each other during a race though, because the roster is filled with combinations of characters and vehicles where almost half of them are… Ryan. This wouldn’t have stood out so much if you had just been able to select a character and then a vehicle, but you can only choose them as part of a pair.

But while the character roster is a little deceptive in how (not) diverse it is, the track selection screen quickly makes it obvious there’s not enough to choose from. Flipping through the available tracks there are only six of them to select in addition to mirrored versions of them, with a few of them being locked at first.

While that’s a painfully low number considering the fact that Race With Ryan is being launched in the same price range at Team Sonic Racing, the tracks themselves are actually pretty decent. Each track has its own backdrop (like “Ryan’s Playroom” or a Halloween-themed environment), the cartoon visuals are fitting and all of the tracks feature alternate routes you can take. Mario Kart or Sonic this is not, but we’ve seen a lot worse in budget racers. 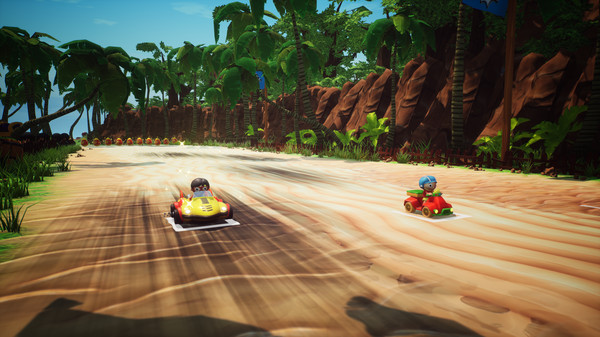 The actual racing is pretty decent as well, with easy controls to speed up and brake as well as the option to use pickups (which there are a lot of) and drift – which gives you a speed boost at the end of it. Most of the power-ups you collect while racing are toy-inspired versions of the usual kart racer fare, ranging from shields to protect you to things you leave behind on the track for those who pass by later. In other words, Race with Ryan ticks a lot of the right boxes when it comes to a kart racer.

It also, however, lays on the Ryan factor very heavily, which makes it hard to ignore for those who aren’t fans (and it’s a pretty divisive license, especially when compared to Outright’s recent Ice Age game). There are little (poorly recorded) voice bites that come up regularly as well as short videos of Ryan and his parents that feel like they serve little purpose except to shove in more of the license while feeling a little disjointed. And of course there are tons of characters that are all Ryan. While young children will definitely get their “there’s Ryan!” fill, it’s a little much for their parents just looking to join in for a little kart racing fun.

With so many better kart racers out there (Sonic, Crash and Mario cover all of the current systems), it’s hard to recommend Race with Ryan to anyone but those with a little one who’s a big fan of the license. Still, even in that situation I’d be tempted to try and change his/her mind, if only for my own sake. The racing’s halfway decent enough, but there’s a lot of Ryan to sit through before, during and after it.