When Kingdom Under Fire II releases later this week, it’ll be a new starting point for the series as well as the end of a long journey. We took a journey of our own as we traveled to Germany to meet with publisher Gameforge and developer Blueside as we dove into the game and its development. Here’s our report and why we’re eager to dive back in once the game is finally released for EU and US audiences.

Press event
The original Kingdom Under Fire released close to twenty years ago back in 2001. To put that into perspective, the spin-off title Kingdom Under Fire: The Crusaders was an exclusive for the original (!) Xbox console. To say that Kingdom Under Fire II has been a long time coming would be an understatement – yet the project is very much alive and pre-orders for the upcoming launch have been available for a few weeks now.

Besides plenty of time to marvel at Castle Reichenstein’s architecture and history through a series of fun activities on castle grounds, last week’s event in Germany offered members of the press a hands-on look at a recent English language build of the game. Prior to that, Gameforge also hosted a presentation on the upcoming launch, revealing new footage, screenshots and information on the game.

Game facts
Key reveals included an upcoming character class called the Dark Sorceress and the option to go on 16-player raids. You’ll be able to form guilds and go up against other guilds, and Kingdom Under Fire II will also feature seasonal events as part of its end game content. Gameforge and Blueside will gradually be adding content to the game post-release as part of an ongoing effort to keep players engaged even after completing the game’s story campaign.

Speaking of the launch and upcoming content – Gameforge is planning to release all this content for free to follow up on the game’s “buy-to-play” launch. There are three packages available to purchase already, ranging from the Hero package to the Emperor and War God packages. All versions include the main/full game, with the Emperor and War God editions also giving players additional cosmetic items as well as temporary booster packs. Many of these items can also be earned and purchased in-game, so it’s very possible to jump in at a lower tier and work your way up from there.

The presentation also discussed the game’s nature as a blend of (MMO)RPG and Real Time Strategy – a rather unique hook in the MMO genre. Playing out in the fantasy kingdom of Bersia the game relies on a lot of lore that was built up over the years (and a few spin-off titles), but cutscenes ensure you can jump in without too much knowledge of the ancient struggle between Nibel and Encablossa and the latter’s followers who are now spreading darkness across the land.

Launching with about 80 unit types, the number of available units to lead into war is expected to grow to an impressive 120 post-launch. This should enrich the RTS aspects of the game, which is very much at the core of the Kingdom Under Fire franchise (and how the original PC game started out).

Gameplay
The attending journalists were all given plenty of time to enjoy their first hands-on experience with Kingdom Under Fire II during the press event, and we spent about an hour and a half exploring Bersia and engaging with the game’s early stages. We captured most of our gameplay in a series of videos as well, the first of which can be seen here:

Starting from the very beginning, in the character creation suite, our time in Bersia featured much of the early stages in the game, slowly laying out tutorial elements as quests and battles presented themselves. Unfortunately this meant our time was mostly spent playing the MMORPG portion of the game and we didn’t get to engage in RTS gameplay, but it was nice to see the game slowly ease you into its mechanics.

Interview
We also had the chance to ask members of the Gameforge and Blueside teams more about the development and upcoming release of Kingdom Under Fire II, and we zoomed in on the new collaboration between Gameforge and Blueside. With the game having been previously released in Russia and China, we were curious what was going to be different this time.

Botond Nemeth, executive producer for Gameforge, explained that the previous launches were instrumental in the decision not to launch Kingdom Under Fire II as a Free to Play title. Player feedback from those earlier launches made them move towards a model that is buy-to-play, without any paywalls or pay-to-win constructions in place – though boosts do give you an option to spend less time grinding. 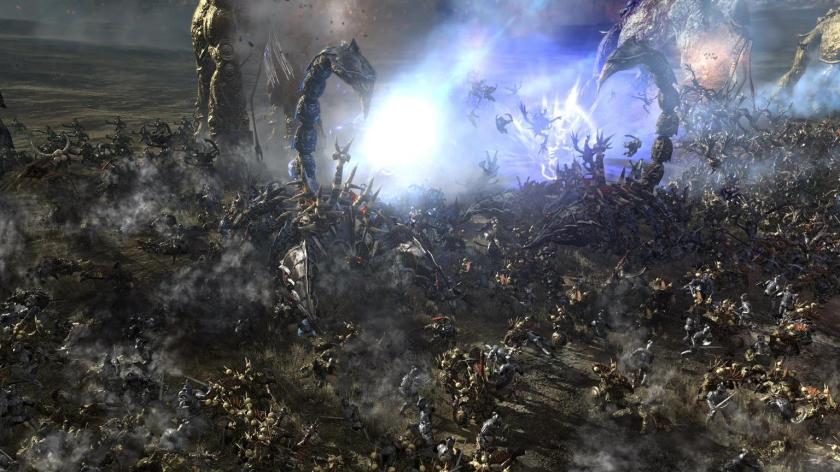 Besides the obvious work that has gone into localizing the game to English, German and French (you’ll notice in the videos that work was still ongoing in that area on the build we played), Gameforge’s expertise in online gaming also meant other changes were made to Kingdom Under Fire II. Gameforge runs their own data centers, and has a lot of experience on the infrastructure side of things – all of this was applied to the upcoming release of the game in the west.

Although the new Kingdom Under Fire game follows the events from the original/Xbox games, our gameplay session showed that there’s a lot of influence from the MMO genre that’s been inserted into the game – especially when you engage with the endgame content. Nemeth pointed out, however, that you can still play through the story campaign as though you’re playing a solo game – something that he estimated should keep gamers entertained for about two to three weeks.

We also spoke to Blueside’s business development manager David Wang and creative director Jubo Kim about games and franchises that have influenced the game (which was announced over 10 years ago) over the course of its development. This is where Blueside’s love for Real Time Strategy shone through, because although you can seamlessly switch between action RPG-like combat and tactical/strategic warfare, the title that really stood out for them was Relic’s excellent Dawn of War 2. Kim mentioned that “Looking at that game from a developer’s perspective really made us understand some of their design choices.”

With its unique blend of MMORPG and RTS, Kingdom Under Fire II is a title to look out for if you’re interested in hybrid experiences like this. After that first hands-on I’m curious about the RTS portion, especially if excellent games like Dawn of War helped influence its creation.

Kingdom Under Fire II launches on November 14th and can be pre-purchased now.