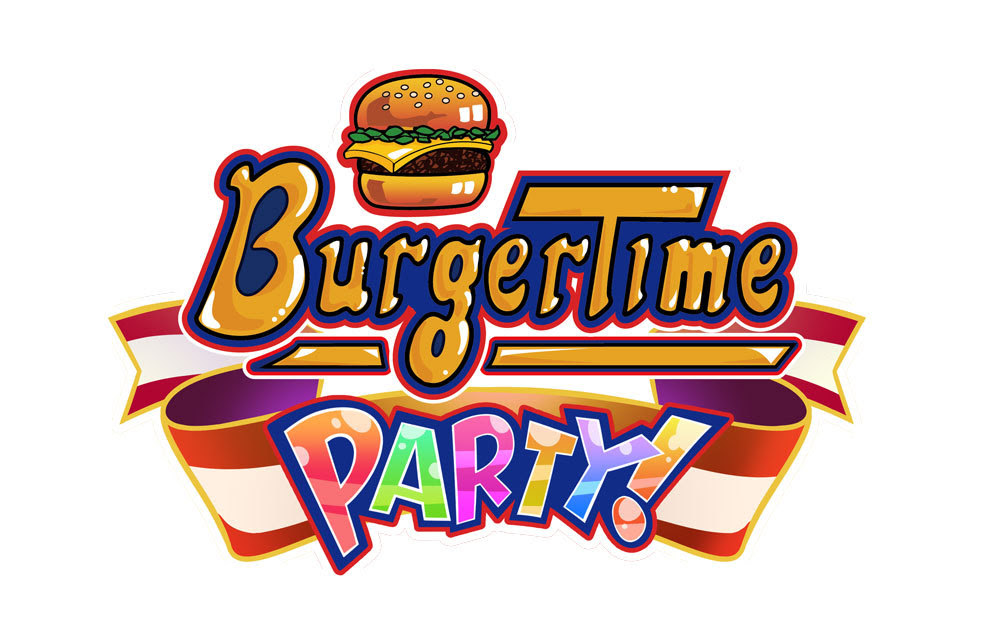 Over the holiday break, we finally had some time to sit down with BurgerTime Party! for the Nintendo Switch. Here’s why we think this is one of the better family-friendly titles for the Switch we’ve played so far.

Of course we previously went hands-on with BurgerTime Party during Gamescom already and the game released back in October, but it was a title we were keen to play when we started covering the Switch just a few weeks ago. After all, besides the first party releases the Switch is mainly a platform for ports and indie titles, many of which are also ports. BurgerTime Party! is a Switch exclusive, and one that fits the platform well due to its family-friendly nature.

The core gameplay in BurgerTime Party! is very close to the classic arcade game by Data East – arguably their most well-known arcade classic. Playing as Peter Pepper, you traverse single screen platforming levels to create the perfect burger (or hot dog) while avoiding the food-come-alive enemies that try to hurt you. Burger creation isn’t anything like in Overcooked, but sees you walking across the ingredients to push them down to the floor below you. This knocks down any ingredient still there as well, and it’s a process you repeat until the complete burger is assembled at the bottom of the screen. 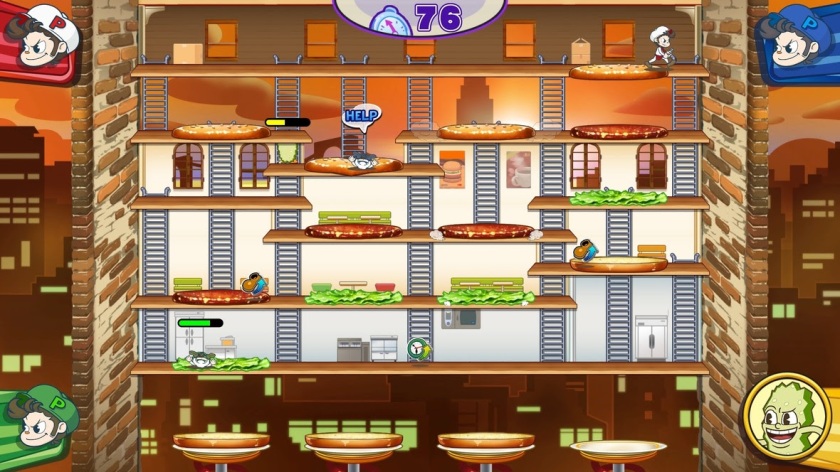 Of course the concept sounds simple, but in its simplicity also lies its appeal. BurgerTime is a game that is easy to pick up, and this new release builds on the foundations of the original to create something truly family-friendly. Gone is the sometimes punishing difficulty of the arcade game (which is of course meant to eat quarters), and instead you get an experience that’s a tad easier but also very couch multiplayer friendly. Fall in battle? You teammate can bring you back – making for a great game to play for parents with their kids.

This family-friendly approach to the classic formula (or should we say recipe?) also translates to the game’s audiovisual presentation, which is colorful and cheerful with catchy melodies and bright visuals. It’s almost cartoon-like to the point of looking a little like Cuphead, though the animations are a tad more wooden in the case of BurgerTime.

BurgerTime Party does an excellent job of introducing players to its mechanics by spoon-feeding players a series of increasingly ‘complex’ levels and challenges, but when it lets you loose on the rest of the game (there are over 100 levels) things feel intuitive even to players who didn’t play the tutorials. They’re a great help to younger players though, so I’d recommend letting them get comfortable with those before moving on to the multiplayer portion together. The game can be played in single player mode as well, and this also unlocks more content/levels – some of which also carry over to multiplayer gaming sessions. 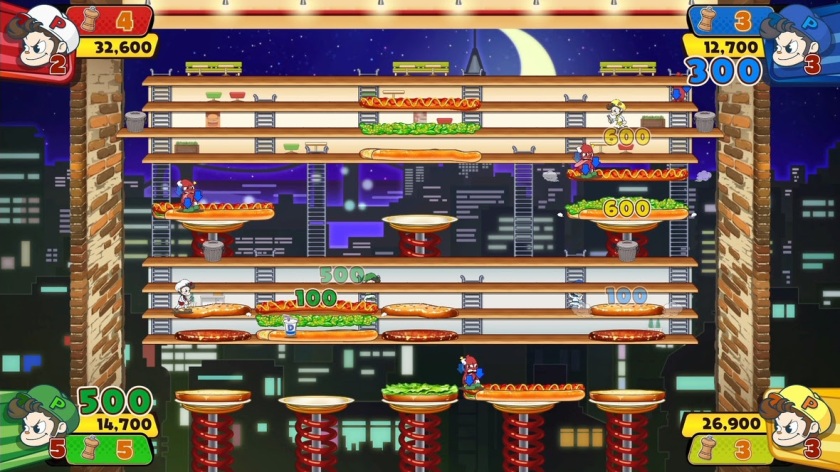 The game actually supports multiplayer action for up to four players at once, but as levels get larger and larger the screen can become a tad difficult to navigate – especially when playing in tabletop mode. TV play is definitely recommended is you’re playing together with friends or family, and handheld mode works fairly well when playing the single player version. However you play, Peter Pepper has a few tricks up his sleeve and you can keep your enemies at bay with pepper spray – but this dynamic between Peter and his enemies becomes especially interesting once you start exploring the game’s ‘party modes’.

You can choose to play with multiple Peter characters and beat the levels that way, but you can also play controlling the evil veggies that are after him – making for fun multiplayer scenarios when you have evenly matched players. If you don’t, then cooperative play is the way to go here, with the aforementioned option to revive a fallen buddy.

With a ton of content, accessible gameplay and a pleasant audiovisual style, this is a great little homage to an arcade classic that can be enjoyed by the entire family.