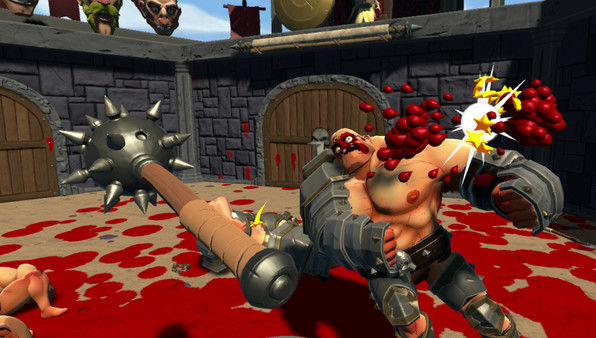 Almost a year after its release on PC, the popular VR gladiator game GORN has landed on PlayStation VR. Developed by Free Lives and published by Devolver, we couldn’t wait to see what had made this such a popular title on Steam.

If you’re not familiar with Free Lives as a developer, then perhaps you’re familiar with their previous titles Broforce and Genital Jousting. Even if you’re not, their titles alone give you a pretty good clue of what to expect in terms of the general tone in their games. GORN is no different, and provides silly VR-based fun within the central premise of gladiatorial battles inside arenas.

As such, it’s no surprise that this is a game where you’re going to be physically active, wielding a pair of Move controllers as you assume the role of a gladiator in arena combat that’s equally silly and violent. With its cartoon style, it’s almost like the classic cartoon Road Runner, but with a ton more gore.

The PSVR/Move control scheme does have its limitations though. Physically moving around is hard on account of the wired nature of the headset, but the biggest problem is the restrictive nature of the Move controllers and their lack of thumbsticks. As a result, you need to hold down the Move button and use the face buttons to turn, which is starting to feel limited now that we’ve experienced a lot of different control schemes in VR – from the wireless nature of the Quest to location-based VR experiences where you’re literally running around, with or without a wire, but even a seated experience with thumbsticks on the controller feels more natural.

Luckily, the motion controls work very well and are a lot of fun. There are many ways to take down enemies, from using your bare fists to wielding one of the weapons from an impressive arsenal. You can really go to town on them thanks to some over the top physics and intentionally wacky animation. And although things get extremely violent, the cartoon-like presentation of the game makes laughter a more appropriate response than one where you reel back in horror. Although no, you shouldn’t let young kids sit in and watch this either.

There’s a great amount of diversity in the weapon roster, which makes for some diverse gameplay as well. Swords are hardly a surprise in a gladiator game and it’s not a big leap to handling a mace from there, but ranged options aren’t far away with the ability to hurl a few knives at your enemies or use a bow and arrow. You can also get creative with some nunchucks up close, or wield two-handed weapons that generate quite the impact. The insane amount of diversity, carnage and silliness make the game a lot of fun, as long as the movement controls don’t get in the way.

A campaign of sorts is on offer, but don’t expect any kind of serious character or narrative development – instead, you’re faced with a series of battles you must overcome in order to progress, and that’s pretty much all there is to it. Just beat countless waves of enemies, and emerge victorious.

You might say that GORN provides a relatively bare-bones experience, and you’d be right. There’s little in the way of gameplay modes or a narrative campaign, with a strong emphasis on gladiatorial arena combat. Luckily, that part of the game is rock solid and a lot of fun. It’s held back ever so slightly by the limitations of the PlayStation Move controller, but not enough to stop it being great fun to play. It’s easy to pick up and hard to put down, although it can be so intense you might want a break before too long.