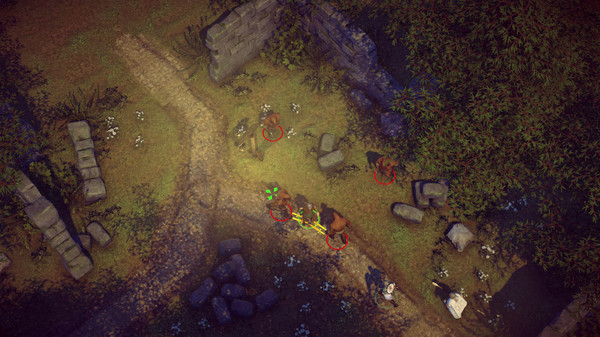 After years of waiting, we finally get another videogame set in the Dark Eye universe. The Dark Eye: Book of Heroes is an RPG that encourages cooperative play and is out now on Steam. Here are our thoughts.

There are a few fantasy franchises out there that stand out to videogame players. Games Workshop has been very prominent with their various Warhammer iterations, and of course there’s always Dungeons & Dragons, which seems to have been around for an eternity as well. And then there’s The Dark Eye – perhaps lesser known but with a few videogame adaptations to its name that I fondly remember. Chains of Satinav and Memoria were two excellent adventure games, and I spent a lot of time playing the two Blackguards games as well, which were story-driven RPGs with turn-based combat. Going back even further, the Realms of Arkania and Drakensang games also belong to the same franchise, some games even dating back to the Amiga era.

The Dark Eye: Book of Heroes takes the license (which is huge in its home county of Germany) and applies a more action RPG-oriented approach to it. As with many games in the genre, you select a character class before you set out and tweak your character to your liking. The narrative is also character-centric in this game, letting you choose a background story for your particular hero after which it serves as a driving force on your adventures. It’s a novel idea and subsequent playthroughs are different even when you pick the same character, though fans of a grand fantasy storyline with twists and turns might feel underwhelmed with this approach.

The game sets itself apart from other action RPG games (like Diablo) by prominently integrating the original tabletop foundations with the gameplay. Expect to see cards being drawn, attack and defense scores being calculated for you while you play and plenty of buff and attacks to be available to you. This can be a tad overwhelming at first, but to anyone who ever felt their tabletop experience was “dumbed down” for a videogame this should be a breath of fresh air. The actual gameplay while in combat is still relatively straightforward in that you click on an enemy and you start hacking away at them, but seeing the tabletop mechanics at work is a fun nod to the source material.

Acting as a hub of sorts, the Black Boar Inn lets you pick out quests, and in between you can upgrade your equipment and boost your character stats there as well using some of the loot you acquired during missions. This area is also where you recruit party members to go on missions with you, although you can also partner up with real-life players through online cooperative play. We didn’t get a chance to try out the latter yet, so we can’t comment on how well it works.

More difficult missions unlock as you go, and your character-specific end mission comes to you much in the same way. This is a clever game design mechanic, though its implementation here is mostly functional and quite rudimentary. The tabletop rules can also get in the way of the narrative at times, because while it might feel opportune to let your party rest for a bit to regain their strength, this also spawns more and more enemies in the dungeon you’re in – making things harder and thus taking away the very reason you rested in the first place.

Still, while the tabletop influence can be a bit bothersome in place, it also enriches the game in other ways – provided that you have an affinity for the source material. Wading through character classes, buffs, new equipment and a wide range of attacks feels like you’re doing the ruleset of the tabletop game justice, although more casual action RPG fans won’t see the benefit and are likely to be overwhelmed as a result. Diablo, or Torchlight, this is not. Those games are probably more fun to play as a videogame experience, but of course have little to do with any kind of tabletop origins.

While we mentioned the lack of a grand narrative and the niche nature of the gameplay, something else that’s currently holding the game back is a lack of polish. The visuals for the game wouldn’t have looked out of place 10 or even 15 years ago, and although we don’t need all of our games to look “next gen” it would have been nice if the experience didn’t have the technical bugs that The Dark Eye: Book of Heroes currently has. The game needed to be restarted a few times, and we also saw visual and AI glitches.

Dark Eye: Book of Heroes has its heart in the right place as an action RPG that tabletop fans would want to play, but it’s not executed to perfection. Perhaps it’s that tabletop games are turn-based and this game isn’t, or perhaps it’s that we didn’t play cooperatively with other, but things never got quite as exciting as we had hoped.