The art of porting games to other platforms is a great way for lesser-known titles to reach a larger audience and get a second lease on life, and a few publishers specialize in this. Sometimes You is one of them, and in today’s indie roundup we look at three recent ports for the PS4 with Aircraft Evolution, Potata: Fairy Flower and Need a Packet, the last of which also got a PlayStation Vita port.

Inspired by Bröderbund’s 1987 classic Wings of Fury, Aircraft Evolution is a 2D side-scrolling shooter that features 40 different levels spread across four different eras in time. You start off at the beginning of the 20th century with a wooden plane facing off against infantrymen and wooden tanks, and eventually end up fighting futuristic battles with planes that haven’t been invented yet. Roughly speaking, you’re looking at World War I, World War II, present day, and the future. 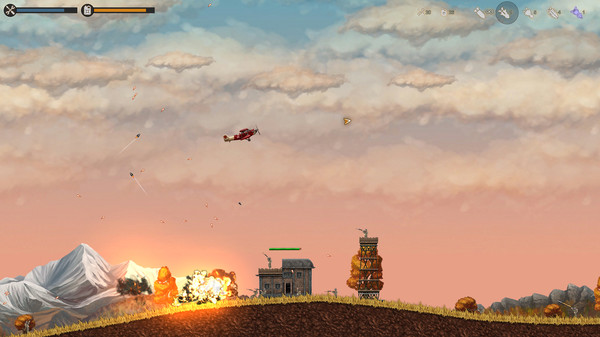 What makes a game like this stand out from arcade shooters is that you’re not just traveling from left to right with enemies coming at you. Instead, you can turn your plane around and go back for targets you might have initially missed, giving you a sense that you’re making runs across the battlefield. The enemies in Aircraft Evolution are also ground-based, so you’ll be making frequent use of bombs in addition to your nose-mounted guns.

The “evolution” portion of the title works in a numbers of ways. The game is evolving over time, so eventually you’ll be able to upgrade to a plane from a more modern era with additional power. You’ll need it, because your enemies also evolve – from wooden tanks in the early 20th century to giant mech-like abominations in the future. Though if you’re really really ambitious you try to take those on with your Wright brothers-like plane as well.

In addition, you can also upgrade the planes you have with things like more armor or firepower, and you can buy a varied selection of bombs – from those that require precision strikes to ones that just carpet bomb the hell out of the surface. The controls take a little while to get used to but weaving through a ballet of bullets and seeing your bombs make impact never stops being fun. It’s a simple enough concept, but for its budget price it’s a nice little game that gets some lasting appeal from its different planes, upgrades and battle scenarios.

An indie platformer that was originally release on Steam at the end of 2019, Potata: fairy flower offers a narrative take on the platforming genre while also incorporating puzzles. The story revolves around Potata, a young witch who goes on a fetch quest for her mother which initially seems innocent enough but quickly turns into a grander tale where there is a lot more at stake.

Visually, Potata is a very attractive indie title with bright and colorful characters and graphics that are very cute and cartoon-like. The animation could have definitely been better (in terms of needing more frames of animation), but with slight echoes of games like Rayman Legends this is certainly a good looking indie platformer.

The delivery of the narrative is done through text only, which is a bit of a shame. For a game that’s high on story and visual atmosphere like Potata, voiceovers for the story would have gone a long way towards enhancing the audiovisual storybook experience to go with the fairytale vibes that the developer has created.

Setting itself apart from other platformers isn’t just the narrative aspect, but also the fact that you’ll encounter puzzles. Their objectives can be a bit trial and error and you can pay a fee to skip them, but puzzle game fans should definitely enjoy Potata because the platforming elements are relatively casual in nature. I wouldn’t call this is a puzzle platformer though, since the puzzle gameplay isn’t really integrated into the game. Instead, it’s a platformer where you come across a puzzle every now and then. There are definitely better platformers out there (with tighter controls) and you can also find better puzzle games, but as a casual kind of platform game with some clever puzzles this is an interesting mix that’s helped by its delightful visuals.

First released on PC back in 2018, “Need A Packet” is certainly a bit of a strange game best geared towards those who enjoy a bit of experimental gameplay design. You play as Molly, who lives an apparently mundane life working as a cash register clerk at a grocery store. Every day, you get dressed in your apartment, go to work, do your thing and go home.

That may sound a little pointless, and the nature of the gameplay is echoed in that sentiment. On the bus to work you check a few messages and video streams, and you have the option to order items. Once at work, you check out a random selection of items for each customer, and go back home at the end of the day. Over the course of the first few days, you gradually learn new aspects of your job as well, like checking a customer’s age when dealing with alcohol or manually entering codes for certain fresh food items that you can’t scan. Oh, and you always ask customers if they “need a packet”.

Over time, Molly begins to lose her sanity, and starts seeing weird things happening around her. Are the events you read about real, or just figments of your imagination? The city around you seems to be falling apart, but are you somehow connected to all this with the packets you give out at your work?

This certainly isn’t a narrative-driven game in the traditional sense, and it’s hard to shake the feeling that you’re playing something weird rather than something fun. It’s intriguing enough to stick with for a playthrough, but ultimately not as riveting as you’d hope because the bulk of what you do in the game is still very mundane in nature. That is partly the point, but I didn’t want to go back in and do it all over again just to experience more of the story surrounding me.