After a surprise announcement, Studio MDHR’s hit run and gun game with visuals inspired by the classic cartoons of the 1930s has landed on the PlayStation 4. We take a look at Cuphead, which is now finally available on every current gen console out there.

Although the PS4 has been immensely successful for Sony with an absolutely stellar library of games, a handful of games felt like they were missing. I’m not talking about Nintendo exclusives like Mario or Zelda or Xbox hits like Halo or Forza here though – that’d be naive. But seeing games like Ori and Cuphead head to the PC and Switch and passing the PS4 by did feel like a shame, and it’s great that – at least for Cuphead – that’s now been fixed.

Of course you can’t talk about Cuphead without discussing its absolutely unique visual style – even three years after the fact, I can’t tell you about any other games that come close to it. We’ve had plenty of cartoon-like platformers (like Rayman), but the way that Studio MDHR’s game brings classic hand-drawn cartoons to life in an era of digital animation is enchanting to look at. 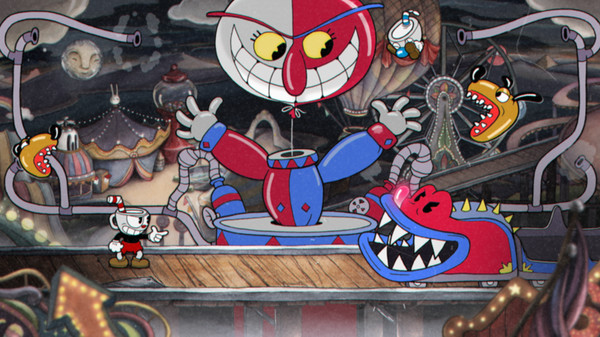 I think my closest point of reference is probably Mickey Mania, which is now over 25 years old and let gamers visit scenes from classics like Steamboat Willie through a variety of levels. It was similarly cool at the time, but the actual implementation was of course much cruder in terms of the quality of the animation that a SNES could put out. Cuphead consistently throws eye-popping animations and colors at you – almost to the point where you feel like a black and white mode would be a nice retro-delight as well. Luckily, there’s a secret mode in the game that lets you experience just that!

Unlike games like Mickey Mania and Rayman, Cuphead isn’t a straight up platformer but more of a run and gun action game with a lot of boss fights. There are platforming sections that you need to traverse to get to some of these bosses, but their design is more akin to arcade shooters like Metal Slug than they are excellent platformers like Rayman or any of the 2D Mario games.

Bosses don’t just look visually unique, they also each have their own attack patterns, which you’ll need to take note of if you want to have a chance of beating them. Cuphead’s a challenging game, but never to the point of feeling unfair even when frustration starts to set in. Learn the patterns, exploit the weaknesses, and eventually you’ll get them.

Content-wise and in terms of the visual fidelity, the PS4 version of Cuphead is identical to what players got on the Xbox One and PC. I’m assuming the Nintendo Switch version isn’t too far behind either, but I can’t attest to that since I haven’t seen it in action. The music is also excellent, and fitting of the action that’s on-screen. The upcoming “Delicious Last Course” DLC hasn’t been included yet, and is still coming at a later date in what we assume will be a multi-platform launch.

If you haven’t had the chance to play Cuphead yet because you were confined to a PS4, then this surprise launch is great news. The game’s still every bit as remarkable as it was when it first launched, especially from an audiovisual point of view. We kind of wish the platforming sections were more refined/inspired since the art style is such a great fit for it, but we’ve had a blast getting through all the bosses and enemies that the game has to offer and can’t wait for the DLC.