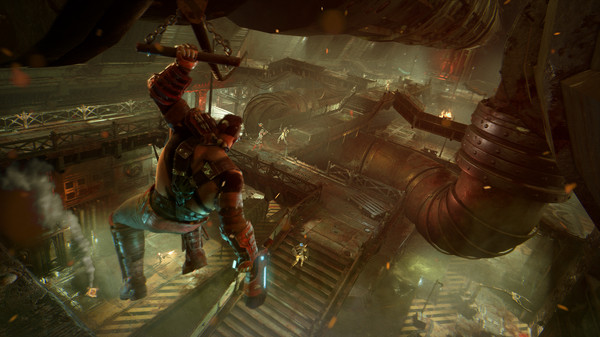 Necromunda: Underhive Wars is the digital take on one of our favorite Games Workshop tabletop games, and one we’d been eagerly looking forward to. Out now in consoles as well as PC, we played the Steam version for our review.

Although Games Workshop titles can be found all throughout gaming, with multiple publishers holding licenses. Focus Home has released a number of GW-inspired titles already, and this particular one is from the same team that brought us Mordheim: City of the Damned five years ago: developer Rogue Factor.

As with Mordheim, Rogue Factor has given Necromunda: Underhive Wars a third person action RPG look and feel on top of a turn-based strategy model for the gameplay. Necromunda takes this even further, by giving you a degree of freedom to move around until you hit the moment where you engage in combat and transition to turn-based combat – in a way, it’s a bit like a JRPG in that sense. 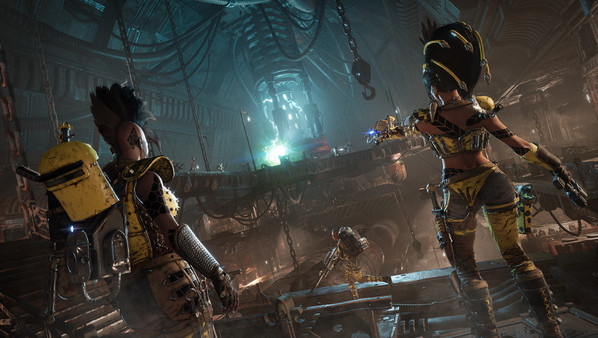 But where a lot of JRPGs excel in the story department, as does the Necromunda table top experience through its lore, the story content in Underhive Wars is disappointing. Fans of the Games Workshop original will be delighted to see the houses of Orlock, Goliath and Escher being featured, but the narrative feels underdeveloped as it merely skims across the surface of what Necromunda offers. The delivery of the story doesn’t help either, with less than impressive visual direction and ditto voiceovers. Cutscenes are nice, but there’s little during gameplay to draw you in and keep you engaged.

Considering that I was looking forward to seeing the Necromunda universe come alive in a digital form (with so few opportunities to play in real life), the lackluster campaign is a big disappointment. Luckily, the combat itself fares better, though it’s far from perfect. There’s a momentum/initiative mechanic that determines who moves first, and because you have a choice in which characters is kicking off a turn for you this becomes a small strategic decision that creeps in at the start of every turn. Moving first can mean you gain an advantage, but it may also rule out the opportunity to pick one of your stronger characters.

The freedom of movement you get for your characters is a nice mechanic that works well with the third person control you get outside of turns, as you can freely move around and retrace your steps until you’re happy with a move that puts you in a good position to spend action points in. And as with the table top game, Necromunda features plenty of verticality, letting you explore the options to position your troops to your heart’s content before moving. A new mechanic is that you can also trade in movement points for additional attack points, which makes planning ahead important.

The actual combat is where the depth of the table top original and its lore works against the game though. During a physical game, these mechanics would be your way to carefully chip away at a stronger enemy’s health, making the best possible use out of the (de)buffs that the cards give you and your opponents. In the videogame, without the banter and without much of the lore to help you understand why even a small amount of damage being dealt is a good thing, the on-screen combat can feel underwhelming. A learning curve ensures that eventually you’ll start combining buffs with your attacks in order to take down enemies quicker, but you’ll have seen most of the campaign already at that point.

All of this mostly related to the single player experience – Necromunda no doubt fares better in multiplayer where you can either play cooperative or competitively and bring back some of the banter and lore yourself. In that sense, it’s a decent enough alternative to the table top experience as long as you don’t have someone to play a physical game with, but you’ll need to bring your own Necromunda experience to make it worthwhile – and that mostly applies to the lore because the gameplay mechanics are different.

For others, the turn-based combat of games like XCOM feels far more refined and impactful, and frankly more fun to play. Necromunda’s custom gang option feels a bit like the base-building aspects from XCOM 2 and although the prospect of doing something similar in the Necromunda universe still feels like an exciting prospect, the combat needs to feel less like a grind for that to work. Add a range of technical issues to that, and Necromunda: Underhive Wars isn’t what we were hoping it was going to be.