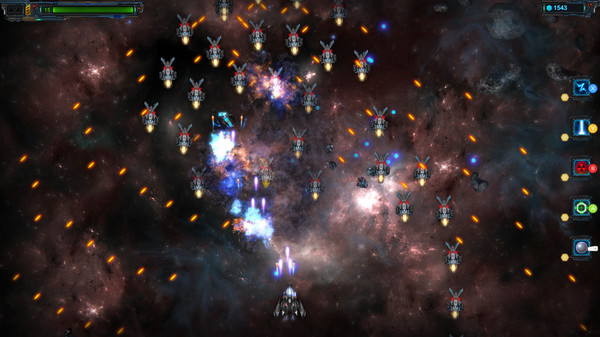 Today we’re looking at three recent releases that may have escaped your attention – the console ports of arcade shooter I, AI and Speaking Simulator as well as 10tons’ latest game Tesla Force.

Billed as a classic arcade shooter with modern graphics, I, AI is out now for Xbox One, PlayStation 4 and the Nintendo Switch, after an earlier PC release on Steam. Initially developed by Satur Entertainment, the ports were handled by Sometimes You and we tried out the PS4 version.

In I, AI, you play the role of (how did you guess?) an AI, one that’s become self-aware and wants to break out of the lab you were created in – the usual razor-thin setup for a scrolling shooter that makes little sense when you think about it for too long. This one scrolls vertically, and ticks many familiar boxes along the way – with upgradable weapons, ship loadouts and superweapons and a range of boss fights spread across 20 different levels.

The gameplay is rather formulaic in nature, catering to retro arcade shooting fans with its familiar recipe of blasting through waves of enemies before facing a boss at the end. Your performance is ranked with 1 to 3 stars based on hit ratio and pickups – the latter also being important in terms of upgrades. Since they are expensive, I, AI can feel like a bit of a grind – which is a home console thing that makes the experience feel a little less-arcade like but pads out the time you’ll spend playing the game. It gets more and more difficult over time, so you’ll eventually find yourself in a grind (where you keep part of your earnings even when you die and have to restart).

While I, AI certainly looks more modern than the classic arcade shooters we all know and love, I didn’t get the sense that things have evolved much since the days of Gradius V on the PS2, and a game like Sine Mora EX for the PS4 looks much better than this one does. Both of those are side-scrollers though, and it’s more fair to compare I, AI to the likes of Raiden V. While it’s not as good (or as pretty/diverse) as that game, it’s a serviceable shooter released at a budget price point.

Originally developed as Tesla vs Lovecraft 2, 10tons’ new game builds on the studio’s expertise to craft arcade-like experiences that are easy to pick up and play, even in short bursts. A twin-stick shooter with roguelike elements, Tesla Force brings the historic figures of Tesla, Curie, Lovecraft and Shelley together in a game that even supports 4 player co-operative play.

And while Lovecraft isn’t a titular character this time around, the creatures you fight certainly do look feel very Lovecraftian in nature. Your weapons in this fight are very much Tesla-inspired though, with plenty of high energy weapons, and while you’re playing it’s easy to see the Tesla vs Lovecraft origins of the game.

Tesla Force is a bigger and brighter experience though, but I’m inclined to say not all of the changes are for the better. Visually it’s certainly a step forward, with a more isometric point of view doing a better job of highlighting additional detail, and superior lighting and shadow effects. It’s hardly what you’d call a next gen experience, but the jump forward is easy to see.

The game also features more weapons, enemies, power-ups and perks you can use, and missions are defined by objectives that divide them into four categories. So far, so good, with a lot more Tesla vs. Lovecraft to enjoy, but the game also features procedurally generated levels, and while they’re designed to being increased replayability they mostly gave me the sense that I was just repeating the same cycle again and again. Because the objectives aren’t narrative-driven but generic (of the “survive”, “collect” and “kill” variety), missions often blend together, especially because Tesla Force doesn’t have that “quick session” appeal that Tesla vs Lovecraft had.

The biggest appeal, therefore, is the ability to play the game in 4-player co-op. If you enjoyed games like Helldivers, you’ll certainly have fun with this one as well. As a single player game, Tesla vs Lovecraft felt like a tighter experience.

In an era full of remasters, remakes, sequels and spin-offs, few games feel truly unique. Speaking Simulator, from Affable Games and Hard Copy Games, certainly is an exception to that rule. Almost a year after its initial release on Steam, the game has now found its way to console systems, and we tried out the PS4 version.

Having played Speaking Simulator, I feel that Human Interaction Simulator would have been a better name for the game, as “what would a human do?” is the central question in the gameplay and narrative here. You play as an android/robot looking to blend in with society, and the game plays out through a series of awkward situations that you need to navigate your (customizable) robot through, from a romantic date to something as bizarre as a eulogy given by a robot.

In a way, Speaking Simulator feels like a collection of comedy skits, with bizarre situations and crazy stuff that happens while you try to maintain the facade of being an actual human. You do this by controlling your body/fact through intentionally unwieldy controls, which although frustrating often result in hilarious outcomes that immediately raise suspicious levels for whoever sees it. For some reason, seeing an eye fall out makes people uncomfortable.

Later upgrades allow you to be even more lifelike, although your basic “controls” all come from pressing buttons and triggers inside your mouth – with your tongue, of course. It’s a very silly concept that works because of some fun writing and ditto animations, but once you’re played through what are essentially just ten mini scenarios there is little reason to come back. Flawed from a gameplay perspective, but a fun experience nonetheless.