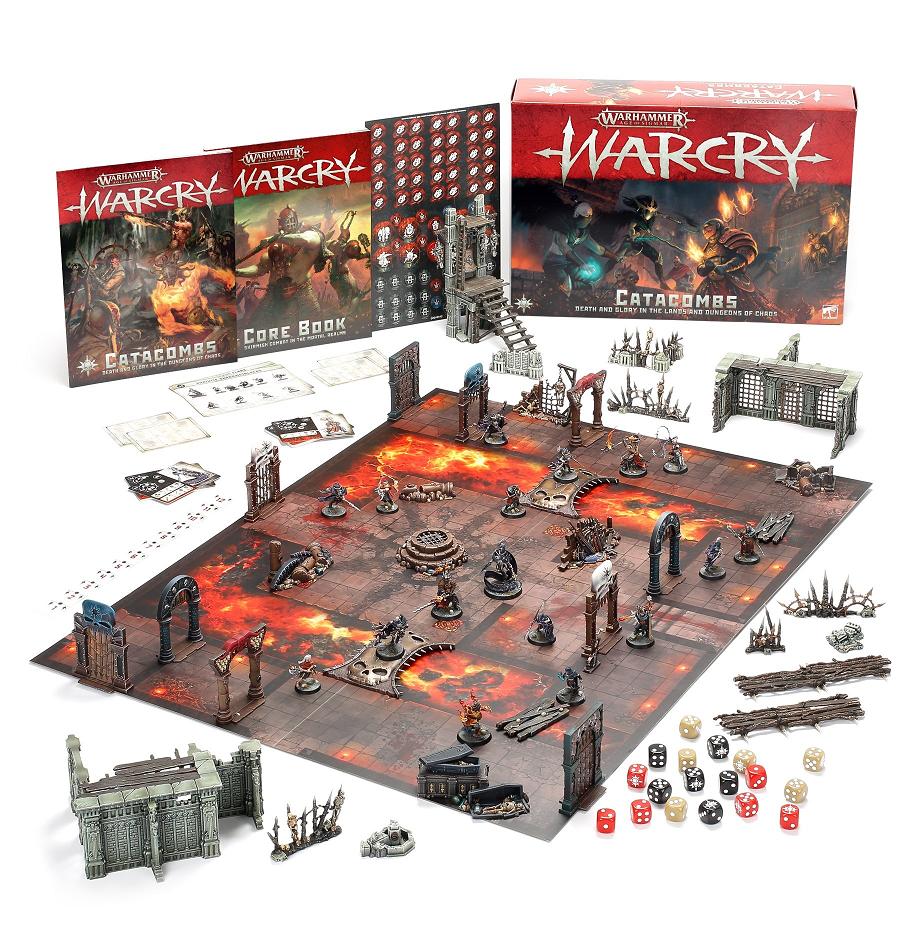 The holiday period is traditionally a period for seeing family and friends, and staying indoors while enjoying good food, company and games. Now that we’re traveling less and have a bit more time on our hands in 2020, it’s a good opportunity to take up a new game – our game of choice is Warcry Catacombs, which is an expanded re-release of the game that Games Workshop put out last year. Time for a closer look.

Warcry Catacombs sits somewhere in between the base Warcry experience and a new expansion, because this new boxed set contains both the original rulebook and the new rulebook for the Catacombs expansion – as well as the game pieces that let you play either variation (original or Catacombs), where flipping over the game map is all it takes to switch between the two.

The two original armies aren’t included, but two new ones are, and they can be used for either a base game of Warcry or the Catacombs version, making this is a very versatile boxed set for newcomers to jump into. For existing players, it’s a double-edged sword, because although you get two new armies and a new ruleset to play with, the ‘upgrade’ also comes with some of the stuff you already bought a year ago (like the core rule book).

What’s in the box?

When you look at the Warcry Catacombs box, it certainly is a bulky specimen. Opening it up reveals why the box is large and heavy, as Warcry (unlike the Warhammer 40K sets) also features a good amount of scenery items. We consider this to be a big plus, because although real enthusiasts will have no problems imagining the 40K world if they’ve not already built one for the game, having scenery included in the box is a huge help in conveying the look and feel towards newcomers.

On top of the rulebooks (the core one and the Catacombs edition), you also get three sets of six color-coded dice, a selection of tokens, a measuring stick to help determine the distance between units and the aforementioned double-sided game board. In addition, the scenery items include a host of dungeon doors, levers, ruins, barricades, bridges, levels and assorted terrain items – which we thought were a big help in making the game come alive on top of offering strategy impulses to the gameplay.

The stars of the show, however, are the two new warbands: the Scions of the Flame and the Khainite Shadowstalkers. Both feature some great character designs, some of which feature very intricate details. The downside is that they can feel a bit more fragile because of lots of elements that stick out or are quite narrow, so assembly (especially the first step of cutting all the sprues loose) is something you have to be careful with.

The Shadowstalkers in particular have plenty of more fragile parts, but they’re gorgeous models that blend a dark kind of fantasy with elf-like features. The Scions of the Flame are more sturdy in their design, as a group of religion-fueled warriors that worship (you guessed it) the power of fire. With their warrior monk-like appearance, they form a nice contrast with the almost ethereal Shadowstalkers, and that translates to the gameplay as well.

As mentioned, the game board is double-sided, with one side reserved for the Catacombs expansion. The included scenery items reflect this, and although you don’t get everything that was in the original Warcry box you still get a few items that are specific to ‘vanilla’ Warcry sessions. Other items are meant for the Catacombs variant, which as the name suggests takes place underground, in what is a setting that fits extremely well with the Warhammer lore – a world of stone and fire.

The scenery that you’ll use in setting up a game looks spectacular as well, from the intricate details of fairly “standard” elements like doorways down to a gorgeous bell tower, which not only looks great but also adds verticality to the game. Skulls, coffins and chain paint a picture of what’s not a happy place even before you start playing – which in general is a part of Warcry that makes the experience much more appealing to look at for non-players than a game of vanilla 40K. The scenery also adds verticality right out of the box, which is another plus.

Almost any Warhammer game has a rather lengthy initial setup because of the construction that’s involved, and Warcry is no exception. Even without painting the miniatures, don’t expect to be up and running in an hour – assembling everything took the better part of an evening here. Luckily, most of that is a one-time affair, and the actual game can be set up in a few minutes with complete scenery pieces and warbands.

What also helps is that the rulebook for Warcry is very good, making this one of the easier to learn games from the studio. And although there’s going to be the temptation to start playing Catacombs, it’s smart to get the basics down first – even though that rulebook is quite a bit longer than the 60 or so pages for the Catacombs book. Luckily, both books are full of artwork and lore as well, and the actual gameplay rules aren’t as daunting as the number of pages would suggest.

Included in the books are a few quests for your warbands (some of which are specific to one warband while others are more generic), as well as a battleplan generator to help you set up and manage games, though the book also refers to alternate dungeon locations that have to be bought separately if you want to play them. 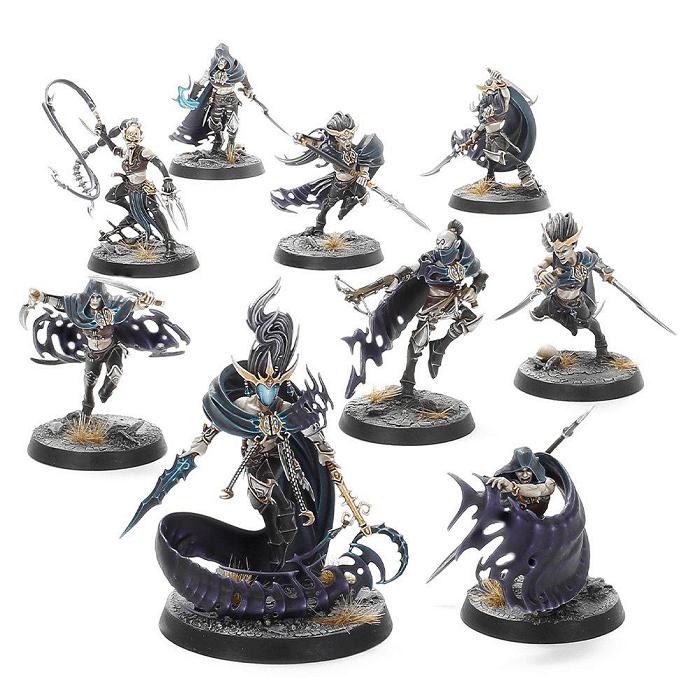 When playing Catacombs, it’s nice to learn that it doesn’t needlessly complicate the rules of a basic Warcry session. Whenever new rules are being introduced it means you’re not using some of the older ones, which is a nice trade-off not just in the sense that is makes this manageable in scope but also refreshes the entire gameplay somewhat.

What’s fun is that the way the board is set up before each match is actually part of the game as well, where players get to strategically position pieces on the board. Players take turns doing this, and knowing which warband you’ll be playing with will impact your decision-making – trying to craft a set that benefits your abilities while hindering those of your opponent’s warband.

Gameplay is further tweaked by “twists”, which change the rules for a specific session and can really sway the way you thought you were going to approach a battleplan/scenario and the terrain. All of this creates a solid amount of replayability, and we’re still learning about the various nuances between the warbands and about how to use them to our advantage. The Scions of the Flame are definitely more newcomer-friendly, but the increased agility and ranged capabilities for the Shadowstalkers certainly add options for advanced strategies that present itself over time as you play through more and more scenarios.

If you’re finding yourself staying home for the better part of the holiday break, then Warcry Catacombs is a great game to get into. It’s certainly not something to pick up and play once, but rather a game that gets better as you keep playing and slowly unlock more and more of the gameplay depth that lurks in the catacombs. For existing players it’s a bit of a steep upgrade, but there’s a lot to love for newcomers.