Olija is Devolver’s latest indie release that’s being brought to us as a multi-platform release after Skeleton Crew Studio developed it. It’s out for all current/next-gen consoles as well as the PC, and our review is based on the PS4 version.

With a title that didn’t mean much to me when I first saw it, Olija mainly stuck out to me because of its striking pixel art visual style combined with some intricate animation work you rarely see in the pixel art genre. Luckily, there’s much more to it than that, and it’s a great game to play as well, with a great (albeit short) narrative to play through.

You play as Lord Faraday, a man shipwrecked in a foreign land along with some of your crew. It’s not a friendly place, and you’d love to return home, but luckily you have a powerful (as well as magical and/or cursed) harpoon weapon to help you achieve that quest. You eventually run into the titular Olija as well, a mysterious lady who lives on the island and whose fate is bound to yours somehow.

A classic adventure story, the narrative is well paced and effortlessly blends combat and puzzle gameplay as you explore the island to try and find a way off, interacting with some less-than-friendly locals along the way. Whether it’s combat or puzzles, your harpoon plays a big role, and even acts as a way to teleport/propel you across large distances and traverse the area. Over the course of the game, you also unlock new abilities for the harpoon, keeping it fresh for the entire duration of the story.

The harpoon also makes for a pretty brutal and satisfying weapon in combat, as you plant it in an enemy’s chest and then propel yourself into them for a devastating bit of extra impact. Because of the pixel art style it certainly doesn’t look as gruesome as Scorpion’s moves in Mortal Kombat 11, but it certainly makes for some impactful and visceral combat. You can mix it up with secondary weapons as well, but their main purpose seems to be your ability to diversify a bit, since the overpowered harpoon is plenty powerful in getting through most combat scenarios with pretty much any secondary weapon you choose. Boss fights can be an exception, as they’re designed in a way that requires you to think creatively about how to get past their attacks and exploit their weaknesses. 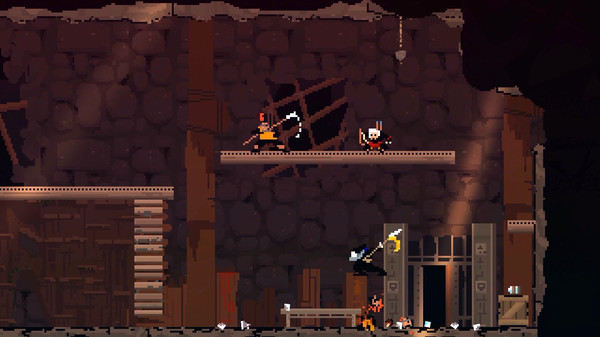 Olija isn’t a solo adventure in the sense that you can just head straight for your goal and escape – you also have crewmates to rescue, and your ‘safe zone’ grows over time and allows you to upgrade. Progressing also gets you access to magic hats that grant you special powers, some of which can be extremely helpful during boss fights depending on how well your currently selected hat counters the abilities of a particular boss.

Completing Olija will take most players about eight hours or so, which is a good length for a game in this price range. Any longer and the game and its narrative would have also lost momentum too, and eventually the fun and stylish combat would have started to feel shallow. As it is though, it’s one of the better pixel art style adventures out there.