We’re taking a look at the recently launched Windfolk, which is a PlayStation exclusive under the PlayStation talents banner, which has seen a lot of releases coming from Spain in recent months. This one’s no exception, hailing from developer Fractal Fall, which is based in Madrid.

Windfall, or Windfall: Sky is Just the Beginning as its full name is, is an aerial combat-based shooter from a small indie team that grew out of an earlier student project and was allowed to be developed into a full game. It features the “Windfolk”, which are people living in a world of floating islands that rely on a mysterious element called Trydian. Long cherished among their culture, their land is now being mined for its resources by a military-focused Coalition.

It’s a bit Avatar-like in its setup, and the story casts you as Esen, a young woman destined to rise up against the Coalition as part of the resistance, armed with an energy rifle and a jetpack. From there, although you can also walk, much of the action is airborne – with you flying, dodging and teleporting across each level in the game. 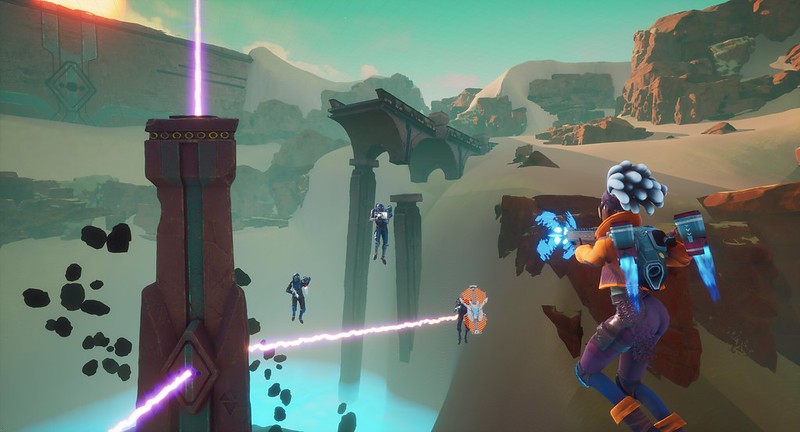 The flight mechanics work very well, but the shooting is hit and miss. There are a few interesting elements when it comes to gun selection where careful timing can help you get a few more shots off, but none of it flows naturally between dodging, shooting and aiming. The latter is barely needed as well, since the difficulty level is quite generous and the enemy AI is lacking when it comes to their ability to dodge and get out of harm’s way. It’s fun, but it’s not exactly deep and won’t keep you coming back for long.

There are only eight levels/story chapters in the game, but they’re of decent length and certainly look attractive for a production from such a small team – featuring wide open areas as well as narrow caverns. The arena-combat nature of the gameplay makes Windfolk feel more limited than it should be though, as the flight mechanics feel liberating until you realize you’re relatively confined.

The story is told through in-game dialogue and suffers from either so-so writing and/or poor translations when experienced in English. Once you complete the campaign you can dive back in through an arcade/challenge mode as well, but ultimately Windfolk isn’t going to be much more than a diversion. Its core gameplay is too basic, but for a budget price you’re getting some impressive visuals and ditto music in an ambitious indie title that features solid flying mechanics.

One thought on “Windfolk review (PS4)”