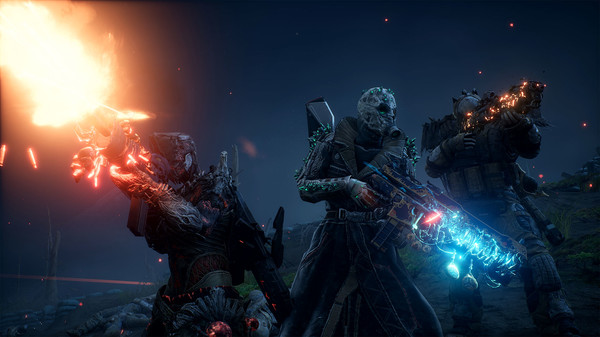 The new Square Enix looter shooter IP Outriders has arrived on consoles and PCs, including next gen versions for those with the latest flagship consoles. We playtested on the PlayStation 5 and also gave the PS4 version a run to see how it compared.

The looter shooter genre has gotten pretty crowded over the years, but when you think of major franchises it’s hard to not just name Destiny and Borderlands as the prime examples – especially when it comes to narrative-driven experiences. For a major publisher to jump into the genre is pretty rare, but Square Enix enlisted the help of People Can Fly. The Polish studio has already earned their stripes in the shooter domain with titles like Painkiller and the very entertaining narrative-driven Bulletstorm, so expectations were high for Outriders – which from the trailers looked a bit Mad Max-like to us. Not a bad setting at all.

The narrative setting fits that first impression – all of the major story characters have a rather bleak outlook, and mostly for good reason. The world around them was dying so they’ve set out for a new and brighter world, but the journey there isn’t without peril and adversity. There’s plenty of death in the various story beats, as is People Can Fly wanted to hammer down that this is a brutal world you find yourself in. 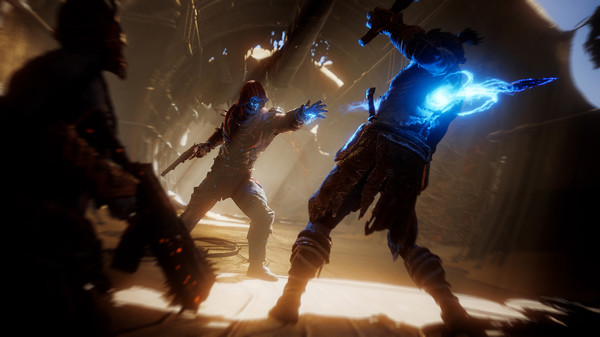 The story is important here, because Outriders has a different structure than a game like Destiny does – even though there’s an online component (three player co-op is encouraged), Outriders wraps up its own story neatly at the end, and any DLC will depend on how well the game does. This isn’t a live service game in the sense that Destiny is, which for people who prefer jumping from game to game is a definite plus.

Central to the story is the “anomaly”, which is changing the physical shape of men who arrive on their new home of Enoch. Unsurprisingly, these changes mostly relate to combat, which is how the bulk of the story in Outriders unfolds. It’s essentially a frontier story, a bit like the old Wild West but in a sci-fi setting and with a few RPG influences.

You’ll see these in the game’s character classes, which have roots in typical RPG tropes but are called Technomancer, Pyromancer, Trickster and Devastator here – you’ll be able to guess what’s what. They’re as different from one another as you’d expect, but progression is rather streamlined and doesn’t get in the way of the shooter action. In a way, it’s like Bulletstorm was all action despite some interesting new mechanics. That free-flowing action, no matter which character you pick, can also be seen in the gameplay, where kills net you a bit of health without the need to go and look for medkits.

The focus on action means that the story and lore take a bit of a back seat at times, but the core shooting loop is very satisfying so it never bothered us. Side quests serve the obvious purpose of making you stronger in combat, but the game world never feels as “open” as Destiny does – which isn’t a bad thing because I’ve lost my sense of purpose in Destiny on several occasions. Here, there’s a 20 hour campaign to blast your way through, and the way that both core and side missions are structured means that you’re constantly pushing forward, even when you’re in a bit of a looter loop for a while.

The campaign itself doesn’t feature a whole lot of mechanics that you’d typically associate with looter shooters besides the obvious selection of a loadout from whatever you just picked up – the more elaborate mechanics are something that comes into play more in the endgame content that’s based around Expeditions. Here, harder difficulty levels mean bigger rewards, and team-based play is encouraged (whereas everything feels gradual and streamlined in the main campaign). Time will tell if people are going to stick around for the endgame content long enough to keep developing Outriders into a live service, but you can also play the core campaign with one or two others and that’s definitely fun and something we wouldn’t mind playing through again.

What helps in that regard is that the PS5 and PS4 versions come bundled, and if you kept your old PS4 that means you could even play local co-op with the help of a second screen. There were some connection issues after launch that prevented us from following through with that at this point, but we’re assuming those will be solved before too long. Unfortunately the connection issues also affected single player gameplay, which was an especially big bummer.

Much like Bulletstorm, Outriders doesn’t do things in drastically different ways from what we’ve seen before. And much like Bulletstorm, it’s extremely entertaining to play with few frustrations besides the obvious technical issues post-launch. As a single player game this is unlikely to impress you for long past its fun campaign, but Outriders succeeds as a third person co-op shooter that will keep teams coming back for more.