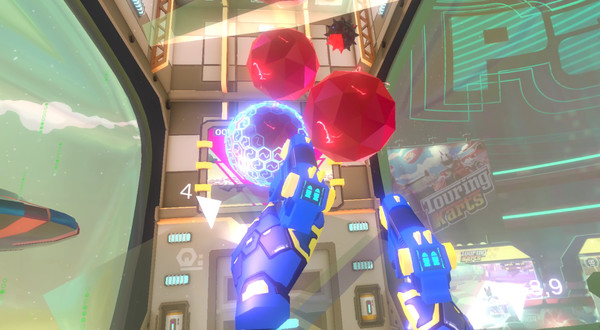 We cover a lot of VR, and wanted to highlight three smaller releases that recently came out – including two AppLab titles for the Quest with Pangman and Alps Descent VR as well as a port of Boxed In for PlayStation VR.

We’ve gotten to know developer/publisher Ivanovich Games as a bit of a VR pioneer when it comes to translating classic arcade experiences to the virtual reality domain. After Operation Warcade (Taito’s Operation Wolf) and 1976 – Back to Midway (Capcom’s 1942), their latest game is based on the classic Mitchell coin-up Pang. And if the title wasn’t enough of a giveaway, your protagonists in Pangman are the Buster siblings – Buster Bros being another title under which Pang is known.

If you’re not familiar with Pang, then the concept is simple. Bouncing spheres need shooting, and if the spheres are big enough they’ll break up into smaller ones first. Get rid of all the spheres, and you beat the level. It’s originally a 2D game with single screen levels, but the VR equivalent takes the concept and translates it to 3D rooms that you need to clear – with your Touch controllers acting as harpoon-shooting guns. 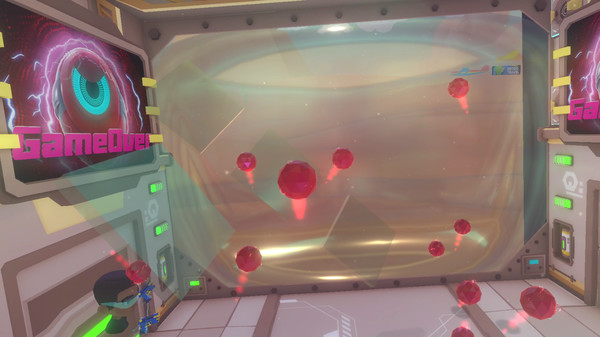 There is a great deal of content in Pang brothers, which (like the original) breaks up the action between various locations. There are a total of 140 levels, and new gameplay mechanics mix things up over time. Some spheres will have shields that need to be taken down first, while others need multiple hits to take down – and that’s not even mentioning the boss fights that you’ll encounter after every ten levels or so.

You can play cooperatively with two headsets (which only requires one copy of the game), and the game can be played either sitting down or standing up in a small roomscale environment – the latter is definitely recommended as it lets you physically dodge the bouncing spheres as well. And to add to the fun, the developers have also included plenty of silly little pop culture references to the game, including a story that ties into The Matrix somehow. After an earlier release on Steam, you can now grab Pangman on Oculus’ AppLab store for the Quest as well.

Boxed In – now on PSVR

Boxed In, from developer/publisher Red Chain Games, is another VR title that was previously released on Steam, way back at the end of 2017. It’s recently made the jump to PlayStation VR though, which after Sony’s recent PSVR2 announcement is increasingly becoming a creative outlet for smaller/indie titles – often available at budget prices. 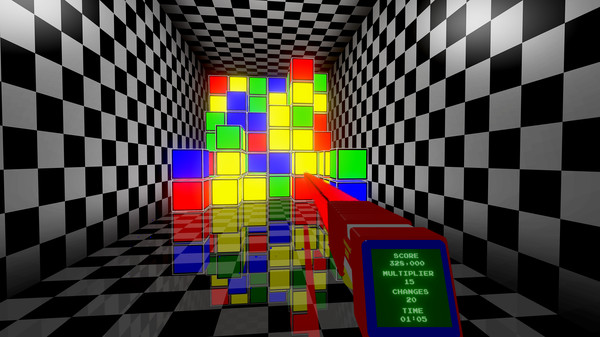 In terms of first impressions, Boxed In immediately reminded us of Welltris, Alexey Pajitnov’s lesser-known Tetris sequel that placed you in a 3D environment but still tasked you with matching up blocks. At its core, this one is quite similar, though not in the sense that you’re placing Tetris blocks onto a grid. You can play the game in a more stressful ‘survival’ mode or enjoy it ‘solitaire’, which is the best way to get comfortable with the mechanics and controls.

Matching blocks/color can be done through lines or square formations, and with a free choice between the two you essentially have multiple gameplay modes inside ‘solitaire’ as well. You can also tweak the experience further by selecting how many different colors you want the blocks to be – ranging from three to five, with more colors offering more of a challenge. More of a novelty is that you can select which surface area you want to play on as well, though I found that “the far wall” was the most comfortable one to play with. 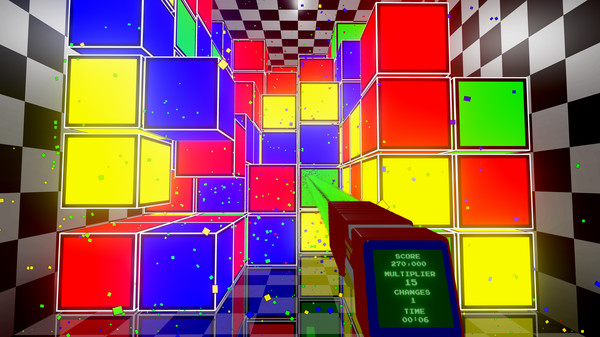 The controls are easy enough, but take a bit of getting used to if you’re expecting a more stationary experience (like Welltris). With one hand you’ll control a teleportation device that lets you move around, while another has a multi-functional gun that you can use to either change a block’s color, push it or add blocks. As with Tetris/Welltris, removing a few blocks can also trigger combos when other ones suddenly fall into place, so as long as things aren’t too frantic it’s worth seeing if you can line up a couple of pairs all in one move for additional points. Survival is more closely tied in to Boxed In’s name as it features walls that move towards you for more time pressure, so it’s a natural next step once you’ve gotten comfortable with the game.

Visually, Boxed In is quite basic, so it’s not surprising that it performs well on the PlayStation VR headset. Since it resembles a 1989 game that’s hardly surprising, but it does make for a pleasant yet all-too-familiar, almost casual experience at times. It’s not The Tetris Effect, but certainly a nice ‘pick up and play’ kind of game in the same genre.

As with Pangman, Descent Alps VR for the Oculus Quest is exclusive to the AppLab store at the moment. It brings skiing to VR, which is an experience we hadn’t had before – unless you’re counting that Ski Jumping game we reviewed a while back.

Playing Descent Alps VR on an Oculus Quest 2 definitely felt like a new and eye-opening experience – one that’s gotten rare now that VR has become relatively ‘mainstream’. A lot of that has to do with the game’s movement system, which takes a real-life experience that you wouldn’t associate with VR and makes it believable and immersive by placing a lot of emphasis on body movement. 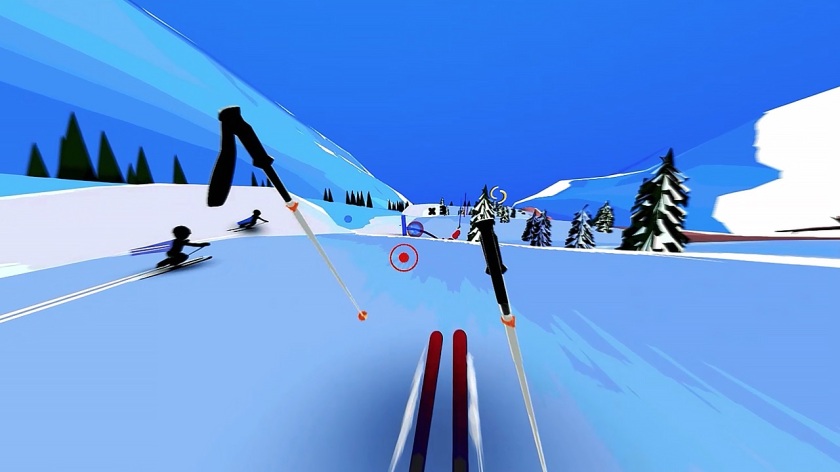 Sure, you can’t work your legs and shift your weight like you normally would if you were on skis, but leaning and using your hands to carve out your course with your virtual ski sticks and speed up by hunching forward definitely felt believable and fun while doing it. And although you can freely ski down the included slopes, you can also do so to the rhythm of the included (synth-style) audio tracks, with obstacles that are timed to the rhythm and pace of the music. It’s not just memorization either, because although the music and timing of the obstacles stays the same, the path between them is randomized each time.

The game is also surprisingly intuitive to play, making it a fun experience to share with friends who don’t have a ton of VR and/or videogaming experience. With ten slopes to play on, two training courses and three different ways to play (in addition to rhythm-based and free play you can also play ‘endless’), this one offers excellent value for money at its €10/$10 asking price. 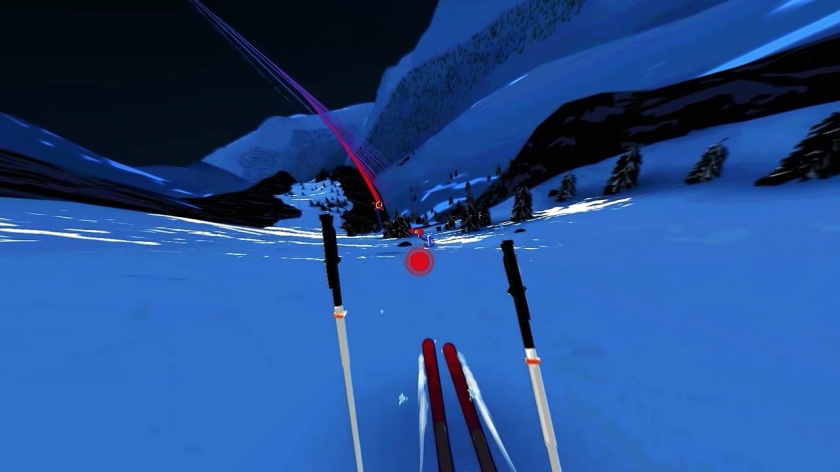 One thought on “VR Roundup: Pangman, Boxed In & Descent Alps”