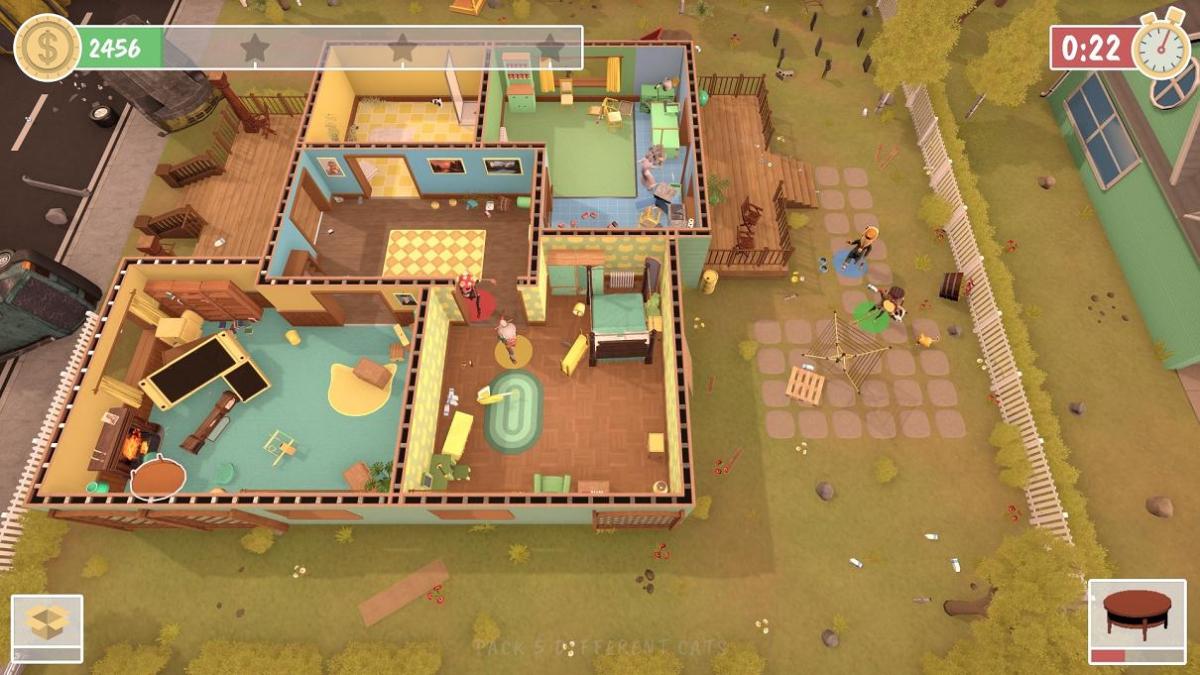 It’s been a while since we published a special on new indie releases, so today we’re checking out the former Stadia exclusive Get Packed which comes to consoles in a “Fully Loaded” version, an expansion for Radical Fish Games’ CrossCode entitled A New Home and the pixel platformer Castle of Pixel Skulls from 2Awesome Studio.

One of the few Stadia exclusives that launched last year, Get Packed is now available on consoles as well. Developed by Moonshine Studios and published by Coatsink, the new release is an expanded edition that features more content than the original release. We tested it on a PlayStation 4 Pro.

On the surface, Get Packed looks similar to games Moving Out and Overcooked – with an especially big resemblance to the former. Here, you’re a crew of guys helping people move their stuff out of their house and into a truck – which no doubt sounds familiar. Get Packed runs with this theme though, and the campaign quickly sees your team diverting their attention to other “moving jobs” like robbing banks and museums, and they even stick with their gig when they end up in prison.

As you’d expect, this is a game best enjoyed with others, and it supports both local and online multiplayer action. You can play solo and that works fairly well too, but we wouldn’t recommend it because of a short campaign that simply isn’t as fun when played without others. Things aren’t terribly challenging when playing with others either though, but there is a lot of replay value in the ability to just have fun with it all.

While breaking stuff was sometimes even an objective in Moving Out, here you get points deducted from your score. Causing mayhem is extremely fun though, and definitely better with others. One minute you’ll be cruising along and following the objective, but the next moment someone decides to break the rules and just run amok with the game’s mechanics, physics and animations. You can “accidentally” bump one of your teammates into traffic, for instance, or lock them inside the van that’s waiting to take your stuff away. Not terribly fun when playing solo, but absolutely hilarious when playing with others. If you enjoyed Moving Out but prefer something a little more chaotic, then Get Packed has you covered.

Almost three years after the base game, developer Radical Fish Games is back with a massive DLC campaign for CrossCode entitled A New Home, which promises to wrap up Lea’s story in the game. Out now for all platforms after an earlier release for the PC version, we couldn’t wait to dive in.

CrossCode has been a massive and beloved hit for the developer and publisher Deck13, and it’s clear to see that a lot of love went into A New Home. Its premise of a game within a game and all the intrigue within and surrounding that virtual world connected with players, but questions remained about the fate of Lea, who suffered from memory problems in the core story, which you need to complete before tackling A New Home.

At the start of the new chapter, which plays like a true sequel rather than the very affordable DLC package that it’s being sold as, Lea reconnects to the virtual game world, ready to look for answers, both for herself and for us as players. What follows is an engaging and emotional narrative, mixed with all the elements that made CrossCode so much fun to begin with – solid combat and well designed puzzles. Everything is treated with the same attention to detail that the base game received as well, so this DLC represents an amazing amount of value for money, with a campaign that clocks in at well over twelve hours worth of gameplay time – something even some full games struggle to achieve.

If you add all of the optional objectives, new NPC characters and locations to that, this is a must-have expansion to the game for fans. Its biggest fault is perhaps that is treads familiar territory a bit too much. Those who enjoyed the game won’t care though, because it’s an absolutely massive amount of “more of the same” but in this case that means more of one of the best indies in recent years.

Released years ago as a mobile title, Castle of Pixel Skulls has just received a console port, which we tried out on PlayStation but is also available for Xbox and the Nintendo Switch. Published by 2Awesome Studio, it’s a pixel platformer with retro aesthetics and some challenging platforming – a very familiar genre in the indie/budget scene in recent years.

Castle of Pixel Skulls doesn’t do much to make itself stand out from the crowd either, with rather formulaic gameplay and a lack of storyline or diverse gameplay mechanics. If anything, it stands out because it’s a little more accessible than similar games, with a difficulty level that should appeal to those who would normally quickly give up the later worlds in Super Meat Boy.

With 40 levels to tackle, it’s a shame that (apart from a visual change) the gameplay doesn’t evolve over the course of the game either. The last few levels aren’t necessarily more difficult than the ones you played early on, and you’re not using any new abilities that need mastering either. There’s sort of a built in leaderboard where you can try and set better times as well, but there is no reward system in place for doing so – so replay value is limited.

The game’s roots as a mobile title can be seen through its controls, which can feel imprecise and a bit floaty compared to some of the greats in the genre. The game is generally forgiving enough to compensate for this, but it also makes it less satisfying to complete a level or trophy objective. In regard to the latter – you’ll be done with the entire list within the hour (much less if you’re already an expert in the genre), so there’s a definitely appeal for trophy hunters there. For everyone else, it’s a rather formulaic take on a familiar genre that will entertain for the short duration of its campaign, but won’t leave a lasting impression.