Italian studio Antab has released their anticipated cyberpunk action adventure game Foreclosed, available now for PC, PlayStation, Xbox and the Nintendo Switch. We played it on a PlayStation 5.

In Foreclosed, you play as Evan Kapnos in a narrative that’s quite interesting and original as far as the cyberpunk genre goes. Your employer, Securtech, has suddenly gone out of business, and because this is a future where everything has a price tag your identity is suddenly foreclosed and up for grabs as well. You have to report to the courts to have your life reassigned, but before this happens a series of events thrusts you into an exciting narrative with all the usual cybernetic enhancements you’d expect from a game in the genre, staying true to certain tropes while remaining fresh with its narrative.

The audiovisual style of Foreclosed is a mix between XIII and Cyberpunk 2077 or Watchdogs, resulting in something that looks like a comic book adventure in one of the most stylish shooters we’ve played in recent years – partly because the developer has really embraced this comic book look and ran with it. The story is fully narrated as well, with Evan doing the narrating in a 50s noir “and then I walked into a seedy bar” style. It works well in giving the game a storytelling-like quality rarely seen in action games.

The in-game action sequences are mostly of the third person shooter variety, with a few scenes that play out from a different camera perspective – for instance to let you get a good enough overview to sneak around. As a cyberpunk game there’s plenty of room to upgrade your skill set with fun mechanics that include the ability to perform telekinesis to help you catch enemies off guard or create a distraction. 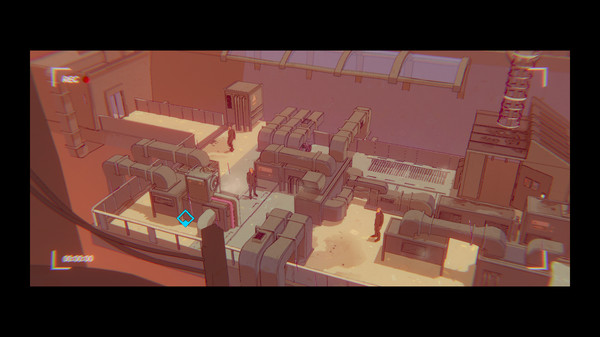 The action can get frantic, but Foreclosed generally isn’t as fast-paced as other shooters, nor does it want you to run and dash around a scene in an explosive firefight. Instead, your actions are more calculated, and you want to stay away from melee combat as you’re very vulnerable that way. If you’re coming into Foreclosed expecting an adrenaline rush of a shooter, you might be disappointed with its pacing.

Foreclosed is almost entirely linear in its campaign and doesn’t offer a lot of replay value, which is a shame because the campaign is relatively short. During that time, you’ll fall in love with its audiovisual style and will enjoy the narrative and various cybernetic enhancements, even if the gameplay itself isn’t as groundbreaking as the game’s looks. Well worth a playthrough though.