Developed by Blazing Griffin and published by Microids, Murder Mystery Machine is a game where we didn’t really know what to expect – despite its fairly obvious title. It was a bit of an odd one out in the Microids library, it looked like the excellent Disco Elysium in screenshots, and little was known about the gameplay. Color me curious. It’s out for consoles and PCs – we tested the PlayStation version.

On the surface of things, Murder Mystery Machine is a puzzle game where you try to solve murders by collecting and connecting various pieces of evidence. Deduction is the name of the game, and even when you’re fairly sure “who did it” you will still need to actually pin the deed on the person who did it as part of the District Crime Agency. You’re fresh out of the academy, so you have some things to prove, but before you know it your cases start to blend together in a larger (though somewhat far-fetched) plot – making this a game with a narrative not too unlike one of those straight to video police thrillers. I rather enjoyed having a larger storyline run through my cases – something that kept individual cases from feeling like just that.

You search crime scenes by looking for clues and talking to eye witnesses and others connected to the case, after which you can gather up what you have and see if there are connections to be made. Doing so successfully unlocks more avenues of deduction and research to pursue, until you’ve built a solid enough case. Depending on the order in which you uncover clues this might feel like a drag at time (when you go through the motion even though you’ve already cracked the case), but researching murders is mostly a rewarding process.

None of the cases/puzzles in Murder Mystery Machine stand out as especially innovative in nature, but everything blends together really well thanks to a satisfying game loop. Each case takes about an hour to complete, there are narrative sections that push the bigger plot along, and building a case always feels like an accomplishment. It’s a surprisingly lengthy game, but one that’s easy to breeze through with naturally built in moments where you can take a break and pick things up again the next day. If you love detective thrillers, check this one out.

Mickey Storm and the Cursed Mask

This one came out of nowhere for us, but Mickey Storm and the Cursed Mask from Lion Castle and Triangle Studios is out for all major consoles now and it’s a really fun solo/co-op platformer with a twist. We played it on a PlayStation 5, which is compatible with the PS4 version. 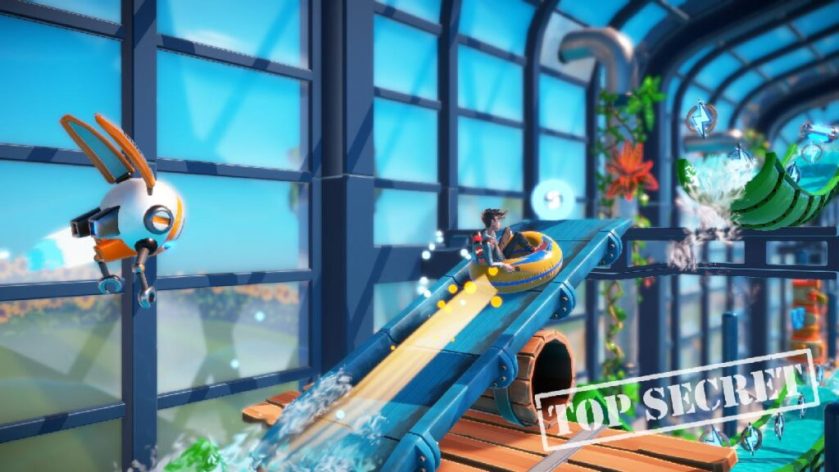 What makes Mickey Storm such a unique game is that your main method of traversal is…. water slides! The layout of a level typically consist of a series of short water slides that you can slide down (or, somewhat oddly, up) and although it’s often not mechanically different from sliding down a slope in other platformers, it’s a setting that immediately says “fun” when you see it.

Additional mechanics include the ability to do a double jump, to briefly glide in the air with a propeller and an attack. Combine and use them effectively, and you might pick up a few collectibles along the way as well, which encourages replay for those looking to complete their trophy collection. It’s not the most challenging of games, but some of these hidden secrets can be hard to obtain.

The fact that it’s not too difficult to play makes Mickey Storm and the Cursed Mask a great choice for family play as well, and what’s good news is that the game actually supports co-op play to make this possible. Playing together, you can claim everything on both parts of a branching path rather than having to replay a level solo. It’s also quite a forgiving experience, because if one player is having a rough time they’ll just get teleported ahead to where the other player is.

Besides a good way to play together, co-op is also a fast way to unlock additional content, which also includes extra outfits. This goes along well with the colorful and cheerful visual style of the game, with backdrops that all look and feel a bit like theme park areas to go with the “fun factor” that the game is clearly going for. And you’d almost forget it, but the game even has story campaign involving a super villain and his plot to kidnap your parents with the use of an enchanted mask. It’s rather silly and doesn’t affect the in-game much (besides boss fights), but Mickey Storm and the Cursed Mask is a pleasant surprise for those looking for a bit of family entertainment.

Gelly Break Deluxe was developed by ByteRockers, and if that sounds unfamiliar – they’re the studio behind games like VROG and the recently released BeeFense BeeMastered. And just like that last title, Gelly Break Deluxe is also an expanded re-release of an earlier game – in this case one that was a Switch exclusive a few years ago.

The game is a 3D platform that can be played solo but was designed with cooperative play in mind. Even in its single player mode you still control two characters (Gel and Lee) – only here they’re attached to one another for the majority of the game, just letting you switch between them to make use of their unique abilities. It’s more fun when playing with a friend though, as instead of a simple switch you’ll actually have to cooperate here.

This means giving each other a piggy-back ride of sorts, but you’ll still need to switch positions while doing so. Because your green character can only jump on green and your orange can only jump on orange, which one of you is on the bottom matters – as does good timing, because you need to initiate that switch at the same time for it to work.

Despite level designs that aren’t too tricky and some fairly forgiving mechanics, there’s a learning curve involved in getting the timing right, but once it clicks Gelly Break is a lot of fun playing together – with stressful moments and feelings of success alternating all the time. You’re not constantly cooperating either and can also split up and take different routes, which makes for nice breaks in gameplay style and even a bit of replay value as picking “the other character” means you get different routes to explore as well.

For a budget/indie platformer, Gelly Break Deluxe features a good length campaign that clocked in at about five hours for us, although the game does come up short when it comes to diversity in its content. Enemy types aren’t exactly plentiful, and the basic gameplay mechanics don’t really evolve after the first few levels that introduce them. Family-friendly co-op platformers are rare though, so we’re just lucky that we received two in this last week alone – Gelly Break Deluxe is the more challenging of the two, but both are fun and worth picking up.