More so than any other period of the year, the pre-holidays phase is a time where we see tons of annual releases. Few are a better bit for a time of family fun than Ubisoft’s Just Dance franchise though, which is now up to its Just Dance 2022 edition. We checked it out on a PlayStation 4, but you can also pick it up on Xbox, Nintendo Switch or Stadia.

It feels like Just Dance has been around forever at this point, but in reality the series only started in 2009, just over ten years ago. And while the early years were dominated by their use of technology like Kinect, the PlayStation Eye and Nintendo’s WiiMote, the formula has since shifted to modern consoles – though there was still a Wii version of Just Dance just two years ago.

Now less reliant on technology that not everyone has in their household, Just Dance has settled into a comfortable rhythm. If you have a camera and want to use it for tracking, then you can still do that. Want to wave a Move wand around? Go right ahead. They’re great tools and arguably make for the best kind of experience, but Just Dance’s inclusion of a bring your own device principle has been the change that really brought the game to a wide audience. You can simply download the dedicated app, and (as long as you hold on tight) your phone will track your dance movements thanks to its built-in gyroscope.

It’s a good example of how accessible this franchise has becomes, and the fact that phone tracking seems to be a tad more forgiving than the old motion controller/camera combo only helps in making even the most uncoordinated people feel like they’ve got swagger and a sense of rhythm. Not talking about anyone in particular. Fun is the core concept here, and Just Dance is best enjoyed with others – locally if possible, but you can engage with the online community as well.

The track list in Just Dance 2022 contains, as usual, a mix of today’s hits and timeless classics. But while plenty of players will enjoy dancing to current tracks by Billie Eilish and Lady Gaga, we always tend to be more drawn to the golden oldies, and Just Dance 2022 doesn’t disappoint. You can go way back with disco songs like You Make Me Feel (Mighty Real) by Sylvester or Smalltown Boy by Bronski Beat, but more modern hits like Gala’s Freed From Desire (which we desperately want in a singing game too) proved very popular here as well.

Other recent classics include Justin Timberlake’s Rock Your Body, Sia’s Chandelier, I’m Outta Love by Anastacia and Believer by Imagine Dragons, so there’s a terrific selection here that we feel overshadows the newer songs a little bit. We realize that’s partly down to personal taste though, which also applies to a pet peeve we’ve had with this series for years now. Some tracks, like ELO’s Mr Blue Sky, are performed in an “as made famous by” way – with vocal by (in this case) The Sunlight Shakers. They do a fine job covering the song, but it’s just not the same and we can’t help but wonder why the game can’t just have fully licensed and original songs. 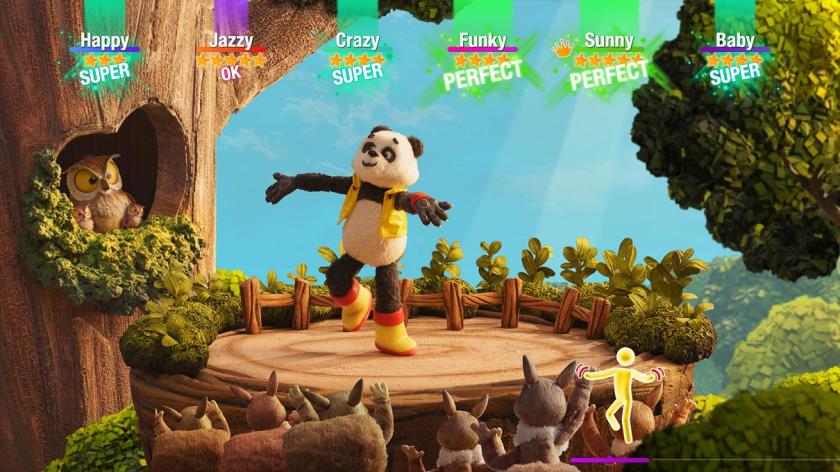 An area that’s seen some serious improvements is the way that dance routines are rendered on screen. What used to just be static dancefloors with neon-like dancers performing the moves for you now looks much more detailed, and in some songs the background are very dynamic and the dancer feels like part of a cartoon – the aforementioned Mr Blue Sky is a great example of this.

As with previous versions, you select difficulty levels, or go for Kids Mode, which makes routines a little simpler to perform and pushes you towards specially selected content as well. You can get even more content by subscribing to Just Dance Unlimited as well – an option you’ll be frequently confronted with and one you can sample with a free month before jumping in. It gets you hundreds of tracks to enjoy from pretty much the entire history of the franchise, so it’s at least worth trying out.

Our biggest problem, however, is that – as longtime followers – we already have the majority of these games in our library, but with the inconvenience that we’d have to install an old version of Just Dance to get to them. We suppose it’s a side effect of having both a disc-based and a digital model of the game, which makes importing a library difficulty – though we still hope this improves in the future.

In terms of features and modes, Just Dance 2022 doesn’t surprise. It does come with a great tracklist though, with some songs that are an absolute blast to play and some routines that are just plain fun to watch. And inclusion of Gala’s classic track has us hoping for a karaoke/dancing hybrid some day as well – what a blast that would be.