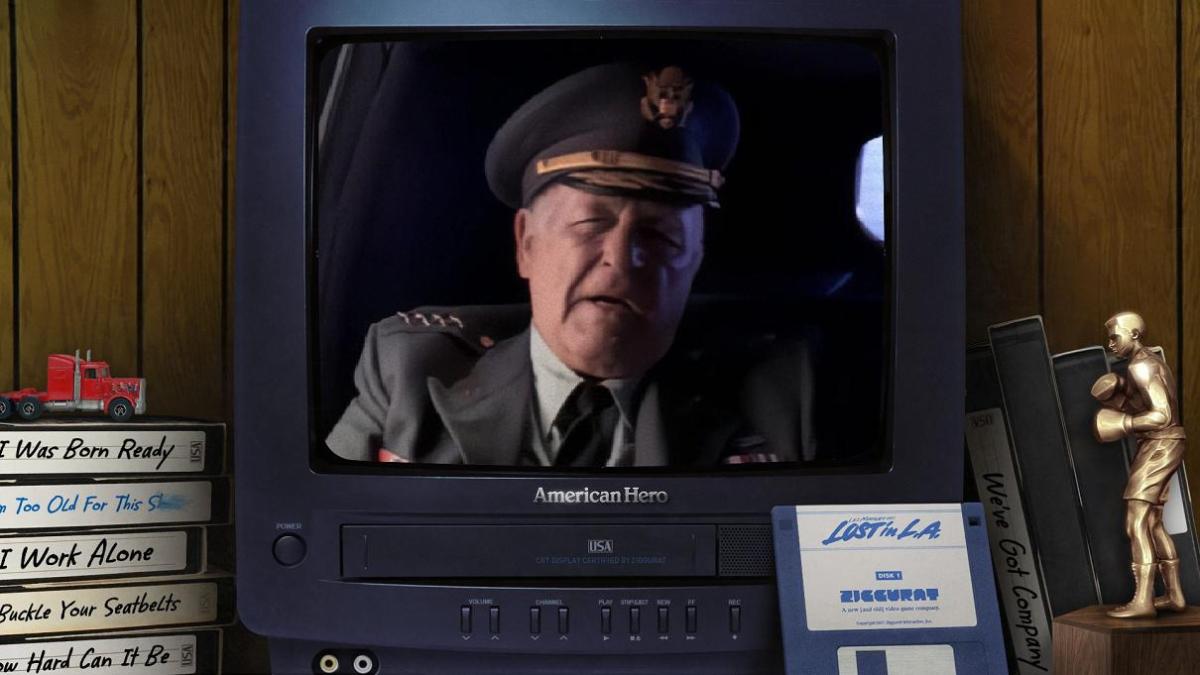 Ziggurat Interactive has been releasing a steady flow of classics for a while now, and one of their most eye-catching titles to date is American Hero, a throwback to that iconic first wave of FMV games that came out after CD-ROM technology became widely available. It’s out now for PCs and consoles, and we checked it out on a PlayStation 4.

American Hero was originally conceived (and almost completely developed) for the Atari Jaguar console, with its CD attachment. You may even have seen footage of pre-release builds of the Jaguar version pop up online, but with the required hardware being such a rarity this is the first time the game is in reach of a wider audience – and developer Empty Clip Studios finished the game as well, as development on the Jaguar version was dropped with the finish line in sight.

As a result, the footage used here is all vintage 90s stuff – a little grainy, poorly lit, and backed up by a few newer voice recordings that help fill in the gaps. We think that was absolutely the right way to go too, because nostalgia is a big driving force for American Hero – which isn’t the kind of polished, HD production you get from the likes of Wales Interactive these days. It doesn’t need to be either, because this is one of those cheesy action movies that wouldn’t fit in today’s day and age anyway.

To illustrate this, the story starts in a strip club, where we meet former military intelligence officer Jack Devon, who then finds out that his ex is involved in a strange scheme that involves a mind control virus of some sort. What follows then is a crazy collection of scenes that involves car chases, fights, explosions, over the top dialogue and hammy acting. And all of that wraps up within the hour too, as American Hero sits somewhere in between a TV show episode and a feature length film in terms of its runtime.

The game does feature a few modern conveniences that were rare during the FMV push of the 90s though. While a lot of games would use video footage as cutscenes in between sequences where you investigate a largely static scene, American Hero keeps the pace up – just games like The Complex and Night Watch do. Scenes end by giving you two or more choices for Jack, and even if you don’t choose anything the action will keep rolling along.

Choices matter too, but not in the sense of a narrative that branches out heavily. Instead, the wrong choice often leads to immediate death – often of the explosive kind, leading to a sudden end of your adventure and a quick reload. Other choices are more subtle and determine if you’re on the “good cop” or “bad cop” end of the spectrum, which can give you different choices later on in the game. It’s not very well geared towards multiple replays though, and doing so will result in re-watching a ton of unskippable videos before you get to something new.

Because American Hero was originally shot in a 4:3 format, you see everything play out on an old CRT monitor. It’s a clever way of adding some more retro flair to the experience while avoiding the use of standard borders, and it also keeps the video size a bit smaller – hiding the lower video resolution somewhat. The UI elements of the game also get pushed into this small viewing window though, which feels unnecessary and we can imagine it makes things hard to read on the Nintendo Switch, for which the game was also released.

American Hero clearly shows its age, but in its clunky nature, its B-movie script and some B-movie acting (especially from the supporting cast) there’s a strong sense of nostalgia as well. If you enjoyed some classic straight to video action movies back in the day, then this one’s for you. It’s relatively short, but the price tag reflects that and it’s undeniably a piece of pop culture history.