Pippin Games launched Wife Quest on Steam last year, and while we initially thought this was going to be either an adventure or RPG title it’s actually a side-scrolling platformer of the retro variety. In it, you’re Mia, the wife who has to save her husband Fernando from the clutches of a Dark Elf called Morganna. Eastasiasoft has now brought the game to consoles, where we played it on a PlayStation 4.

The premise and story in Wife Quest are very tongue in cheek, and where many fantasy adventure games try hard to go with a serious undertone this one knows it’s just silly – turning the man in the situation into a helpless victim while tons little monster girls all want him, as he’s seemingly the only man around. Mia’s the warrior and hero, and her abilities gradually grow as you unlock new skills as a reward for beating a level – which in turn grants you access to new parts of the map. 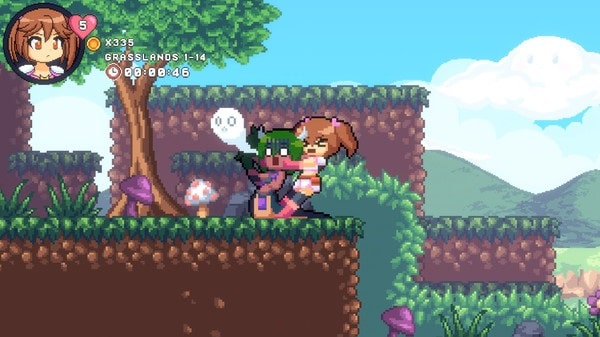 What’s humorous is that Fernando doesn’t really seem to mind being kidnapped, although Mia fiercely goes to battle for him. There are a lot of little visual jokes that show him relaxing while his wife fights for him – once again showing us that Mia is the fighter of the two, and this is her quest. She oozes personality, and is not afraid to show it through insults during boss fights or in-game as her portrait changes to reflect her current state of mind.

At first glance, Wife Quest looks quite generic and simple with its pixel art visuals and similar looking enemies, but it’s a surprisingly well designed game with nicely crafted levels and interesting boss fights that offer just the right amount of challenge and diversity, even in the those enemies who might look the same but can act very differently. And this game, like its protagonist, is no pushover either. Eastasiasoft may release plenty of games with easy platinums, but Wife Quest makes you work hard for it for about a dozen hours – a great deal considering the game’s price point. Don’t be fooled by the slightly generic exterior, this is an excellent action platformer and an absolute steal.