Lumote: The Mastermote Chronicles, from developer Luminawesome Games and publisher Wired Productions, is out now for all major systems – here are our thoughts on the PlayStation version.

From Aquanox to Aquaria, there’s always been an allure to exploring the deep seas inside a videogame. Lumote: the Mastermote Chronicles adds a splash of ‘alien planet’-like mystery and wonder to this as well, with its bioluminescent environments and color-rich puzzles. It’s a 3D platformer as well, which helps to bring these environments to life as you gaze upon them from all angles.

The titular Lumote is a small squid/frog-like protagonist who’s looking to descend even further into the depths in order to become the “Mastermote”, taking control of the environment by turning it from red to blue. You get a pretty good scope of the work ahead of you by gazing down into the depths with the help of the camera, where you can see additional layers of red descending deep into the darkness of the oceans. Or, looking up, layers of blue that tell you how far you’ve come already. 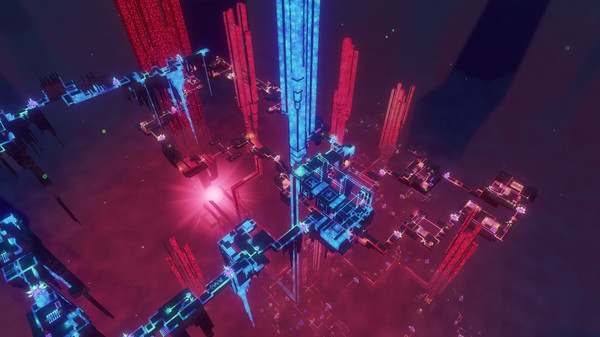 Despite little Lumote’s ambitions, this is far from a narrative-driven adventure, and the focus is firmly on the game’s puzzle-based gameplay at first. The earlier levels are designed to familiarize players with the core puzzle mechanics, which usually involve moving around and manipulating level elements in order to change things to the right color. Elements will include all-important electrically charged creatures that provide power, jellyfish that help you get to higher places and anemonies that repel objects with a color that doesn’t match.

It may sound overwhelming on paper, but underneath the use of organic elements as puzzle parts Lumote is an easy to grasp yet hard to master brainteaser. One that gradually introduces ever more complex ways of combining its mechanics – which eventually also makes the platforming aspects more important as you’ll need to traverse more moving parts while avoiding a fall or possible crushing incident.

That moment is also where Lumote: The Mastermote Chronicles becomes a tad too unforgiving for its own good, as unexpected and unintentional “deaths” can set you back quite a bit, resetting all of your progress in a section rather than just respawning to right before it happened. When focusing on a puzzle and making good progress, that kind of thing can feel like unnecessary padding and lead to mild frustration. This is especially true because the controls aren’t tight and responsive enough for the trickier bits in the game, which become more plentiful the further you progress.

Lumote: The Mastermote Chronicles is at its best when it’s a puzzle platformer that you can enjoy without some of the rougher edges getting in the way. The gameplay structure which essentially sees you descending a massive tower is a nice (visual) touch, though apart from a more crowded look there isn’t enough to set the upper parts apart from what you encounter below. It’s visually appealing though, and puzzle platforming fans will enjoy it if they persevere.