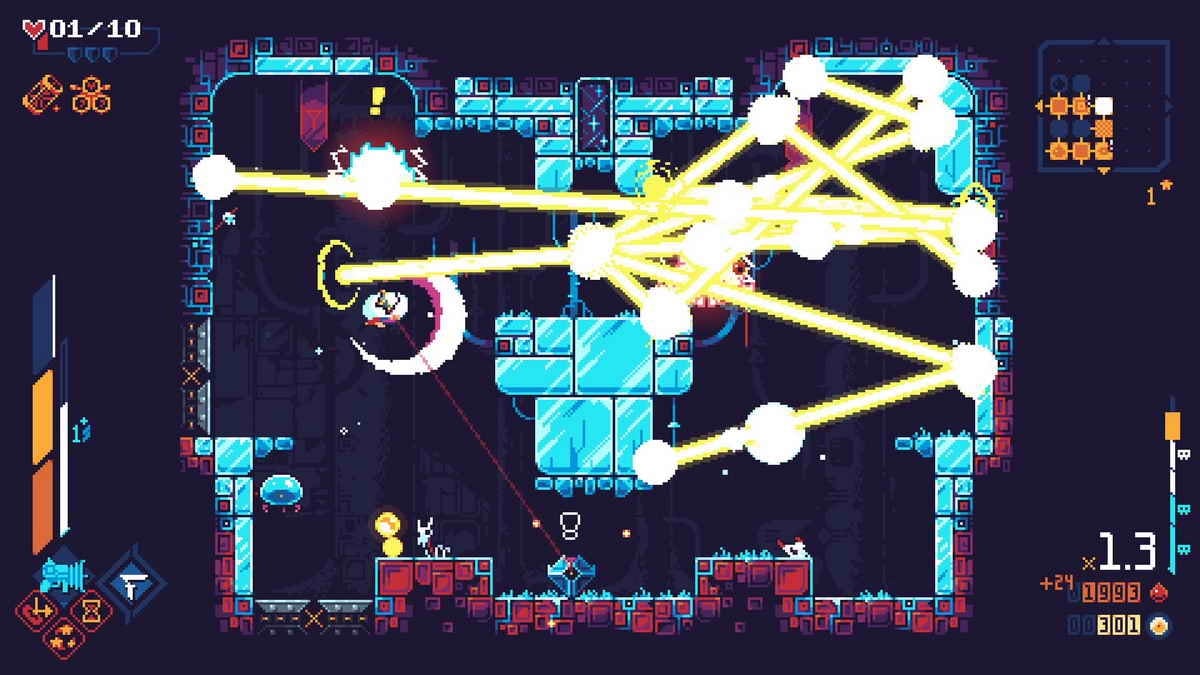 Most gamers don’t have every single system out there available to them, so it’s nice when games spread their wings and appear on new platforms. Here are three that just made the leap, with ScourgeBringer for the PlayStation 5 and Hidden Shapes: Animals & Lovely Cats, Wild West Crops and Flower Shop – Summer in Fairbrook for the PlayStation 4.

You may remember our earlier coverage of Scourgebringer when it launched for the PlayStation Vita during last few months of Sony’s handheld, just before Sony closed the doors for new (digital) game launches on the platform. Now, developer Flying Oak Games and publisher Dear Villagers are bringing the game to PlayStation 5 owners as well, an update which is free to claim for those who previously bought it on the PS4.

On the big screen, ScourgeBringer is the same game we reviewed back in 2021 on the Vita, but the game does benefit from better controls when using a DualSense controller. It may be partly personal preference, but using larger thumbsticks and buttons gives the game a more responsive feel – something that’s especially useful when facing off with the game’s bosses. 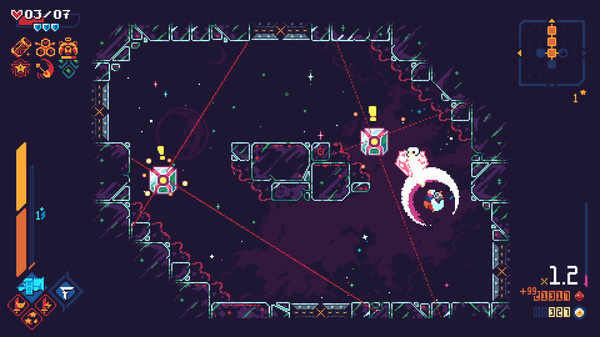 Visually, things haven’t changed much, as you’d expect with a pixel art platformer – though the game now supports 4K resolutions that are a definite step up from the Vita visuals (as seen on a big screen TV by using a PlayStation TV unit). You don’t get an upgrade to the PS5 version with the Vita one, but if you don’t have access to a PSTV unit then this is a great roguelite platformer you’ll want to add to your library.

Hidden Shapes: Animals and Lovely Cats is a compilation of two small casual puzzle games that were originally released by developer YAW Studios on Steam. Now, with the help of indie publisher QUByte Interactive, it’s finding a new home on all major consoles – we checked out the PlayStation 4 version.

As puzzle games go, few have a more leisurely feel to them than this one. That’s true for the gameplay, but here’s a minimalist feel to the visuals as well, with most puzzles consisting of pictures made up of white lines on a black background, with occasional splashes of color or a few colored backdrop effects in the “harder” mode. It looks nice and clear though, a bit like those magical scratch pads for kids. 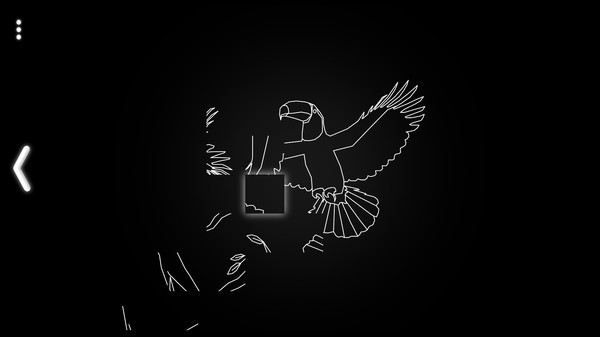 Gameplay-wise, each picture is ‘cut up’ into squares that you can rotate into the correct position, and solving each puzzle is a simple case of lining up all the pieces of the puzzle so that they align and form a complete picture again. Once you get a few pieces rotated the right way, just tracing the exciting/correct lines is often enough to get through a puzzle – it’s a simple concept that can also be enjoyed by kids, and it includes a hint system if you happen to get stuck anyway.

Puzzle game purists might not find a lot to enjoy here, but Hidden Shapes: Animals and Lovely Cats is a very relaxing and casual experience than can also draw in very young gamers or even grandparents with little affinity for videogames. An easy to obtain trophy list won’t hurt for some gamers either.

Wild West Crops is the latest collaboration between Ratalaika Games and developer lightUP, whose work you may have previously seen in games like Milo’s Quest, Super Box Land Demake and Mina & Michi. Wild West Crops originally launched on Steam last year, and features a similar aesthetic to some of the developer’s previous games.

This is a wild west take on the metroidvania genre though, in which a cat (“El Gatito”) is our protagonist. In an even weirder touch, your opponents are mutated crops – think “Killer Tomatoes meets classic western” in a place called Meowtown. The gameplay itself is a metroidvania-style platformer where you have two attacks available to you – a gun and the ability to throw grenades. 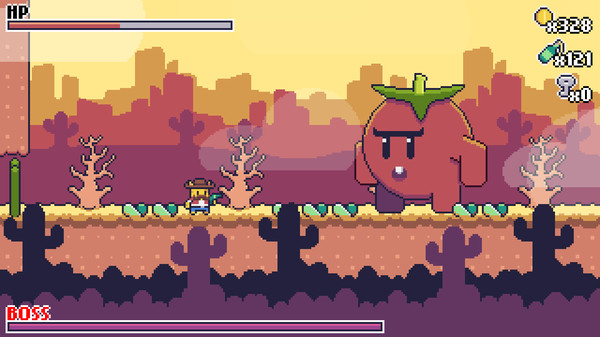 Over time, you can upgrade both your character stats (health) and your weapons with the coins you find, but the most important progression mechanics are the keys and switches you need in order to access new areas. For a metroidvania it’s quite forgiving with its save/respawn points though, so expect to power through the game at a brisk pace – something we can also say about the included trophy list, which isn’t hard to complete.

If you’ve played and enjoyed other lightUP games, you’ll probably like Wild West Crops as well. It’s a nice simple take on a familiar genre with a cheerful art style with mechanics that are straightforward. You’ll complete it within an evening, but it has a price tag to match.

This one certainly has had a long history already, because before Ratalaika brought Flower Shop – Summer in Fairbrook to consoles it was released by developer Winter Wolves for mobile devices way back in 2013. That’s when phones were running Android version 2.0 and 3.0, to give you an idea. It has an interesting mix of dating and farming mechanics though, so it’s well worth a look. 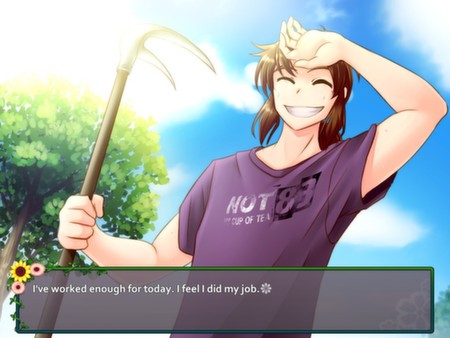 In Flower Shop, your college career isn’t going so well, and neither is your relationship with your girlfriend. You’re sent to Fairbrook for the summer to work the farm there, while meeting new friends and managing your relationships at the same time. While the latter plays out in a visual novel-type style through choices, you can also keep a calendar to help you divide your time between your work at the farm and four different love interests, one of which is your college girlfriend.

The farming gameplay is somewhat rudimentary, but it does add diversity to the gameplay, which through your choices offers nine different endings. We certainly found Flower Shop – Summer in Fairbrook more interesting than the typical choice-driven visual novel, with the ability to farm and sell crops providing nice breaks, and the calendar option letting you balance things out according to your own preference. If you want no farming at all or aren’t interested in a particular love interest, you can play it that way too. It won’t please farming game enthusiasts or die hard visual novel fans, but it’s a nice diversion for those who didn’t play it on mobile yet.