With the Coiled Captors expansion for Tiny Tina’s Wonderlands and Lost Valley for Solasta: Crown of the Magister, we’re checking out two new DLC releases today. We’re also taking a look at NeonLore, a creative take on the cyberpunk genre.

It’s only been a few weeks since we reviewed Tiny Tina’s Wonderlands, an excellent new tale on the Borderlands formula that sprung from an iconic DLC release in the franchise. The first DLC for the game is already upon us and is dubbed “Coiled Captors” – an expansion that’s included in the game’s season pass but can also be bought separately. So what do you get with an expansion for a game that was born out of an expansion? We fired it up on a PS5 to find out.

The story premise for Coiled Captors sees you venture through the mirror of mystery and face off against the Coiled, who have captured an Old God named Chums. It’s the kind of fantasy setup that fits well with Tiny Tina’s take on the looter shooter, and it includes plenty of new loot as well an impressive new boss. It’s one who will change form over time, so if you play again in a week you’ll see another version of the boss fight – which is great for replay value. 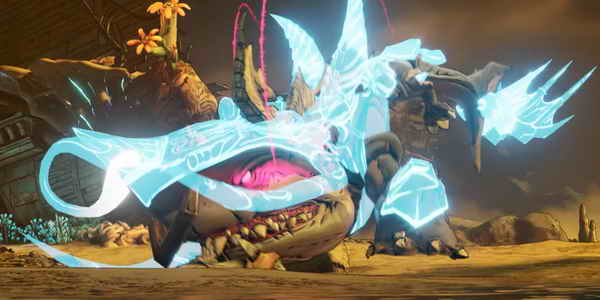 We’re using the term “story” lightly above though, as Coiled Captors is – especially for a game in the Borderlands franchise – rather low on new content. Ironically, the original Tiny Tina release (Tiny Tina’s Assault on Dragon Keep, back in 2012) set a high bar with a refreshing take on an established franchise, but Coiled Captors doesn’t do the same. Despite a narrative setup, there is barely any story here, and to drive that point home the DLC doesn’t include any new quests for you to complete. Instead, you fight your way through a handful of waves of enemies before facing off against Chums, and that’s about it. It’s fun, but it’s more of the same, and not that much more. Perhaps our expectations were too high for a piece of DLC that was released so soon after the main game, but we except much better content to come out for Wonderlands in the coming months.

Another DLC release that popped up on our release roster, Lost Valley is a new expansion for Solasa: Crown of the Magister. Price-wise, it’s just a fraction more than the DLC for Tiny Tina’s Wonderlands that we just reviewed, but this one offer a wealth of content.

Lost Valley includes a brand new non-linear story campaign that takes place in The Dominion, which is a volatile region ruled by a tyrant. In addition to a new story campaign, the expansion also adds brand new enemies to fight as well as new subclasses, which builds on the existing system of classes and subclasses that was already available in the game. Two of the new subclasses require the Primal Calling expansion we checked out earlier though, so be aware of that when you dive in.

For those who enjoy getting creative, the new expansion also adds functionality to the game’s dungeon maker, with better support for quests, dialogs and scripting. You can also use the new enemy types in your own creations, so Lost Valley comes with a huge amount of content for Solasta players to enjoy. Well worth the price of admission, although we wish there was some kind of season pass construction as well – so players could see what else is coming and you don’t have issues with content from one add-on depending on another add-on being bought.

One of the best things about the indie scene is that it sometimes gives us gaming concepts that are quite different from the norm – even experimental in nature. Take Playstige Interactive’s NeonLore, which on the surface looks like a rather good looking indie developer’s take on the whole cyberpunk trend, but plays quite differently.

When we say it’s rather good looking, we’re understating. In-game terminals and character models may look a bit cheap, but the environments are beautifully done, and with walking simulator-like gameplay there’s plenty of time to enjoy all the subtle details as well. NeonLore doesn’t play like any of the other cyberpunk-themed games we’ve played in recent years though, and is actually quite low on traditional gameplay bar a few puzzles here and there.

We tried to classify NeonLore as “interactive fiction”, but the lack of gameplay and objectives made that not feel quite right. Ultimately, we settled on “immersive fiction” instead, as NeonLore wants to tell players four short stories by immersing them in the environment in which it takes place – a storytelling mechanic where your surroundings and other characters are more important than your own actions.

It works as an experimental concept, though the ‘freeform’ storytelling didn’t grab us in the same way that a more linear story would have – as is often the case in traditional walking simulators. What didn’t help is that the flow of the experience was too often interrupted by a trophy popping for something we did – although trophy hunters might disagree with us on that front. We thought it hurt the literary approach of the game a bit, but still came away thinking we had just played something a bit different from all the other cyberpunk stuff and something we’ll remember for that, and for its budget asking price that’s not a bad deal.