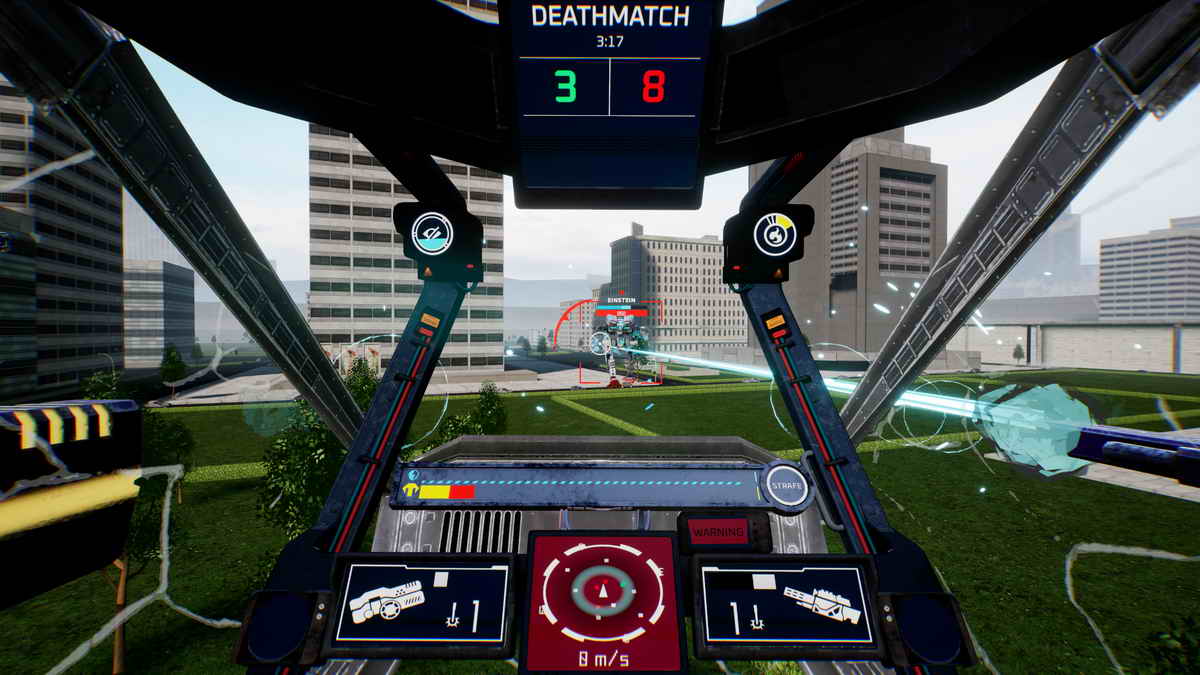 It’s all about VR headsets this time, as we’re taking a look at three new releases that are exclusive for VR. Here are World of Mechs, First Person Tennis – The Real Tennis Simulator and Cosmonious High.

With its unrivaled ability to deliver a sense of scale, you’d think that mech combat would have been a far more popular genre for VR developers than it’s been. Rebellion did something similar with tanks in Battlezone and of course there was RIGS, but both of those were early PSVR titles and it’s been fairly quiet in recent years. Enter World of Mechs from Studio 369, which is out now for the Quest 2 headset.

While games like MechWarrior take a relatively complex approach to mech combat, World of Mech is happy to stick with an easy to grasp and jump into type of arcade gameplay – probably a smart choice for a VR game where gameplay sessions are typically shorter and campaigns are rarely longer than a handful of hours. That’s definitely true here as well, with a short and basic tutorial that teaches you how to use you guns and missiles and how to move around, and then a campaign that’s twenty missions long. While that’s a decent number, the arcade-oriented nature of the gameplay and relatively small maps makes them on the short side. Again, not a problem for a VR game.

What’s a shame about the campaign, however, is that those twenty missions don’t feature twenty unique maps to play on. There are only a handful of them, so they get recycled rather quickly – tolerable during a single campaign playthrough but certainly less inviting towards a possible second playthrough. You earn unlockables by playing and there’s a good roster of 32 mechs and weapon choices to access that way, but we doubt many will keep jumping into the campaign to do so – the upgrade system is rather basic compared to something like MechWarrior.

Instead, it’s more fun to go online and play a few rounds of multiplayer mayhem, though World of Mechs looks like it faces the same problem that nearly all VR games face thus far – a player base that’s not big enough to easily get into (full) games with others. While it’s fun when it works, it’s worrisome that, so soon after its release, it often didn’t. Unless you have friends that you regularly play VR with, this is something to be aware of.

World of Mechs also feels bare-bones at the moment, although the developer has expressed wanting to expand the game over the coming months. This isn’t an AppLab or Early Access title though, so hopefully the player base will realize this and stick with it. We also hope that, over time, they’ll improve the visuals for the game a bit. This is a Quest 2 exclusive, but doesn’t feel like a game that couldn’t have run on the original Quest either. The mechs generally look okay, but the environments are empty and low on detail. It’s a very interesting game because the concept certainly works in VR, but it’s also rough around the edges.

First Person Tennis originally launched for PC-based headsets, but was recently ported over to the Quest 2 headset by developer Mikori Games – which seems like a great choice for a game of this type. After all, one of the go-to titles on the Quest is the Eleven Table Tennis, and “full sized” tennis seems like a great and more accessible sport to tackle in VR – as long as the movement factor is handled correctly, of course. 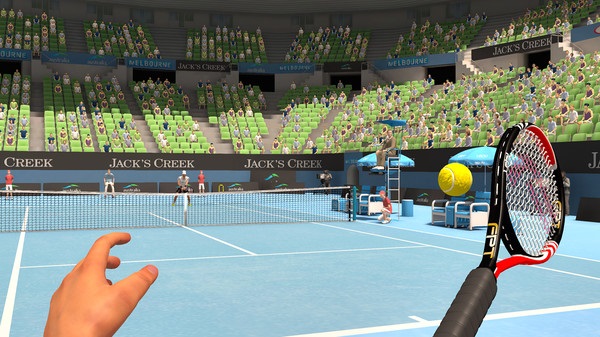 The game has a limited amount of gameplay modes, but does include practice modes that are useful for getting comfortable with the control methods that are on offer. Movement’s an important factor to consider of course, as very few people will have a tennis court-sized room to play in where they can run back and forth and play a roomscale version of the game. Instead, you can choose to teleport yourself – which we found awkward but maybe that’s just because we generally don’t enjoy teleportation as a movement option. Our go-to alternative was an auto-run option, which moves your players automatically and lets you focus on your tennis strokes. You can also run in place if you want more of an exercise, but it doesn’t add too much to the immersion – as does thumbstick control. When you get pretty decent, you can change the ball physics from arcade to simulation as well, which is a nice touch.

As with Eleven Table Tennis, this isn’t the prettiest game out there (especially when compared to some of the licensed tennis games out there), but the physics and gameplay are on point and that’s what matters most in a game like this. The audio, both in terms of sound effects and music, is equally basic in nature, so this is a game you’ll want to play for the experience rather than the visuals. 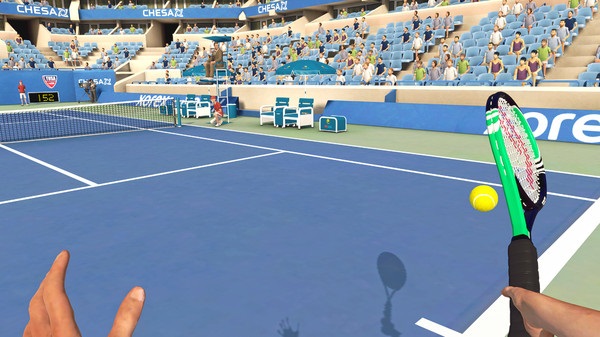 What helps the game, besides its solid physics model and wide array of control options, is multiplatform VR support. The AI performs quite well and is fun to play against in both practice games and matches, but it’s very nice that there’s an established and loyal (PC-based) player base that you can play against as well. For us, as tennis fans, this is a game we’ll be keeping installed on our Quest for a good while to come.

Cosmonious High gets an Accessibility Update

We often hear VR being regarded as an enthusiast hobby, so when we heard that developer Owlchemy Labs was releasing an Accessibility Update for the recently released Cosmonious High it certainly brought a smile to our faces. We thought we’d cover the news as well, because their work does a good job of outlining what it might mean to make a VR title more accessible.

Cosmonious High can now be played with just a single controller for players who are impaired in that sense. Another tweak is that when a player has to sit down, the game will automatically adapt its viewing angle and position so that the game world keeps everything at the right height. Both of these changes are physical in nature, and while they can be seen as “accessibility” options they also make the experience more comfortable for existing players dealing with things like fatigue. 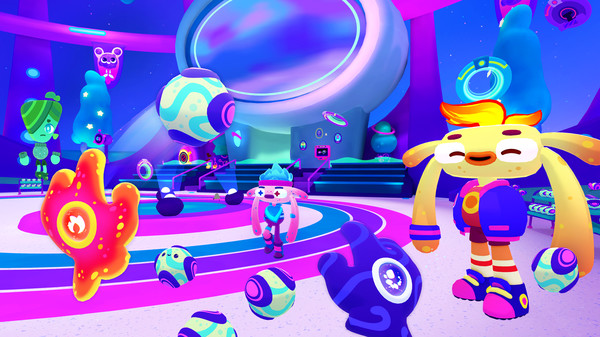 Other improvements were made to the game’s visual presentation, making it easier to spot objects that you can interact with through color changes and visual effects. You’ll also notice pop-up icons with instructions to help you along, as well as dynamic tutorials that help you when the game notices you could use a bit of a nudge in the right direction or aren’t using some of the game’s mechanics (anymore).

All of the changes made feel incredibly thoughtful, which we can attest to because we’ve tried to introduce VR to people outside of the core target group many times, and have often seen them run into issues that these tweaks address. Well done, Owlchemy.