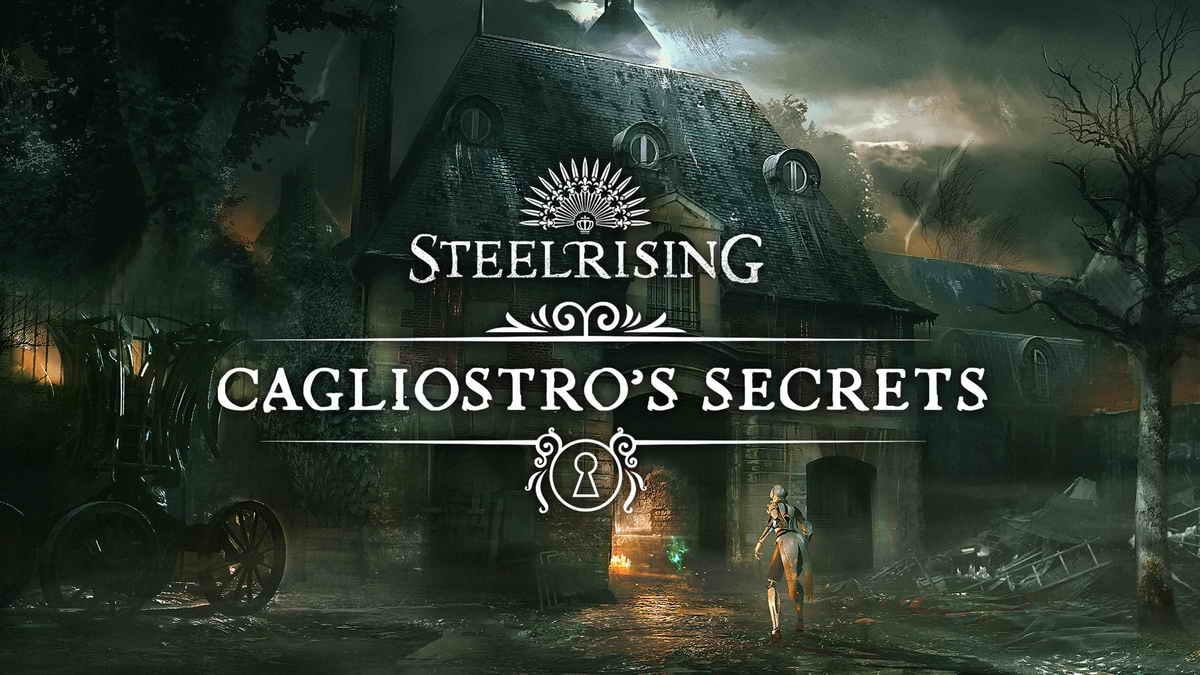 We’re kicking off the week with a look at four recently released addon packs for games we previously reviewed. Here’s a look at new content for Steelrising, GigaBash, Tropico 6 and Arcade Paradise.

We enjoyed Spiders’ Steelrising when it launched earlier this year, so we were happy to return to it a few months after our review by checking out its first story DLC, Cagliostro’s Secrets. Offering a two hour story to expand the core experience, we played it on a PlayStation 5.

Cagliostro’s Secrets is set in and around the Hopital Saint Louis and as such features new locations to explore, but even though you’ll also run into some new enemy types (including a boss Titan) it doesn’t add anything substantial to the central story. There’s no post-game revelation and no interesting new insight from another perspective on what you’re experienced already, so if you play this new content as part of your initial playthrough it might feel like typical (lengthy) side mission. 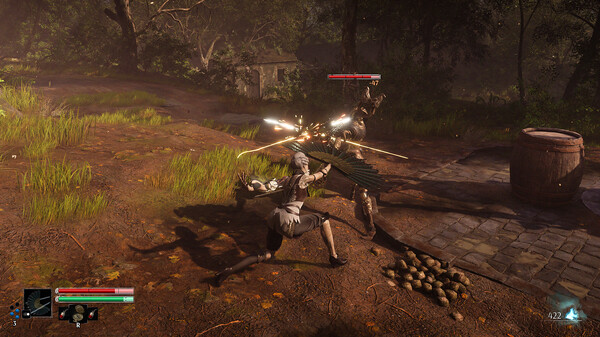 If you enjoy trying out different options in combat, then the new DLC features a few new weapons to find, and if you want more Steelrising lore you can find that as well, making exploration worth the effort. Combat gets an additional layer as well, as the enemy sometimes has a ‘medic’ type unit who can heal fallen robots – giving a tactical layer to the combat. The final boss fight is interesting too, as it’ll try to obscure your vision, making you extra vulnerable for a while.

Cagliostro’s Secrets is a solid addon from a gameplay mechanics perspective, but with the excellent work that the developer put into the main story we had hoped for a more impactful new chapter from a narrative point of view.

GigaBash gets a Kaiju Pack DLC

A few months ago we were suddenly seeing a lot of Godzilla/Kaiju-inspired games pop up, and GigaBash was one of the games we really enjoyed. And while we referenced that the game features “Godzilla-like characters” in our review, brand new DLC now lets you add the original super-monster to the roster as well, with a character expansion that’s available for PlayStation and PC.

Included isn’t just Godzilla himself, but also Mechagodzilla, Gigan and Destoroyah, the latter two of which might be less known to mainstream movie watchers but as firm favorites among Godzilla fans. Each character also comes with character-specific movesets and special attacks, allowing you to recreate battles and scenes from the source material – including Godzilla’s heat ray. 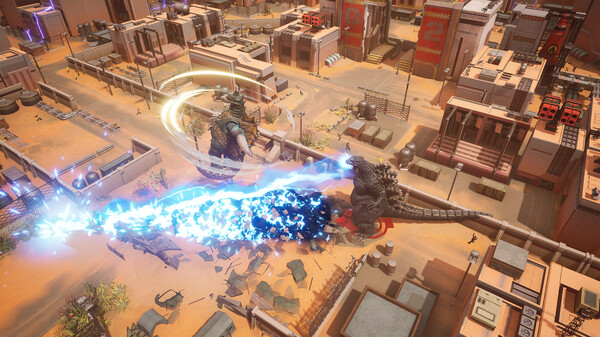 Also released alongside the new content is a new update that’s out for all players, even those who don’t have the DLC yet. This update includes a few new gameplay modes, including a wave-based Onslaught mode and an arcade mode that serves as a single player take on the game. The developers have also expanded the online functionality of the game, giving us several reasons to give this one another look.

Over three and a half years since its initial release, Tropico 6 is still getting new DLC content! New Frontiers was recently released, so we dove back in to see what developer Realmforge and Kalypso had added this time. It turns out El Presidente is heading into space!

Introducing new building units like the Space Port Complex, your goal will be to embark upon a journey into space – of course beating other nations to it in the process. This means investing in research, building rockets and eventually launching your first manned mission to the moon – followed by your ultimate push towards a colony on Mars – your goal in the new “Mission Mars” campaign. The campaign’s built up out of five individual missions, giving you plenty of gameplay for the price of admission. 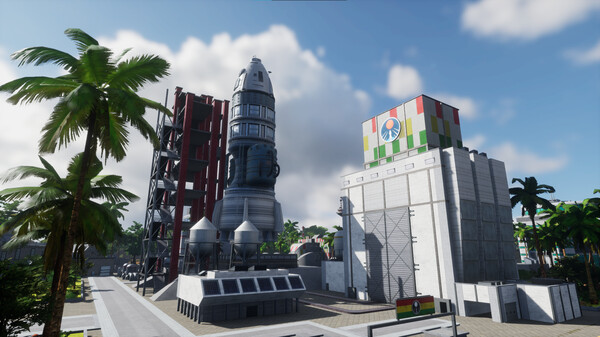 With new cosmetic upgrades, buildings and edicts, there’s plenty to play around with – our favorite being the option to commercialize your deep space endeavors by launching your very own “Space Soap Opera”. It has that typical Tropico flair of running a serious empire but with plenty of humor infused into it – longtime fans will have an easy time getting invested in New Frontiers for this reason.

Those same fans will also notice a lack of polish though, because even though there was quite a bit of time between this DLC and the previous one it turns out that New Frontiers launched with a few gameplay bugs left intact. None of them affect the game visually or result in hard crashes, but we did run into a few instances where mission objectives couldn’t be completed and we had to reload a prior savegame to fix things. So while this one’s fun, check the post-launch patchnotes to make sure this received the fixes needed to enjoy El Presidente’s interstellar ambitions to the fullest.

When Arcade Paradise launched this summer, we enjoyed its rather unique blend of management/sim gameplay and classic arcade gaming action. Now, developer Nosebleed Interactive has added three additional arcade cabinets to the game in the shape of Coin-Op Pack 1 – hinting at more expansions coming from them and publisher Wired Productions in the future. We took a closer look at what’s in the first pack.

And while these three new games can be bought as a pack, they can also be purchased individually – though you (roughly speaking) get the third one for free if you go with the pack. Included are three new games called Empathy, Smoke ’em and CyberDance Euromix – the latter of which is a new take on a game that was already in Arcade Paradise but with a new soundtrack. They’re familiar songs from the core soundtrack though, so if you didn’t like CyberDance (a DDR clone) then this one probably won’t sway you either, despite its higher energy songs. 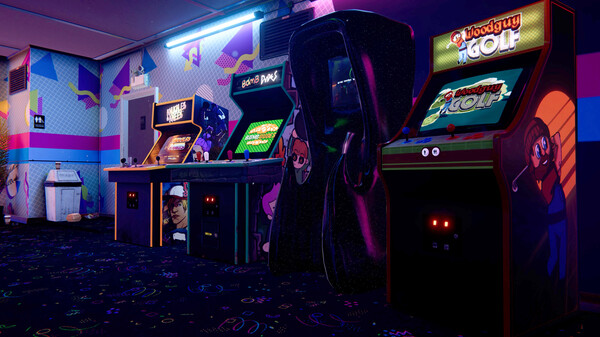 Empathy, however, is quite original and interesting in its concept – both visually and gameplay-wise. The cabinet itself looks intriguing with its minimalist controllers (just two handles to hold), and translates that to a game in which you use those handles to climb up a mountain – all the while being pestered by NPCs who want you to fail. It’s strange, but at the same time it’s hard to put it down and not go for another attempt.

Smoke ’em is the last game in the pack, and we were excited to play a light gun type of game – one of our favorite real-life arcade genres. This one’s rather basic in its setup though, acting more like a digital shooting gallery where you shoot targets that pop up than a classic light gun experience like Operation Wolf. At its low price point it’s hard to ignore the first Coin-Op Pack since Arcade Paradise itself is so excellent, but in a larger pack it would have been easier to ignore that two of the games likely won’t rank among your personal top 10 – unless you’re really into DDR.