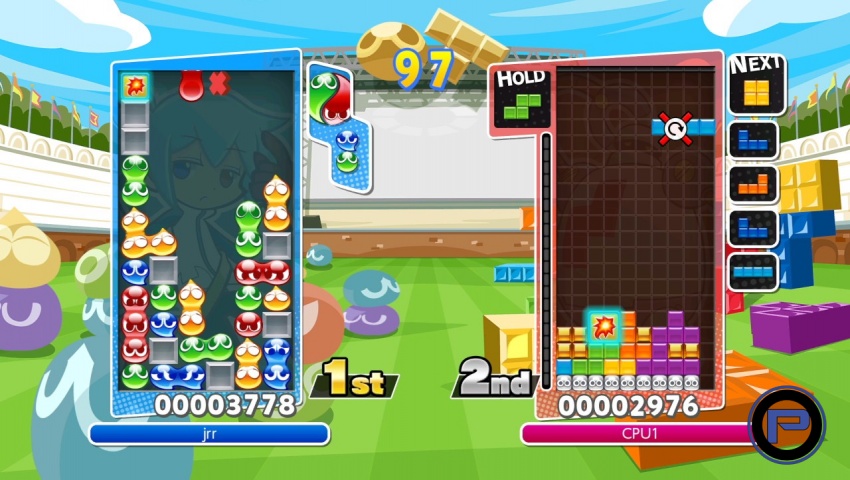 Puyo Puyo Tetris delivers a wonderful mash-up between two puzzle classics that is guaranteed to entertain through a large variety of game modes. We looked at the PS4 version.

Tetris is arguably the most famous puzzle videogame ever made. It’s appeared on nearly every system capable of playing games since the late eighties and it’s earned its place in pop culture history as well – even without the context of the game, Tetris shapes are recognized instantly. Puyo Puyo isn’t nearly as recognizable, but I’ve always seen it as a blend of Tetris and Columns – offering the color schemes of Columns with the ability to rotate blocks as in Tetris.

Now, these games come together in Puyo Puyo Tetris – available for Xbox One, PS4 and the Nintendo Switch. Perhaps surprisingly, the game has also been released in a physical version – a great show of support by Sega and Deep Silver for this game, and well deserved. Where a lot of puzzle titles go the ‘digital download only’ route, Puyo Puyo Tetris is so full of content that we’re happy to see it on store shelves – even if it’s priced at about half the price point of other titles. 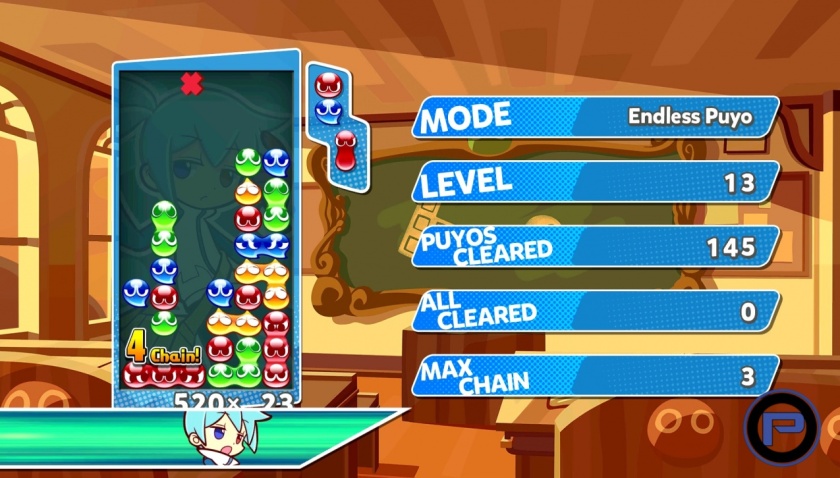 Besides the mashup of Tetris and Puyo Puyo, you can also play regular games of the original titles. This is obviously a great way to dust off those Tetris skills, but it it’s an even better first step when it comes to Puyo Puyo – assuming you’re less familiar with that title. Alternatively, you can dive right into the mix of genres that is the game’s story mode. Yes, Puyo Puyo Tetris has a story mode – even if it’s mostly trivial and silly stuff.

More important than the story is the fact that it’s a game mode that’s great at introducing you to the dynamic of switching between Puyo Puyo and Tetris – and increases the complexity of the game through its diverse challenges that you have to work towards. Individual stages (which see you competing against other characters you come across) all have set win criteria, which will determine how you should approach the level. This is a great way to become comfortable with different play styles, which you’ll benefit from in the game’s other modes – especially multiplayer.

Multiplayer is where the real gold is in Puyo Puyo Tetris, and if you’re into local multiplayer then this is one of the best options on the PS4 so far. There’s a large variety of game modes to choose from ranging from classic versus-esque modes to crazy blends of both games. In Swap mode, you switch between Puyo Puyo and Tetris much like you would in the story mode. In Fusion mode, game pieces from both games are intermixed on the same game board, blending styles and rules and essentially creating a whole new game with a brand new learning curve.

It’s hard not to lean towards one of the two games based on historical preference and your personal skill level, which can affect how balanced (or not) a multiplayer game feels. We’ll have to see how this develops over time, but it’s definitely not a reason to avoid everything that Puyo Puyo Tetris has to offer. In fact, if you’re fond of either one of these classic puzzlers, then get this game as soon as you can – you won’t regret it.