Perception by The Deep End Games has been out since the end of May, and we’re finally taking a stroll in the dark with his sensory-focused horror title.

The central concept behind Perception is a strong one. You play as a young blind woman who sets out to solve a mystery relating to an old house she’s been seeing in her nightmares. Being blind, she has to rely on sound to paint a picture of her surroundings – and it’s the sounds that she generates that help her do this. Walking forward means that you’re taking steps, and these footsteps cause your immediate surroundings to “light up”, allowing you to see just ahead of you.

A more effective way of doing this is by using your walking stick to tap on the floor – this creates a much wider and deeper field of vision, but it comes at a risk. Generating too much sound might attract the unwanted attention of the “Presence” inside the house, so there is a constant sense of an unnerving atmosphere all around you.

This sets up a tense atmosphere right from the start, and it’s easily the best and most standout feature of the game. When you stop generating noise the screen goes black again though, which is something that never quite made sense to me – I figured that you’d at least remember some of the contours of your surroundings and that those should at least stay “visible”, but they don’t. Because sinister things happen all around you the layout of the house isn’t always exactly the same, but I couldn’t help thinking my protagonist was also suffering from some kind of amnesia.

The story itself is rather formulaic and leans mostly on the game’s atmosphere and central gameplay dynamic, which makes it a bit of a mixed bag. The atmosphere is excellent, but the repetitive nature of banging your cane on the floor to be able to see loses its appeal somewhat quickly – perhaps partly due to the fact that you don’t “remember” any of your surroundings. 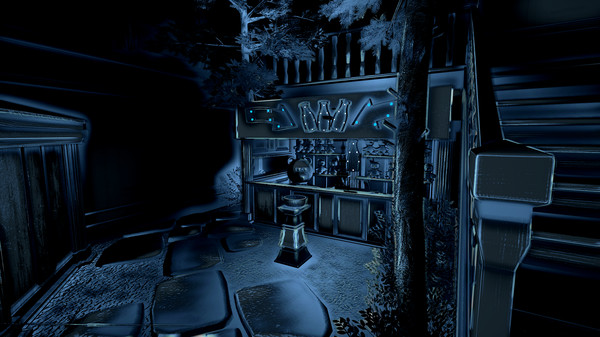 The atmosphere, on the other hand, is second to none – partly due to the excellent sound design in the game. I would recommend playing this game with headphones on for the optimal effect – unless you have a high quality surround sound installation set up. “Seeing through sound”, or echolocation, is of course dependent on what you can and cannot hear – and the terror that is generated from a mix of hearing and generating sound has been expertly crafted for this game.

The excellent atmosphere is still mostly a novelty though, and you have to wonder if that’s enough to warrant a full price purchase. It’s an interesting and original experience, but I’d wait for a sale.