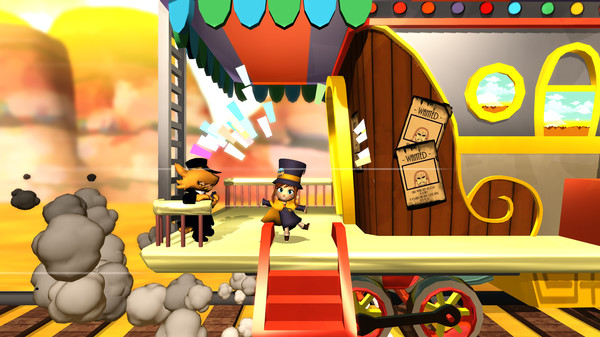 After missing out on the original PC release, we grabbed hold of A Hat in Time when it was released on consoles recently. Also available on Xbox One, we played the PS4 version.

It was actually my own mistake that caused me to miss out on A Hat in Time the first time around. I had the opportunity to see it early at a few trade shows, but it was usually surrounded by a ton of indie titles all screaming for attention. I tend to be drawn more to the games that are a little different, and the indie scene is brimming with titles that are a wacky and original. Because of that, I was too quick to disregard A Hat in Time as something very familiar in a genre I was already intimately familiar with – something that wouldn’t surprise me.

To a degree, I was right in my assumption, because A Hat in Time does indeed play to a familiar tune and wears its inspiration on its sleeve at times – a little too much perhaps, in certain areas. My surprise, however, lay in how good of a game this actually turned out to be. It’s as if developer Gears for Breakfast took a look at every retro 3D platformer that was released over the past few years (and on Steam, there’s a ton of them) and studied where they went wrong – making sure A Hat in Time wouldn’t fail on those grounds.

For instance, the camera troubles that plagued games like Yooka-Laylee (and indeed, many of the original games back in the day) aren’t much of an issue here, and there is plenty of diversity between game worlds as well. It’s got a ton of collectibles to find besides completing the main quest, and the platforming itself is both smooth and satisfying.

Speaking of the game’s main quest and the plot behind it, it’s as silly and trivial as they were back in the day – essentially boiling down to a mission structure that has you chasing after “time pieces” that power your spaceship but went missing during your space travels. You play the role of Hat Kid, a little girl who derives special skills from the hats she stitches together.

Because of this hat stitching mechanic, you’re not just collecting time pieces, you’re also going to be keen on collecting balls of yarn that allow you to craft new hats and thus unlock new skills. These are gradually unlocked over the course of the main campaign, and the game’s level design more or less keeps pace with this development as well. On the negative side this means that A Hat in Time gets off to a somewhat slow start but things get more and more interesting as you progress further into the adventure. An adventure that is, despite its silly premise, pretty much fully voiced – a nice feature in an indie title!

As mentioned, there are plenty of things to collect if you want to learn more about the game world or enhance your skills. Badges can be found and applied to hats to increase their effectiveness or add new skills, and focusing for a bit on collecting these can make a ton of difference later on in the game. Having said that, combat isn’t all that difficult in A Hat in Time, so badges aren’t a necessity and really only add a bit of diversity to the mix.

Though not genre-redefining at all – and it’s not trying to be either – A Hat in Time still manages to feel fresh. Part of that is the excellent level design that gets better as the game goes on and new skills get unlocked, but there’s also the wonderful aesthetic to enjoy. Looking incredibly cute and with characters that are generally very likeable, this is a game simply oozing with charm. It walks that thin line between having a sweet visual look and appearing like a child’s game, and it does it well. A Hat in Time is something that can easily be enjoyed by gamers of many ages – and in that sense it’s a true homage to the titles that inspired it. If you played 3D platformers in the nineties, this’ll give you a chance to feel young again.