Piecefall VR is the VR-enabled version of (you guessed it) Piecefall, a student project that was supported through the Playstation First initiative a few years ago. It’s out now for Playstation VR with a budget price point – here’s the review.

The inspirations for Piecefall VR are immediately clear, as you play the game with Tetris-shaped pieces. It’s not straight up Tetris in VR though (we’ll have to wait for Enhance’s take on that, I assume), but rather a puzzle game where you have to fit a limited amount of shapes into a pre-defined grid by dropping them in at the right angle.

It’s a bit like the lesser-known Welltris in that sense, although that’s played by launching pieces forward into a “tunnel” rather than having them drop down. Ironically, Welltris is also more “3D” in the sense that you can build layer upon layer, whereas the pieces in Piecefall VR have to all fit in one layer of blocks to complete the puzzle. 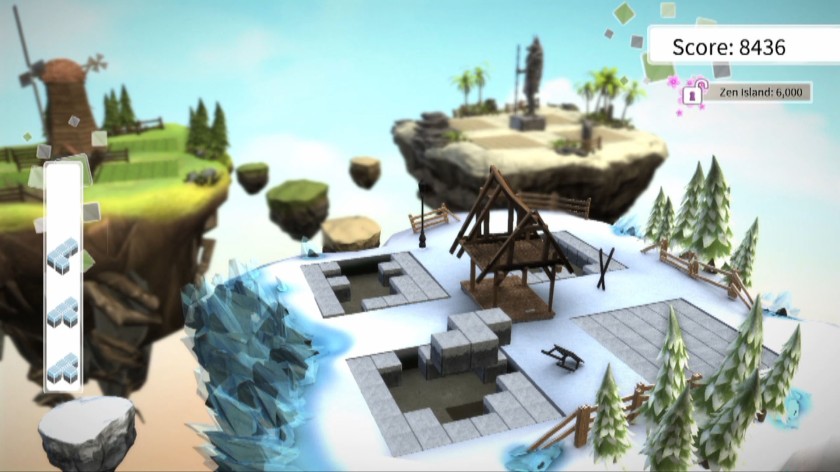 So maybe not exactly like Welltris, but more like a Tetris-themed version of the classic Tangram puzzle game. Either way, it’s easy to understand, and with a bit of experimenting it’s hard to get completely stumped on a puzzle. The number of pieces is never so high that you have no idea where you went wrong if you fail a level, so progress is generally smooth.

This quickly leads to Piecefall VR’s biggest issue – a lack of content. Its puzzles can easily be completed in under an hour, with little replay value once you’ve reached a solution for each of the puzzles. There’s a budget price tag to make up for this, but don’t expect to reach for the game regularly or even spend a full evening on it.

The gameplay itself, however, is extremely solid and a lot of fun while it lasts. The puzzles are intuitive, solving them gives you a short burst of accomplishment each time, and it’s a subtle new take on a classic formula. I don’t know if it needed a VR version though, as these puzzles (especially when you consider them Tetris-styled Tangram puzzles) can just as easily be completed in 2D – in fact, it would probably be easier without VR in terms of orientation. In that sense, VR doesn’t add much to the experience besides offering a cool but short-lived puzzle experience for the format. It’s definitely worth playing if the Tetris/Welltris/Tangram hybrid sounds appealing to you, but the fun is a bit short-lived.