With the upcoming movie sequel getting pretty close to a theater release, Survios is warming us up with their VR adaptation of the franchise. Creed – Rise to Glory is now out on PC and Playstation based VR platforms, and we tested it on Playstation VR.

That boxing was a pretty good fit for VR was already evident when we reviewed Knockout League, which featured an arcade approach to the sport and evoked memories of Punch Out. Creed – Rise to Glory is tied in to the Creed/Rocky franchise, and is thus a more serious affair, despite the stylized/cartoon-like representation of the fighters.

Not surprisingly, you play as Adonis Creed, Apollo Creed’s son who we met in the first Creed movie. The game has a story mode that sees you progress through a couple of fights, pairing up with Rocky Balboa and eventually rising to greatness. It’s fairly predictable stuff, but great fun if you’re a fan of the Rocky franchise. Sylvester Stallone’s likeness features in the game so you’re actually sparring and training with the legendary character, which is a lovely touch of authenticity. 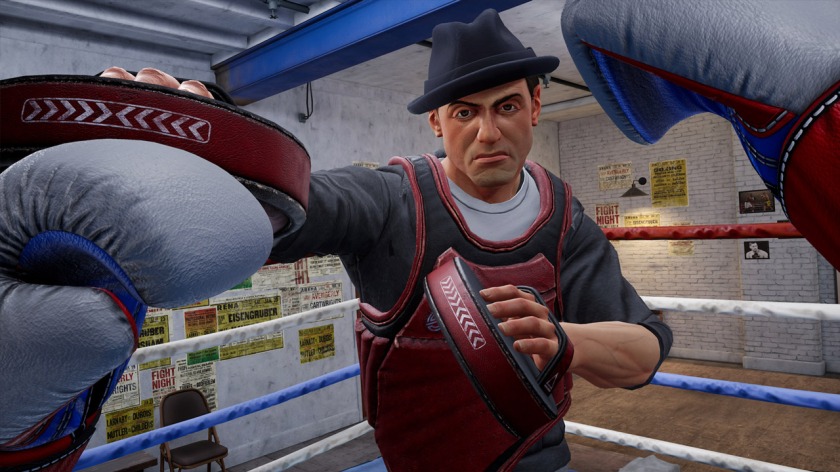 Creed – Rise to Glory also features some of the iconic tunes from the Rocky movies, which after about 40 years in the collective mindset do an awesome job of getting you immersed and feeling pumped during practice and fights. All that’s missing is the crowd going “Rocky! Rocky! Rocky!”, but that would be silly considering the fact that you’re playing as Creed. However, the Playstation VR version does give you the option of playing single matches with Balboa, a feature that’s exclusive to PSVR.

Another staple of the movie franchise, the montages that show Rocky training hard before a match, also appear in the game. Creed – Rise to Glory features several little minigames that you’ll engage in during the campaign mode as a way to get you ready for fights. A highlight reel of stuff you’ve seen in the movies, you’ll be hitting punching bags, punching at targets, defending against Rocky’s punches and smacking the speed bag. And yes, it can get tiring and warm quickly – I’m definitely happy Survios didn’t release this game in the middle of the summer at it presents a serious workout.

The fights themselves are much more of a true boxing simulation than the Knockout League fights – as was to be expected. Creed has you dodging, feinting and weaving as you defend your face and try to get a few jabs and punches in. The game also distinguishes between weaker jabs and hard punches, although going for that haymaker will leave you exposed and will likely tire you out quicker as well.

Creed also features a mechanic that allows you to move around the ring – which uses Survios’ arm motion technique from Sprint Vector. While it worked great in Sprint Vector (where you’re constantly racing forward and/or upward), it’s a little less natural in a game like this – but I understand the nature and limitations of today’s VR technology and that it’s a necessary compromise. On the player front, it does mean you’ll need a bit more room to play in than with Knockout League, which may result in having to move a piece of furniture out of the way and warning others to stand clear as you get lost in your role as Adonis Creed.

With Creed – Rise to Glory, Survios has once again delivered an excellent VR experience. A boxing game that is superior to Knockout League both in the sense of boxing gameplay and delivery, this is a VR game that’s not to be missed – and essential if you’re a Rocky fan.