FDG has just released Monster Boy and the Cursed Kingdom for the Nintendo Switch, Playstation 4, Xbox One and PC. Time to check out this nostalgia-fueled platformer, which we did on a PS4.

It’s funny how memory works sometimes. When I first heard about Monster Boy and the Cursed Kingdom’s upcoming release, my mind immediately went back to my Atari ST days where I played Wonder Boy in Monster World – the connection was immediately there, despite the (legally required) name change.

It wasn’t the first name change for the game, by the way – but with the involvement of Wonder Boy creator Ryuichi Nishizawa it always made sense to tie things into that franchise somewhat. It brought back memories of Mighty No. 9 for me, though that wasn’t exactly a universal success and made me extra curious to see how this one would turn out. It looks like I had no reason to worry.

Playing as Jin, your task is to save the world from the curse put upon it by your evil uncle – who changed everyone into an animal form. Jin’s no stranger to this kind of transformation either, as the main gameplay dynamic in Monster Boy and the Cursed Kingdom is your ability to change into up to six different animals and thus gain a different set of skills each time you transform. On top of transformations, you can also upgrade weapons and pick up items to change up the gameplay even more.

Different animal forms and new pickups mean different combat abilities, but each change also reflects a change in your platforming abilities. While that seems trivial at first, it allows you to gain access to new areas and thus bonus items and treasure – which also encourages you to go back to previously explored areas in order to grab riches that previously eluded you (since you don’t get all six animal forms right from the start and will need to gradually unlock them). Some forms will allow you to jump higher, others will allow you to go underwater – and the levels have been well designed to make use of these abilities and thus offer plenty of replayability. Speaking of which, Monster Boy and the Cursed Kingdom offers amazing value for money with a campaign that’s well over 10 hours long – and that doesn’t even include grabbing all the hidden treasures. 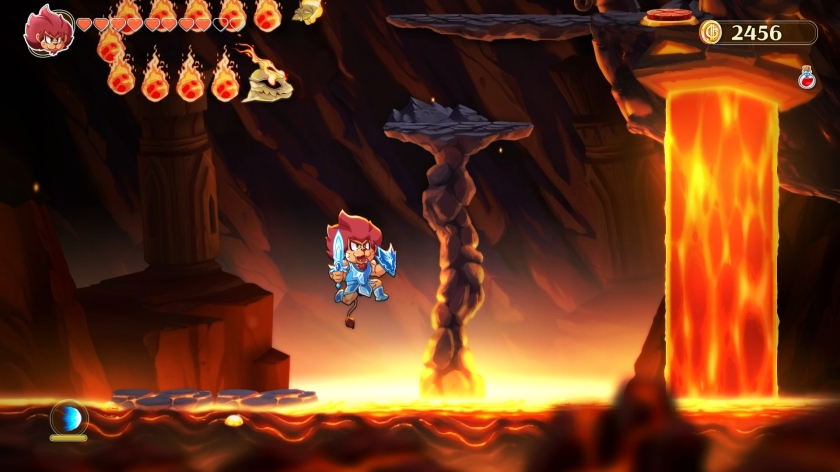 The game’s visuals are very much inspired by a classic cartoon style, and although they’re not at Cuphead’s level you’ll certainly love the graphics if you’re into Wayforward’s Shantae series, for instance. There’s a nice amount of variety in backdrops, enemy designs and boss battles – though the graphics always remain bright and colorful.

Monster Boy and the Cursed Kingdom is an extremely well-rounded and well-polished package, and its music deserves a special mention as well. For me, it felt like a throwback to the classic 80s and 90s platformers with their melodic tunes that get stuck in your head – some of which are still there two or three decades later. I’m not sure that Cursed Kingdom will have the same kind of lasting appeal, but it certainly is a wonderful retro-inspired platformer with several modern touches that make it better than the games that inspired it.

One thought on “Monster Boy and the Cursed Kingdom review (PS4)”