Developed and published by White Lotus Interactive, XING: The Land Beyond is a dream-like first person puzzle adventure that has optional support for VR headsets. It’s out on Steam as well, but we tested the game using a Playstation VR headset running on a PS4 Pro.

Although both deal with the afterlife, XING: The Land Beyond is a completely different VR experience than In Death, which we reviewed not too long ago. Instead of a roguelike shooter that provides an intense experience, White Lotus has delivered a serene puzzle adventure with a narrative element that deals with the game’s central theme – the journey between life and the afterlife.

You explore the world of XING by following in the footsteps of those who have already departed, transporting you to their part of the story and the puzzles that accompany it. The narrative raises a few philosophical questions along the way as well, but the bulk of the game is a puzzle adventure in a fantastical place – a bit like the classic that is Myst or its recent-ish VR-enabled successor Obduction.

Despite the overall theme to XING, it’s also a collection of short stories, which also translates to the gameplay. Because the game world isn’t one giant interconnected space you can freely walk in, puzzles are also contained within their own little story. This makes puzzles a bit more manageable because there’s no need to backtrack or bring items from a different location that you might need later, but it also makes for puzzle mechanics that can differ from story to story. The fact they’re somewhat self-contained certainly helps here, as mechanics can be a tad abstract and require you to engage in a bit of trial and error.

To control the game, you can make use of either a standard gamepad or a pair of Move controllers. I preferred the Move controllers when interacting with puzzles, but I could see people picking the Dualshock as well – it’s easier to move around with its twin stick setup. With its slow pace, XING works great with both setups and it’s really just a matter of personal preference. 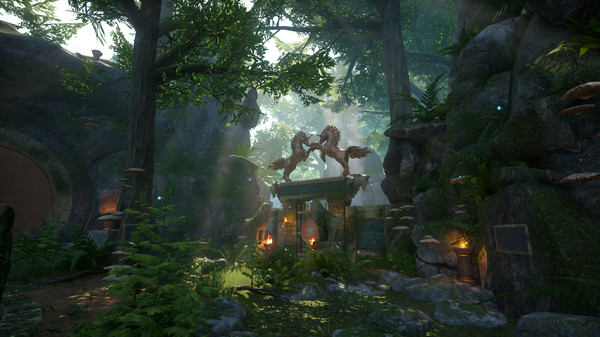 XING’s presentation, both narratively (with excellent voiceovers that relay the story in poetry) and audiovisually, really stands out among games in its budget range. Puzzles often make use of weather effects and the environment, which also dynamically changes based on a day and night cycle. These aren’t the AAA visuals of a game like Ace Combat, but White Lotus makes great use of the Unreal Engine 4 to deliver their story in a beautiful way.

After previous dream-like “experiences” on Playstation VR like Perfect, it’s great to see a title like XING pop up. While Perfect was very low on traditional gameplay, The Land Beyond offers a nice five hour campaign that’s beautifully crafted and well optimized for VR. Well worth a look, especially if you enjoyed games like Obduction or Myst.