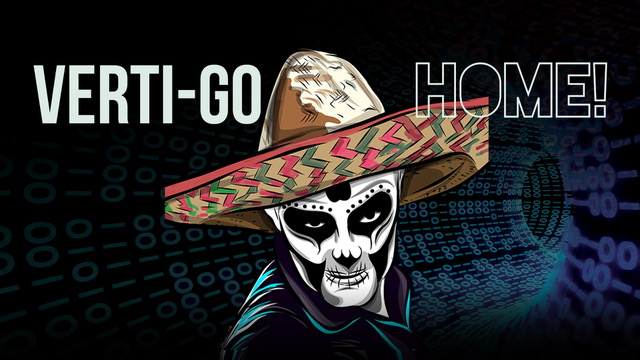 VERTI-GO HOME by developer trucker vr is one of the trippiest VR experiences so far. Out originally on Oculus, it’s coming to Playstation VR on March 1st – we played the game ahead of its release, here are our thoughts.

Essentially an endless runner that plays out in VR, I was actually thinking that it’s surprising that we haven’t had too many of them for Playstation VR. There was the optional VR update for Race the Sun pretty early on in the PSVR days, but that’s all I could come up with – and it’s about two years old already.

While fitting in the same genre, VERTI-GO HOME is quite different from Race the Sun. Where Race the Sun is all about fast reflexes and hitting the right gamepad buttons at the right time, VERTI-GO HOME controls a little bit like Eagle Flight while being as trippy as Polybius. An odd combination? Certainly, but that description of “odd” fits this game very well.

As you travel down a tunnel (or find yourself on the outside of a twisty cylinder), you rotate yourself (or is it the environment?) to make sure you don’t hit the obstacles in your way. These aren’t your regular low ceilings, pillars and holes in the wall either – expect to be dodging dancing skeletons, totem poles and rotating domino bricks. It’s like every movie you ever saw that features some kind of acid trip moment – combined.

Controls are easy enough, with head movement being enough to navigate (hence the Eagle Flight reference). Things also aren’t as potentially frustrating as Race the Sun either, as you often don’t have to rely on lightning fast reflexes in VERTI-GO HOME. Instead, as trippy as it all looks, it is a rather laid back experience as a game and doesn’t feature that punishing level of difficulty that can be found in so many other endless runners.

Is it worth the cost of admission as a game? I personally thought Race the Sun was a better gaming experience in terms of game/level design and giving me that “one more go!” feeling. As a trippy VR experience, however, I haven’t found many like VERTI-GO HOME and this one isn’t as brutal as Polybius either.