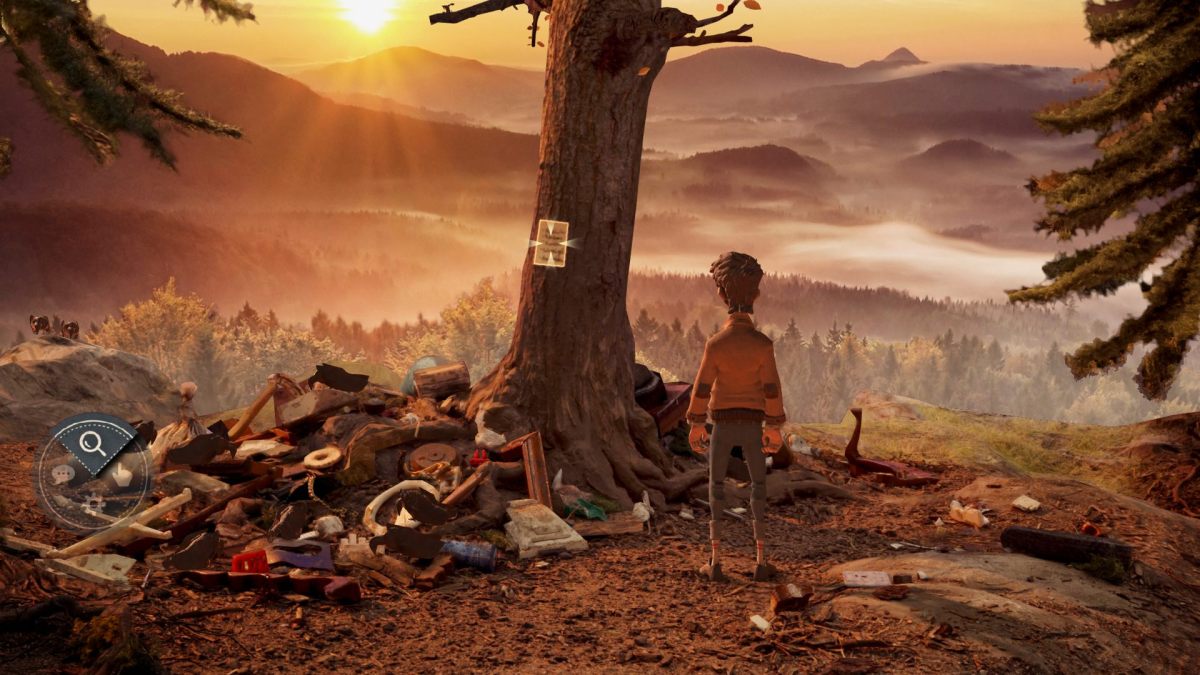 It’s been out for a little while on PC, but Trüberbrook can now be played on consoles as well. It’s available for Playstation 4, Xbox One and Nintendo Switch – we played the Xbox version of this new adventure title that was inspired by the classics.

We first took notice of Trüberbrook back in the summer of 2017, when the game was not much more than a few enticing visuals that had been released by publisher Headup Games. It looked highly polished with an air of mystery surrounding it, and we were also shown a lovingly crafted and highly detailed miniature version of one of the game’s backgrounds – miniatures that were going to be used in-game in a hybrid of real life models and computer generated graphics.

It’s a visual style that’s as striking as it is unique, since very few titles have tried their hand at it. The somewhat recent Neverhood sequel Armikrog is an example, and so is the upcoming Harold Halibut. We got to see the latter title in action last year as well, but Trüberbrook was already much further into its development at that point. A year after its unveiling, we got to see playable code that showcased the game’s knack for witty conversational humor – echoing games like The Secret of Monkey Island.

A classic like the Lucasarts titles that inspired it, Trüberbrook is never going to be – but it’s been lovely heading back into classic adventure gaming territory with it. Trüberbrook brings all the classic object hunting and combining, a silly and sometimes nonsensical plot together – complete with the ability to have everything come to a grinding halt when a part of the next puzzle eludes you.

Trüberbrook takes place in the sixties, as you travel to the German town of Trüberbrook as young physicist Hans. You’re there under the guise of a free vacation, but soon a series of mysterious events begin to unfold that pull you into a strange story that draws inspiration from sci-fi and spy mysteries of the 1960s as much as it does from the classic adventure games from the 1990s. The game is divided up into four distinct chapters and offers up a game length of about nine hours, which I feel is perfect for an adventure game that is console-bound rather than the lengthy tales we sometimes see in PC exclusives.

But although Trüberbrook ticks a lot of the right boxes, there are also a few missteps along the way. The controls can feel a little fiddly with a gamepad, and the inventory system feels like it could have been made into something more intuitive as well. The writing is what sets the good adventure games apart from the great ones though, and this is the main area where Trüberbrook falters. There are some genuinely hilarious moments here and there, but the plot as a whole doesn’t captivate the player like a classic Lucasarts title could. It’s too inconsistent for that, and the same can be said for the dialogue. Some of it is the stuff you want to reload the game for, just to see the different responses play out, but there’s a so-so interaction just waiting around the corner as well.

If you’re fan of the classic adventure game genre then Trüberbrook is certainly worth playing – it’s much more like a tale from the nineties than the Telltale brand of adventure games is, and the game comes with an absolutely gorgeous visual style as well.