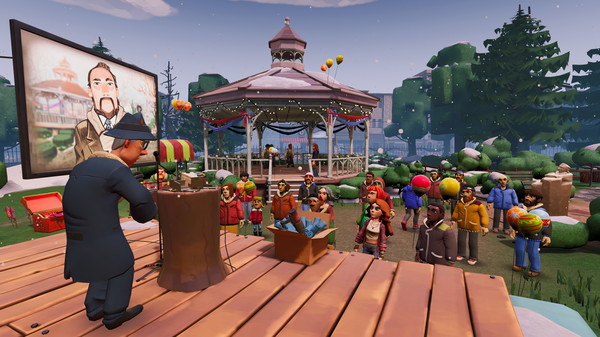 Before Edge of Tomorrow, there was Groundhog Day – a comedy with Bill Murray about reliving the same day over and over again. Now, it’s been given a VR-fueled sequel that is out for PC-based headsets as well as Playstation VR. We experienced Groundhog Day: Like Father, Like Son using the latter.

Only announced quite recently and having made an appearance during this August’s Gamescom in Germany, the Groundhog Day sequel is the result of a collaboration between Sony Pictures Virtual Reality, MWM Interactive and Tequila Works. We’re fans of Tequila Works’ previous games that include Deadlight and the highly original VR game The Invisible Hours, so we were keen to discover what their latest project was like.

On the surface, Like Father Like Son isn’t the most ambitious VR title – with relatively basic cartoon-like character models it’s certainly not the most visually impressive VR game to date, and with a live action movie as the source material it’s surprising that even a game like The Invisible Hours had more realistic visuals.

The cartoon-like approach does set the tone for the comedic events that don’t take long to arrive though. You play the role of Phil Connors Junior, and you’ve pretty much distanced yourself from your father, your family and the town of Punxsutawney. You go there for an event that celebrates the town’s history and your father’s involvement though, and that’s when you find out that you’ve inherited his ability to get caught in a time loop and relive the same day over and over again. Keen to escape your waking nightmare (and the town), you have to somehow break the loop.

When the game starts, it’s not too unlike games like Job Simulator, in that there’s a ton of stuff to do and interact with – which is great in terms of conveying a living environment to play in. It doesn’t take too long for everything to go wrong though, and eventually one of your family members drives a car through the walls of your house. Cue the time loop, and you’re back trying to prevent it from happening again.

Groundhog Day: Like Father, Like Son is divided up into smaller areas or scenes that you navigate using teleportation. In every spot, there are several objects to interact with – some trivial and some directly related to the plot or the events you’re trying to change. There are often different approaches to a scene and its challenges, which is fun and offers a certain amount of replay value (on top of having to replay a scene multiple times already, of course).

Events in a scene happen more or less in real time, so timing your actions carefully is part of the challenge, and overly finicky controllers can get in the way or selecting what you want correctly or quickly enough. This can also refer to a dialogue option, as some of the story branching happens through the responses you select when interacting with other characters.

The writing in Groundhog Day: Like Father, Like Son is a bit more mature than what you might expect from the source material. Even though Bill Murray is a pretty grumpy and sarcastic Phil Connors, you never hear any foul language in the movie – the game doesn’t hold back in this regard. Perhaps it’s just a sign of the times we live in, but the vibe is a little different and might not appeal to die-hard fans of the original.

The core concept of a time loop has been translated well to VR though, and Groundhog Day: Like Father, Like Son is a fun adaptation of a classic movie’s premise with its “you know what’s going to happen, now prevent it!” mechanic that plays out in several scenes. Once you’re gotten the gist of each puzzles the runtime for the experience is fairly short, but there’s a good amount of fun to be had in experimenting with all the interactive elements the game has to offer. Perhaps it’s not a classic like the movie, but it’s good fun that’s mostly in the spirit of the 1993 original.