A year after it was released on PC-based VR platforms, Crazy Machines VR has finally arrived on Playstation VR as well. We couldn’t wait to get started with it….

It’s been a bit of a wait for Crazy Machines VR, from my perspective at least. I briefly saw the game in action during the 2018 edition of Gamescom, but it was nowhere to be seen this year. Not entirely surprising since the game was released back in October of last year, but I was hoping we’d still see it on PSVR.

Part of that is because I’ve been playing games like Crazy Machines since the early 90s, when I fell in love with games like The Incredible Machines and Sid & Al’s Incredible Toons. Crazy Machines revitalized the genre years later, and this was to be my first take on it in VR. Sure, a game like Fantastic Contraption has a similar theme, but its levels play out on a much larger scale than the miniature mayhem that characterizes Crazy Machines. The objective in Crazy Machines VR is the same it’s always been – complete a specific objective by lining up a sequence of toy/practical objects and actions for often hilarious and/or impressive results. 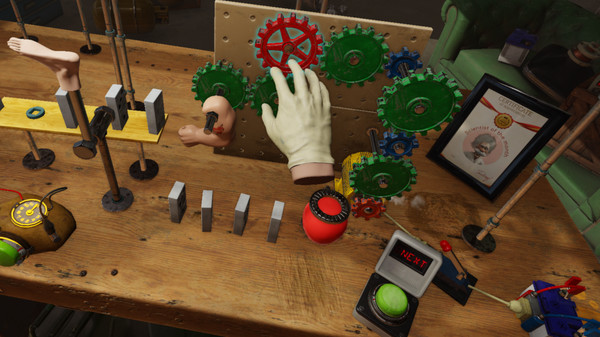 Crazy Machines VR has forty levels to complete, though the first batch of these should really be seen as tutorial levels that don’t throw too much of a challenge at you. Instead, they’re meant to familiarize you with the basics of the game (which really is a no-brainer if you’ve played non-VR entries of the game) and its controls. Because Crazy Machines has always been a “pick up an object and place it in the level” kind of experience, it works great in VR. The (Move) controls are quite forgiving too, with pre-determined spots for objects to be placed in and a mechanic that automatically rotates them in place.

Although this makes sure you don’t end up in a scenario where your placement has to be pixel-perfect (this was a bit of a thing in The Incredible Machine back in the day), it does oversimplify the experience in some of the more straightforward levels. When you don’t feel the satisfaction of having just solved a puzzle, all that’s left is for you to enjoy the end result in motion. Granted, while that is certainly fun to do in VR, it’s the later levels where the real “eureka!” moments are.

While Crazy Machines VR doesn’t have a level editor to help you craft your own creations, it does feature a number of sandbox levels that allow you to play around with some of the physics-based gameplay outside of the confines of the carefully designed puzzles. While I preferred spending my time with the actual levels, the sandbox environment do provide a fun little diversion to more casual VR gamers or as a fun little VR demo for newcomers. Spend more time with it, and I can definitely recommend heading towards the campaign mode, where those 40 levels are connected via an actual story as well.

The actual gameplay in Crazy Machines VR is familiar, though puzzle elements generally feel a little bigger than they did before. This is most likely because of practical and technical reasons. VR’s not quite far enough when it comes to rendering minute little details and it would be tricky to comfortably control and navigate everything with smaller objects as well. There’s an impressive physics engine at work though, with things toppling over and moving exactly how you’d expect them to. This makes seeing things unfold in VR a joy to watch, and it even makes it fun to intentionally mess up just to see what happens when you derail the intended chain reaction.

The PC release of Crazy Machines VR was met with some criticism about its performance and perhaps this is why the PSVR version took a bit longer than originally planned. It looks like that extra time in the oven paid off though, because the Playstation version feels quite polished indeed. The controls are responsive, the visuals are detailed, and I didn’t notice any performance issues either (playing on a PS4 Pro).

I can definitely recommend the PSVR port of Crazy Machines VR to those who enjoy puzzle games in VR like Statik or Tumble VR. This one, like those examples, now ranks among my favorite in the genre.