Vitamin Connection is a brand new Switch exclusive title from WarForward that is among the Shantae publisher’s best games yet. Here’s why.

The central premise of Vitamin Connection is that you get shrunken down to a miniature size and explore the inside of a body, ridding it of enemies and making vital organs healthy again. It evoked memories of movies like Innerspace and games like Microcosm, but this is nothing like the 1993 game that relied heavily on impressive (and – for the time – realistic) pre-rendered videos but had little to offer in terms of actual gameplay. In fact, Vitamin Connection is quite the opposite, with cute visuals and a ton of fun game mechanics to engage with.

This is also one of those rare titles that makes good use of the Switch hardware (like the IR Motion Camera), designed around innovative new mechanics that feel like a natural fit with Nintendo’s console. Played as a single or cooperative two-player game (which is the better option), you take control of Vita-Boy and Mina-Girl as you defend members of a family (the Sables) against an invasion of bacteria. 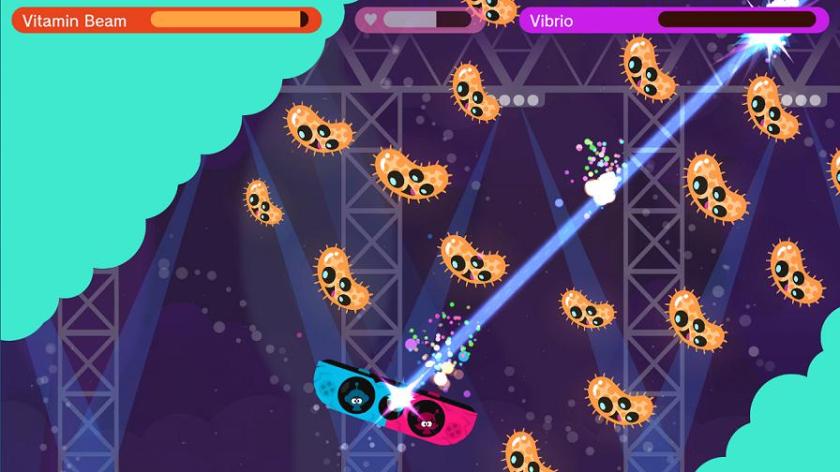 As you pilot your capsule/ship around the body of one of the members of the family (which features in a sort of meta-narrative), you quickly learn the basics of navigating around the body and eradicating the virus. The bigger story is told through fun, cartoon-like cutscenes, and having the actual family members and their real world challenges to care for makes the gameplay easy to relate to. The visuals in the cutscenes also translate very well to the in-game graphics, which are also cheerful and colorful – which happens to also be a great description for the music in the game.

Navigating the body isn’t an on-rails kind of experience like it was in Microcosm, and it can be tricky to get where you need to be – sometimes hitting a dead end on your way to your destination. Controlling your ship solo means you’re playing it with a slightly more traditional control scheme, whereas the action in two player mode is divides between piloting the ship and firing the primary weapon for one player and rotating and aiming the cannon for the other player. There’s a definite need for teamwork, but it never feels like you’re working against each other.

Those are just the basics though, as the game gradually introduces a huge diversity of gameplay mechanics as well as enemy types and challenges. Besides moving and shooting those terrible bacteria, you’ll also find yourself hauling things from one place to another once the right ability is introduced – something the affects your ability to navigate. A testament to good game design is that there’s always something (new) to do in Vitamin Connection, and with the cheerful audiovisual presentation it never stops feeling like fun.

At regular intervals you’ll also hit set pieces/boss fights that play out as minigames of sorts, and these will also be available to play as standalone modes outside of the main campaign. As with the ever-changing ‘regular’ gameplay, these are also breaths of fresh air that help with the game’s pacing. They tie into the narrative, but can be played just as easily by themselves. And speaking of content and ways to play, we were also pleasantly surprised to find that there’s a ‘new game plus’ mode that unlocks after completing the main campaign. We haven’t played it all the way through yet, but it looks like it mixes up the game in more and meaningful ways than some of the other “+” modes we’ve seen – with new objectives and narrative elements.

If you like your console for its exclusive titles, then Vitamin Connection is one of those rare releases outside of a handful of AAA games that feels really special on the Switch. It shines especially bright during cooperative play, so if you enjoy a social setting for your games then this is a must-have eShop title.