HyperParasite, developed and published by Troglobytes Games, is out now for PlayStation 4, Xbox One, Nintendo Switch and PC. An indie rogue-lite with an addictive hook and a retro vibe, we played it on a PS4.

The premise of HyperParasite sounds a bit like it could be the plot for a cheesy 80s sci-fi movie – an alien parasite ends up on earth, and is able to overtake the organism it attaches to. In true Invasion of the Body Snatchers style, it can control the organism that it attaches to, which includes access to special attacks that are different for each character. In this scenario, you’re actually the alien parasite.

By yourself, you’re pretty harmless and earth’s defenders (the president has alerted everyone to your presence and wants you taken out) can easily take you out. Once in a host body, however, you become as strong as that character and also ‘borrow’ his weapons to defend yourself with. Run out of health and you’re not dead, but you return to your vulnerable parasite form and need to quickly find another host or risk your run ending. 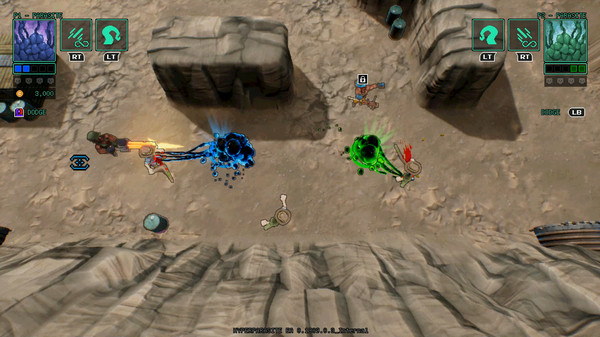 Death forces you to start back at the beginning, but you keep access to the character types you’ve unlocked. You see, when you first play you can only latch on to one specific character type – and all the others have to be unlocked gradually by picking up their brains (if they’re dropped, which doesn’t happen often) and by unlocking them in the in-game store. This means that the first time you play you’ll end up in rooms where you have no enemies that you can actually take over, but in later playthroughs you can freely switch between bodies as you please. Obviously, this makes things easier, but it takes a few tries (and deaths) before you get to that point.

A wide range of characters is available, and there is a good amount of diversity on the roster. Depending on what you have unlocked and what’s available in a particular level/room, you can switch between melee or ranged characters, ones with a lot of firepower or speedy characters, and so on. Unlocking more characters to leech onto doesn’t just make your chances of survival greater, it also makes the gameplay more diverse and fun.

HyperParasite can be frustrating at first though, as its learning curve is incredibly steep in the beginning (when you only have access to one character type) and gets more manageable over time. It’s a game you need to stick with in order to get fun out of it, so it’s not something you can casually pick up and play for a few rounds. You’ll also initially have some difficult choices to make, as you need to spend your limited funds on either the ability to unlock new characters or stay in the game longer by giving you temporary boosts for the character(s) you already have. It’s tempting to do the latter, but it’s often a short term gain and a long term loss.

Once you hit a sweet spot where enough characters are available to you, HyperParasite becomes a lot of fun to play, with excellent controls and solid twin stick shooter gameplay that at times reminded me of arcade classics like Smash TV, a 1990 classic. Once you have enough options to give yourself a shot to keep going after your host dies, HyperParasite becomes an addictive experience that’s easy to come back to – just enough to get past that next tricky boss fight. It’s that point where you’ll go back to considering those temporary boosts again – so you can arm yourself to the teeth and take out that boss. After you do, the cycle of unlocking begins again, and before you know it you’ve poured ten hours into the thing. That can’t be a bad sign.

One thought on “HyperParasite review (PS4)”