Gamescom may have wrapped up, but we still have a couple of interesting indie games to highlight for you. We’re continuing our series of Indie Interviews with a look at Absolute Territory: The Space Combat Simulator. Developed by solo developer Dan Woods at Digitum Software, it comes out on September 1st, so we were super happy to have the chance to talk to Dan about the game during crunch time. There is a demo available for the game as well.

What made you start working on Absolute Territory?

I’ve always wanted to make a space combat simulator, and there was no more interest (outside of an indie setting) for these types of games. Rather than wait for someone else to make one, I decided to make my own. This has evolved into what Absolute Territory is today.

I have a love of Sci-fi and watching the original 70’s Battlestar Galactica, Star Wars, Buck Rogers, Star Trek and Babylon 5 in my youth enflamed a passion within. My main inspiration came from the many hours spent with Wing Commander on my Amiga 500. As time went on, I found that I enjoyed playing this genre, somewhere in between arcade and realistic simulation, which the Wing Commander series hovered around (with the one exception). A secondary inspiration was I-War with its physics engine, a first for the genre if I recall correctly. 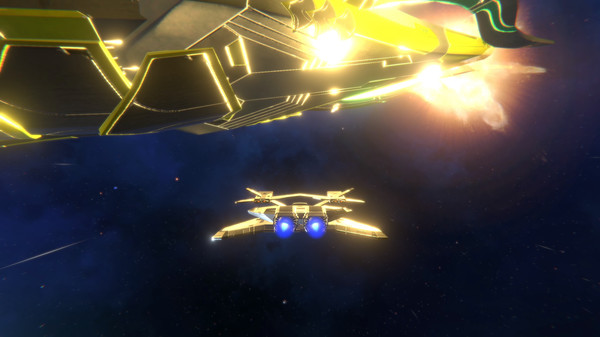 What sets the game apart from similar games in the genre?

1) Physics. Using forces for rotation and velocity (speed) changes. Since there is no drag in space, your space fighter won’t keep flying where you point it after a turn. A Flight Computer will control the Reaction Control System (RCS), compensating for your direction changes to maintain manageable speeds using the ships’ thrusters and main engines. Each space fighter in Absolute Territory has its own mass and thrust and won’t handle the same.

2) The Level Editor. This is in-game, allowing players to test ideas as they create, and was 100% used to create each mission for the campaign. You could recreate the campaign missions yourself with the mission editor if you were inclined to do so. The crux of the mission editor uses Conditional Actions. These respond to and drive events in the game world, using conditions (i.e. when the player reaches a waypoint) to drive actions (i.e. spawn in some enemies), allowing the player to make interesting and varied missions.

How did the creative process behind the visual/art style develop over time?

I tried for a low polygon aesthetic, which looked nice. I wanted Absolute Territory to have a more realistic environment, given its complexity with physics and various control mechanisms. I researched models, visuals, and sound effects that would fit in together. I found a model package that allowed kitbashing of components to design your own unique style of space fighter. Those turned out to what you see today, combined with a variety of other paid assets.

Who is behind Absolute Territory?

There is me, Dan Woods. I am an indie developer currently hiding behind the guise of Digitum Software. I love Sci-fi in film, TV, video games, especially space combat action/simulation set in futuristic settings. I also enjoy programming. Combining these elements, I decided to develop my space combat simulator Absolute Territory.

What have been some of the more interesting challenges during the development process?

There have been many challenges, though I am not sure I could class them as interesting. The biggest challenge I faced was using physics to apply forces to move and rotate the player’s space fighter, ensuring the controls felt responsive and intuitive. Then providing the AI with the ability to pilot their ship without wildly steering all over the place.

The Level Editor was something entirely different from the rest of the project. With video games, bugs tend to hide well in the whole interactive and moving environment and are not easy to spot. Less so with the Level Editor. The challenge there was to ensure anyone can just get started with simple missions, expand on their ideas with Conditional Actions, and then share their creation with other players using Steam Workshop.

2020 has been a bit of an unusual year – did this affect the development of the game and how far into development are you?

I work a full-time job whilst working on Absolute Territory in my free time. My job role is classified as an ‘Essential Worker’, ensuring I can maintain working through the current circumstances. Other than dealing with what the world is dealing with, there was little impact on development. I have been fortunate in that regard as it allowed me to continue self-funding the development of Absolute Territory.

Ultimately, I hope players will find out that space games are awesome!
I want players to have fun with the campaign and instant action scenarios, learning new skills to outwit your opponents in a new environment literally out of this Earth. To continue playing and sharing new experiences created by the community for a long time to come.