As October’s string of Halloween-inspired releases continues, we take a look at Remothered: Broken Porcelain. It’s out for the Switch, Xbox One, PS4 and PC.

The original game in the series, Remothered: Tormented Fathers, was well received by fans of the horror genre back in 2018. Broken Porcelain ties into that game narratively, so it helps if you’re played it even though it’s not a necessity. Story-wise, you’ll quickly recognize a few familiar tropes from the psychological horror genre, as you journey to an old and haunted hotel that’s sitting atop a snow-covered mountain. It made me feel a bit like Ewan McGregor in Doctor Sleep.

You enter as a young girl called Jennifer, and quickly find yourself hiding from a murderous hotel maid – not exactly laying out the red carpet for you. It’s a thrilling and exciting start, as both the environment (of a seemingly abandoned hotel with creepy lighting) and the situation put me on the edge of my seat.

The momentum dips shortly afterwards though, because Jennifer isn’t built for physical combat and the game’s stealth approach is slow-paced. When encountering enemies, you have to creep up behind them in order to activate an attack prompt, and if you fail because of Jennifer’s seemingly low sense of urgency then odds are that your current enemy will turn and notice you – and demonstrate that he’s faster than you and will most likely find you when you’re hiding – mostly because you feel like you can’t quickly make and/or change decisions during these cat and mouse sequences.

Some of this ties into technical issues with the game, which many have already talked about. During our testing period, however, we saw new patch go live, so you might very well have a smoother experience when you start from scratch. Taking a closer look at the patch notes for the PC version, we’re noticing a new patch being pushed out roughly every two days – so the developer clearly realized this is a game that needed more time in the oven. The certification process on consoles takes a bit longer so you won’t get that kind of frequency there, but you can at least rest more easily knowing the game is actively being worked on – although that isn’t an excuse for the state in which the game was released. 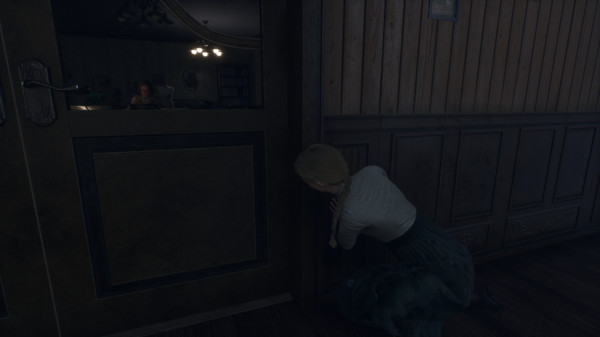 Remothered: Broken Porcelain doesn’t feature puzzle-based gameplay in the same sense that Tormented Fathers did, but instead makes use of a supernatural ability to control a moth by transferring your conscious self into it. From there, you can do things like create distractions that allow Jennifer to escape, but it’s a mechanic that’s tied more to specific situations than it is an integral part of the gameplay. The ability also has a cooldown after use, further demonstrating this isn’t something you’re supposed to use non-stop. There still are regular puzzles as well, but they’re far smaller in number than they were in Tormented Fathers, which is a shame as those provided nice breaks in the game’s pace for us.

Now, these breaks come in the shape of flashback sequences that you can play through, which are more narrative-driven and shed more light on Jennifer’s character. As flashbacks, they also feel like echoes of what could have been, since these scenes feel more polished than the ones that involve somewhat broken stealth (and moth) mechanics. It’s a shame that the potential of Broken Porcelain only really shines through every now and then, because the world is certainly interesting enough and the visual atmosphere is suitably creepy as well. It doesn’t work in terms of a review, but let’s hope that when we go back to the game in a few weeks, we’ll have an experience worth revisiting. Judging from the patch notes, it’s heading in the right direction and the game might end up being worth more than the score below suggests.