With new consoles and big titles being released almost daily, it’s hard to find time to play many VR titles these days. We picked out two worthwhile new releases though, with Walkabout Mini Golf for the Quest (and of course the Quest 2) and the brand new PSVR version of Twilight Path.

We were originally going to cover the Quest 2 by itself first and use a few games and updates as examples, but we had so much fun with Walkabout Mini Golf that we wanted to cover it outside of that feature after all.

Golf is a great fit for VR, or any kind of motion controlled system really. We saw this on the PS3 with Sports Champions 2, and we used the same motion controllers on the PS4 with Everybody’s Golf for the PSVR. As long as the motion controller works reasonably well, it’s an incredibly intuitive experience, and we were eager to experience it wire-free on the Quest for the first time.

In Walkabout Mini Golf, the controls are mapped to a single Touch controller, which when you think about it makes perfect sense, since you’ll want to use your other hand to stabilize your ‘club hand’ and another Touch controller would just get in the way of that. Moving around is done through teleportation, with a degree of roomscale controls providing the final touch when lining yourself up for a shot. The only aspect that’s less than realistic is that your club will clip through objects in the environment, but the alternative would have been incredibly unpractical and courses are designed in such a way that this never becomes a bother.

The controls themselves feel very responsive and accurate, providing an experience very similar to playing a real life round of mini golf. I’m sure it would be much harder to capture the subtle nuances of “real” golf in a VR title, but for mini golf the physics feel very lifelike. There are 72 (!) holes to play on, and on ramps and downward slopes it always feels like the ball behaves exactly like it should even when the courses themselves aren’t always realistic – with some crazy designs that wouldn’t make much sense in real life.

Visually, Walkabout Mini Golf’s developer has opted for a cartoon-like style, with a low poly look that of course works very well on less powerful VR setups that rely on a mobile chipset like the Quest. It’s also a look that works very well with the over the top course designs that the game uses, with holes that are fun to just explore – which is also a way in which you can look for hidden golf balls. These collectibles can also be used to unlock additional features, like a night mode, so it’s worth spending some time exploring each hole.

And as much fun as Walkabout Mini Golf is by yourself, it also fully supports online multiplayer, where you can walk and play the courses with one or more friends while engaging in voice chats with each other. It perfectly complements what is ultimately a casual experience that’s fun to play solo and even more fun to share with others. What’s great is that the game also supports multiple users on the same account, so friends can bring their own Quest and play a few rounds with you! Amazing value for money and the best part about having a Quest 2 sitting next to the original Quest right now.

When Twilight Path was released for PlayStation VR, it came as a surprise – mostly because the PC release was already two years old at that point and I wasn’t expecting it anymore. I really enjoy puzzle games in VR though, so I was looking forward to trying out this one as it had been a while since I last fired up the PSVR for a puzzle adventure.

Developer Charm Games was previously responsible for FORM, which was well-received, and Twilight Path follows a similar approach in how it takes a story-driven approach to puzzle-based gameplay. The story, this time, finds the player locked in a kind of purgatory, and in order to return home you’ll need to help a few NPCs by paving the proverbial road and getting rid of the obstacles in your way – restoring the world you’re in while you’re at it. For a game that ultimately was well under two hours long, the story packs quite a lot into it – even though the end comes rather suddenly when it does and leaves you feeling like there was more to be explored here.

The actual gameplay isn’t highly original if you’ve played a VR puzzler before, and often relies on motion controls to piece things together or activate the next part of the puzzle. Because the game doesn’t rely on a single puzzle mechanic that it builds on to create ever more complex conundrums Twilight Path never becomes truly challenging for puzzle enthusiasts, but offers a relatively casual but pleasantly diverse experience instead. You’re gradually offered new powers to help you tackle whatever’s in front of you, so there’s a good mix of mechanics here even though we’ve seen most of them in other VR titles at this point. 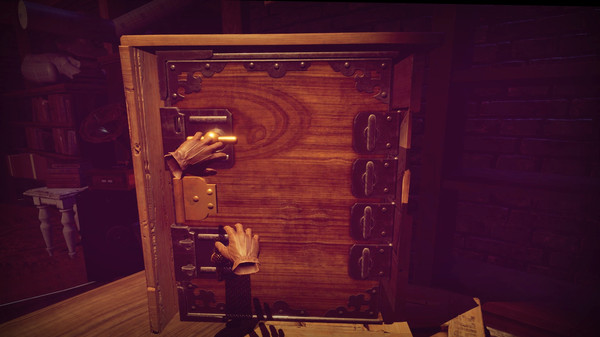 Twilight Path might be too linear and devoid of challenge for some, but it’s one of the better looking games for PlayStation VR in a while and the fact that it’s narrative-driven makes it a lot of fun to play while it lasts – the latter part there ultimately being the game’s weakest point. Since it clocks it at well under two hours, it’s relatively expensive even though it was released at a budget-friendly price point. Considering the limited amount of replay value, this is a game for those looking for a one-time VR experience that’s a decent showcase for what the medium can do but ultimately not much more than that.