After the usual insanity that is November in terms of the sheer number of games coming out, December is looking like it’s going to be a good month as well. Not just because Cyberpunk 2077 got delayed, but also because the sequel to Puyo Puyo Tetris comes out on December 8th. Sega’s Puyo Puyo Tetris 2 is heading to the Xbox One, Xbox Series X, PlayStation 4, PlayStation 5 and Nintendo Switch, and on that last platform we were able to go hands on with an early build for the game. It’s also coming to PCs early next year, and it’s worth pointing out that the PS5 version will be released a few weeks after the rest of the console editions.

It’s already been well over three years since cross-over action puzzler Puyo Puyo Tetris came out – we reviewed it back in April of 2017. We absolutely loved it and gave it high marks for its fresh blend of two gameplay styles and implementation of multiplayer gameplay.

As with the first game, Puyo Puyo Tetris 2 features a story mode, which contain a brand new storyline filled with the same kind of silly characters and story arcs that we saw in the first game. It’s ultimately forgettable and not where the long term appeal lies, but a great way to gradually get acquainted with the game’s mechanics without having to dive straight into the gameplay.

New in Puyo Puyo Tetris 2 is the Skill Battle mode, which uses cards during gameplay. There’s also a pre-order version available that grants players access to several additional cards. This limited edition contains a pack of eight cards, three of which are based on the Sonic the Hedgehog series for even more cross-over fun.

In addition to the screenshots and footage that’s been coming out for the past few months, we were also able to go hands on with the Nintendo Switch version of the game with a pre-release build. During that time, we mostly focused on the story mode and the new Skill Battle gameplay, spending the bulk of our time in single player while also trying out the local multiplayer options (the online multiplayer, during this pre-release phase, obviously wasn’t an option).

The first part of the game we dove into was the new story mode, which features both familiar and new characters in another silly take on the Puyo Puyo and Tetris universes that a few years ago you didn’t even know existed. You’ll hop between dimensions in a tale where every story beat inevitably ends with some Puyo Puyo Tetris gameplay, with challenges gradually getting more complex over time. Ultimately, it’s a great extended tutorial in disguise and will definitely benefit your long term enjoyment of the game, so we’d recommend starting there if you’ve already played the first game. If you haven’t then a lessons mode will teach you the basics, and you can dive into the story after those.

Speaking of gameplay modes – Puyo Puyo Tetris 2 has a ton of them and includes classic modes like Versus and Fusion as well as several other takes on the core gameplay for both single and multiplayer fun, but also features puzzle challenges and support for four players at once. 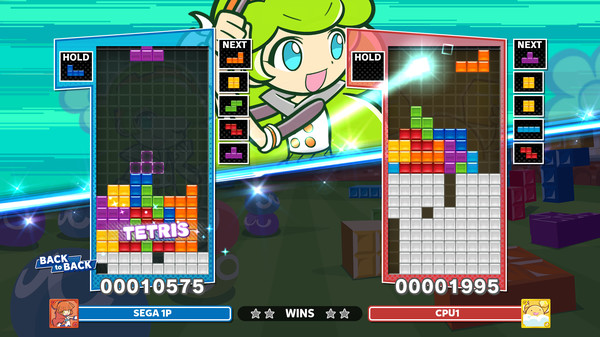 The new Skill Battle Mode is the most eye-catching new feature in Puyo Puyo Tetris 2 though, and it’s a competitive mode that expands the traditional Versus mechanics with a few new gameplay elements inspired by RPGs and card battlers. Before a match, you select a team of three characters, and making matches and popping tiles builds up your MP stat bar. So far, nothing new, since you’ll be using this to attack your opponents and chisel away at their HP bar in order to win. Skill Battle is more character-based though, so depending on which characters you select you’ll have unique skills and attacks at your disposal, adding an additional layer of strategy. You can also use the cards, mentioned earlier, to boost your stats, adding character building/RPG-like elements to the mode.

It’s a fun and expanded take on familiar gameplay that’s certainly worth exploring and should provide a lot of long-term entertainment because it feels like it’s a mode that will receive post-launch DLC through new characters and cards as well, so it’ll be interesting to see how the community takes to it. Luckily, we won’t have to wait much longer – Puyo Puyo Tetris 2 comes out in about three weeks.