Developed by Omega Force and published by Koei Tecmo in Japan, Hyrule Warriors: Age of Calamity is a Breath of the Wild spin-off that managed to be different while also remaining faithful to the original. It’s out now on the Nintendo Switch and if you’re anxiously waiting for Breath of the Wild 2 then this one should more than tide you over for a while.

Although everything takes place on the same world map, the events Hyrule Warriors: Age of Calamity take place well before those in Breath of the Wild – emphasizing the massive conflict that engulfed the world at that time. It’s an era that’s regularly referenced in Breath of the Wild, so the ability to explore it up close for yourself is fan service in and of itself – and many little story nuggets help flesh out the lore for loyal fans as well, through characters, quests and items you encounter.

Hyrule Warriors: Age of Calamity isn’t like other Zelda games though, and the fact that Omega Force developed it with Koei Tecmo should have already pointed you in the direction of this being a musou-title – one where countless enemies will fall at the tip of your blade. There is a lot more story and lore than you’d expect though, and it starts with an intro sequence and battle in which Link is your first protagonist.

It sets the scene for the rest of the game, which features a story in between the musou combat that’s told through impressive cutscenes that tell an epic story. I’ve played a lot of musou titles where the combat ended up feeling like meaningless hacking and slashing, but thanks to the narrative approach in the new Hyrule Warriors the combat feels a lot more meaningful. It also affects the Zelda lore as a whole, because the cutscenes and little blurbs of text that pepper the experience all help to flesh out characters and events in more depth. As a result, I look forward to playing through Breath of the Wild again with a newfound appreciation and understanding of the game world, even though I’ll no doubt still have questions leading into next year’s sequel.

Story development isn’t the game’s only weapon against monotony, as you can frequently switch between characters – each with their own unique style, weapons and attacks. You’ll gradually unlock more and more, and you’ll also gain access to additional (combo) attacks as you progress. This keeps the gameplay in Hyrule Warriors fun, even though the enemies themselves are lacking in variety. Zelda herself also plays a far more prominent role here than her usual supporting character, damsel in distress gig, which is a pleasant change.

The Breath of the Wind connections don’t stop with the narrative tie-ins, they also feature prominently in the gameplay. The Sheikah Slate returns, giving you access to statis, remote bomb, magnesis and cryonis attacks – which can also be strung together with regular attacks for devastating combos. In many cases, this also means you can get creative, which is another way in which the combat stays fun and keeps from being repetitive – although of course you can always resort to simple button mashing if you want to. Combos aren’t required in regular combat most of the time, but become crucial when squaring off against the game’s bosses, which require focus and the ability to string moves together to take down their defenses and deal damage while staying out of harm’s way yourself.

Hyrule Warriors: Age of Calamity suffers on the technical front though – or maybe the Switch just struggles to keep up. While the developer has done a wonderful job in crafting a game that is visually faithful to Breath of the Wild, it doesn’t run as smoothly as Nintendo’s system-defining action RPG. Frames get dropped frequently when the action gets frantic, which hurts the flow of combat. The game remains fun to play, even during those situations, but it’s hard to shake that “this should’ve been smoother” feeling mid-combat. 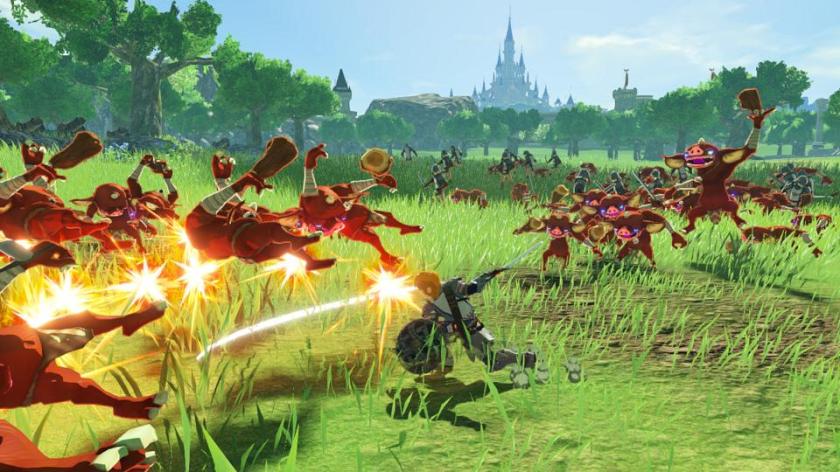 Part of me hopes that the in-game performance will improve with post-release patches and is a result of the game being developed with a strict holiday season deadline in mind, but a more reasonable scenario would be a few tweaks to the camera system. At release, the auto-camera can provide awkward and even obstructed views of the action, which I’m guessing is an easier fix than pushing more performance out of the Switch.

But look past those technical issues and you’ve got a really entertaining Zelda spin-off in Hyrule Warriors: Age of Calamity. Its narrative ties into the lore of the core series very well, as does the visual style. Omega Force has even tweaked the gameplay in a way that enriches the Warriors formula with distinct Breath of the Wild influences. Unless you have an aversion to the musou genre, this is a game that Zelda fans won’t want to miss.

One thought on “Hyrule Warriors – Age of Calamity review (Switch)”