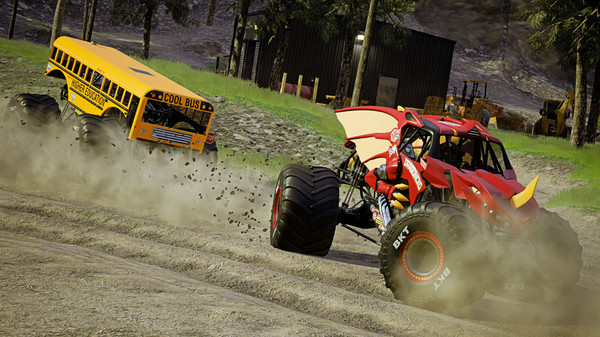 Monster Jam Steel Titans 2 is the second monster truck game we’re testing in a short period of time, after looking at Monster Truck Championship earlier – which is getting a PS5 version very soon as well. Steel Titans 2, developed by Rainbow Studios and published by THQ Nordic, is available now on PlayStation 4, Xbox One, Nintendo Switch and PC – we took at a look at the PlayStation version on a PS5.

The first Steel Titans game came out not too long ago in 2019, and from the engine to the content the sequel doesn’t change things up too much. Racing with monster trucks isn’t all about pure speed and is more about horse power and large bulky vehicles, and the end result is a racer that’s mostly pleasant to play as it doesn’t rely on split second reflexes but rather on careful controls. This is especially true for the outdoor locations, where uneven terrain can easily turn your truck upside down.

A career mode is included, emphasizing a good diversity of races and events and offering a quick progression through the various gameplay modes, making it a great place to start from before diving into the individual gameplay types later for longer events. There’s straight up racing, a bit of showmanship, and then of course there’s plenty of destruction for you to cause. 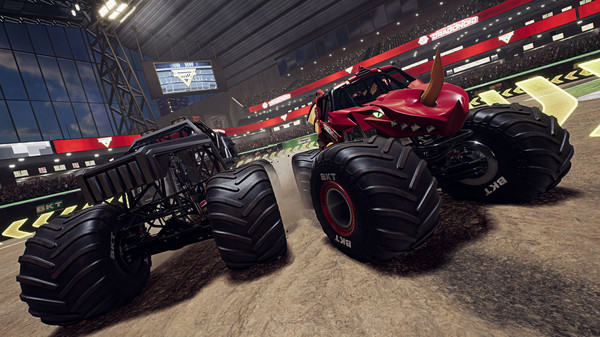 Events that focus on destruction and/or the ability to rack up combo points through jumps and tricks will probably feel most familiar to anyone who’s ever seen a promo for a Monster Jam event or has even attended one. While neither option feels like it has the substance to entertain for a long period of time, they’re fun to jump into and certainly provide thrills to anyone with a fondness for these trucks, many of which are licensed recreations of their real life counterparts.

The developers must have realized this, and have also added outdoor locations as well as more traditional races that are more akin to what we’re used to from other racing titles. Sure, you can still engage in a monster truck arena style race, but you can also take the action outdoors and engage in point-to-point racing there. Besides the obvious change of pace, this also adds the unpredictability of the terrain as an extra challenge – and it’s one with a learning curve that should add some lasting appeal to the game. 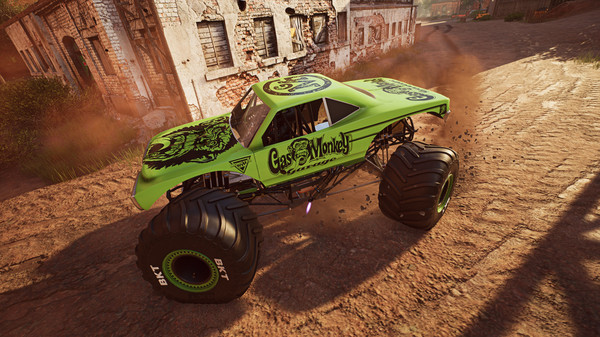 What generally helps in learning the ropes is to stay behind and watch the AI opponents do their thing. It’s often easy enough to get an early lead, but intentionally botching the start is actually a pretty decent tactic in learning how to navigate a race – something that also helps in the less-than-optimal signposting in the game. Outdoor races give you a lot of freedom to carve out your own path, but without guidance this can lead to frustration.

Visually, Monster Jam Steel Titans 2 doesn’t improve too much on the first game, but it does have some great new outdoor locations that are wonderfully creative in their designs and fun to watch and race through. The trucks themselves look good too, and despite these being licensed models the license holders must not have had any issues with their cars getting seriously banged up – no one is afraid of a solid destruction model for the visuals here.

Monster Jam Steel Titans 2’s biggest fault is that it doesn’t innovate much over the first game, and if you picked that up at some point then you’ll likely feel underwhelmed with the sequel, unless what you were craving was some online multiplayer action. Steel Titans 2 brings the action online, in addition to offering local split screen gaming. It’s an improvement over the first game, but only marginally so and therefore a tough recommendation unless you really dig the license but somehow didn’t pick up the first game.