Radio Viscera was just launched on Steam by Alliance, and offers classic top down shooting from an isometric perspective for a fun but slightly flawed experience, at least at launch Here’s our review.

The game was developed by Fire Face Corporation, and although that makes it sound like there’s a company behind the game that easily puts larger studios to shame in terms of size, Fire Face is actually a one man studio. We chatted with solo indie developer Owen Deery earlier about his game, for which we did nearly all the work himself – from gameplay design to programming to visuals and audio.

That’s enough to color us impressed with Radio Viscera without even playing a minute of it, but luckily we also had plenty of fun with the game. For those old enough to have lived through Y2K, there’s a fun setting that features a satanic cult obsessed with Y2K paranoia – something that was prevalent in the late 1990s but ultimately wasn’t quite the world ender some were assuming. Largely set in the compound of this cult, Radio Viscera doesn’t always make the most out of its setting (which offers tons of opportunities for fun nods), but it does manage to be very funny at times – especially during cutscenes and tutorial portions. 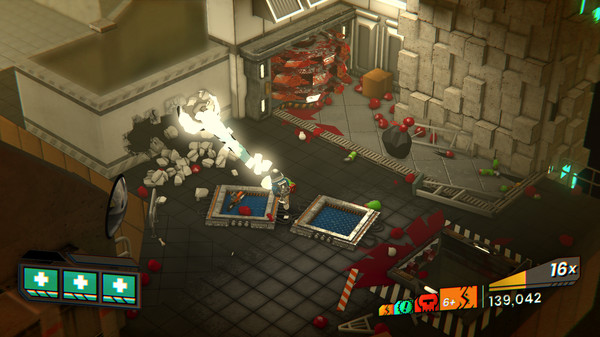 Gameplay-wise Radio Viscera feels like a mix of the fast paced arcade action of classics like Smash TV and the isometric/futuristic visuals of games like Crusader: No Remorse. After learning about your basic running and jumping controls, you quickly run into the air powered rifle that stays with you the rest of the game and is a source of great destruction. You can take it out on enemies directly, but you can also destroy walls to craft new paths through the environment. Or, and that’s the most fun part, use it to blast enemies into hazards you find everywhere, including giant sawblades.

There’s also a bullet time-like mechanic (the term here being a tad ironic in a game without bullets) that slows the action down just before you die, giving you a last minute chance to dodge or evade death with a well timed shot. What seem like simple mechanics on the surface feels like it was inspired by Eugene Jarvis and Housemarque titles though, with elaborate scoring opportunities that let you push your scores further and further when you replay previous levels.

The camera isn’t static like it was in games like Crusader or Smash TV, but swerves around to give you a good view of the action. With mixed results, sadly – sometimes a camera angle can obscure an enemy and thus get you killed, and at other times the camera movements aren’t as smooth as we would have liked, swerving just a little too fast and much for our comfort. With some tweaks, we’re sure this can be smoother experience, and on-screen indicators for off-screen/non-visible enemies would also go a long way.

We also wouldn’t recommend a mouse and keyboard combination with this game, which feels console-like despite currently being a PC exclusive thanks to the aim assist that kicks in when using a gamepad. Mouse controls help when precision shooting (for instance, when you’re trying to bounce an enemy into a saw running at full speed), but everything just felt like it flowed much better using a gamepad.

As with many arcade-inspired games, Radio Viscera is best enjoyed in short bursts, as the narrative delivery takes a back seat to the action and the gameplay and environments are a lot of fun but not terribly diverse. If you come into this thinking of an action adventure then you might be disappointed, but for some arcade fun this one is a blast. A few issues hold it back, but you can check the playable demo if you’re on the fence.