Three more brand new releases to check out today, and three very different ones too. We look at a lovely new indie platformer from Eastasiasoft with Blitz Breaker, new DLC story content for Watch Dogs Legion and the Early Access release of Black Skylands.

Eastasiasoft continues to surprise us with nice little indie releases this year, and Blitz Breaker is the latest one to join the ranks – a game that was released over five years ago (!) for PCs on Steam by developer Boncho Games.

On the surface, Blitz Breaker looks and feels like your typical challenging retro platformer – the kind of game we’ve seen dozens of times before and after the release of Super Meat Boy. Blitz Breaker has a twist though, and it has everything to do with how you control protagonist Blitz, a little robot looking to escape the factory he’s in.

Where you would normally expect to run and jump around as you evade traps and enemies, you’ll quickly find that Blitz can thrust himself in four directions instead, only to be stopped if he bumps into a surface that doesn’t kill him (yes, spikes and lasers are still a no-no). This thrusting/dashing mechanic is also used to battle bosses, but it’s the traversal that makes Blitz Breaker unique.

Because Blitz keeps going until you hit a wall, Blitz Breaker feels like a blend of the classic sliding puzzle games and challenging platformers, and it’s a hybrid that works well. With four areas that all have a dozen or so levels to tackle this isn’t the most content-heavy game out there, but it has a budget price tag to match – which should also make it extra appealing for those looking for a manageable trophy list to add to their collection.

Bloodline is Ubisoft’s first major story expansion for Watch Dogs Legion, which we enjoyed reviewing last year. It acts as a prequel of sorts as well, getting players familiar with events that took place in London prior to what happens in Legion. The city’s been rocked by a few bombings, and a familiar face returns to the scene: Aidan Pearce.

This is no doubt exciting for those who have been with the Watch Dogs franchise since the beginning, although Aidan’s aged 15 years and looks quite different – a new wardrobe and plenty of facial hair make the former protagonist feel almost like a new person. He has a nephew living in London though, and he sets you up with more of a familiar look before too long. It’s a bit like he’s putting on a Spiderman costume, only here it makes less sense to do so – except to create familiarity with the player, we suppose.

As you’d expect from a narrative starring Aidan Pierce, melee and gun-based combat are more prevalent than they were in Legion when we played the campaign last year. Stealth isn’t nearly as important here, and neither is controlling and alternating between a ton of characters – ironically what made Legion unique when it launched. You’re not with Aidan the whole time (Wrench from Watch Dogs 2 briefly returns as well), but it feels more like a return to the previous games than an expansion to Legion.

There are a few other surprises to uncover in the narrative as well and Bloodline provides a lot of fan service for those who have played through all three games, including one or two really well done set pieces that stray from the core Watch Dogs formula. With about five hours worth of gameplay this is a sizeable expansion as well, and you could stretch that to be even longer if you tackle the optional missions and go for all the trophies/collectibles as well. So far all of those have felt exactly like the optional missions/fetch quests from the core game though, so the biggest appeal here is definitely the story campaign. If you’re looking for something radically new then this might not be it, but if you have a fondness for all things Watch Dogs, you’ll enjoy Bloodline quite a lot.

From publisher tinyBuild comes Black Skylands, developed by Hungry Couch Games. Based out of Russia, the indie development team has just launched the game into Steam’s early access program.

In the game, which is described as a mix between a skypunk action adventure with top-down shooter elements, you play as Eva, whose homeland is in grave danger after an invasion by the Swarm, an alien species that is extremely hostile and violent in nature. There is also strife among your own kind though, as the evil Kain has used the Swarm invasion to seize power for himself as well. 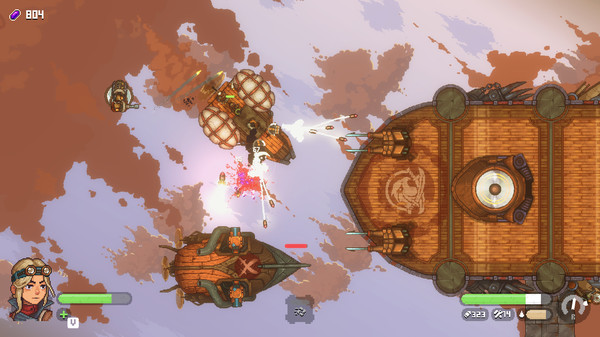 Black Skylands’ largely aerial-based adventure is somewhat reminiscent of Sunless Skies, but this game plays out very differently and is much more focused on gameplay mechanics like combat, customization and base building and less so on narrative development. The colorful 16-bit like visuals are also very different, as you traverse a huge open world and build and expand both your fleet and area of influence.

With so many different gameplay elements Black Skylands is certainly ambitious and a game we’ll keep an eye on, but it’s worth pointing out that it’s also a fresh new Early Access release and very much so in the true sense of the word. Little quality of life improvements (including better controls and the ability to skip previously seen cutscenes) would help, but there are also plenty of little bugs, glitches and balancing issues in the game during its EA launch window. Expect plenty of patch notes in the coming weeks, but if you enjoy following a game from its early incarnation all the way to its 1.0 release then Black Skylands is a good example of a close look at game development with a team that invites feedback from the player base.