Action Arcade Wrestling, from developer VICO Game Studio, is making the jump from PCs to consoles with its classic arcade wrestling formula. The PlayStation and Xbox versions are out now, and a Nintendo Switch release is coming in the near future. We’ve been having a lot of fun with the PlayStation version – here’s why.

For the past two decades or so, most of the wrestling games that came out were of the WWE 2K variety. For hardcore fans of the game and license, they got better and better at simulating the TV/show experience, but casual gamers who fondly remember the arcade wrestling games of the past weren’t catered to as well. The presentation was always great and made sure they were drawn in, but a steep learning curve kept it from being a “pick up and play” experience for most. 2K seemed to realize this last year when they filled the gap with WWE 2K Battlegrounds, but Action Arcade Wrestling takes it one step further by being accessible even for people who never played a wrestling game.

VICO’s Action Arcade Wrestling was originally released on Steam with a Chikara license attached to it, but is a game that ultimately works better without the license. This is in large part due to the excellent character creation suite that is available for free and lets you create and use any character you’d like – from a famous wrestler to a superhero or even an action figure come to life, pretty much anything goes. The only caveat is that the “Wrestle Lab” tool is only available on PC so that might be a bit of a hurdle for some, but anyone already set up with a PC or laptop running Steam can be up and running in minutes. From the tool, you can upload your character to a central server, from where your console can download it for use in the game. 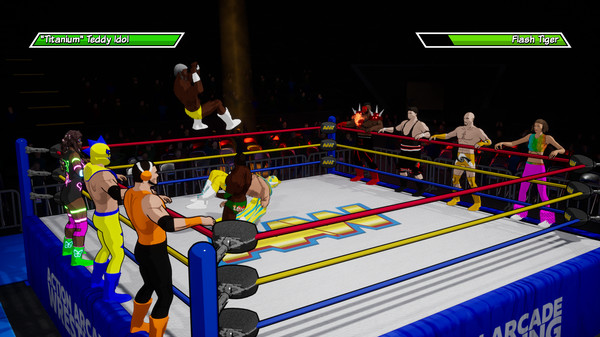 You can also create your own look and feel for the ring, which is a nice touch, so in theory you could recreate your own WWF Wrestlemania game here. The characters are cell-shaded so they’re not as detailed as those in a 2K WWE game (or even the aforementioned arcade game), but the plus side is that it makes character creation – which comes on top of premade characters already on the roster – super easy to do. With a ton of sliders and options, it’s fun to experiment and you can equip every character with a large range of moves as well.

The in-game action is incredible easy to control and uses a two-button system inspired by classic NES controls. Basically any combination of a direction and button press is a different move though a lot of the game obviously revolves around grappling as well. Unless, of course, you create a Superman-like character that shoots lasers out of its eyes instead. With hundreds of moves to choose from, there’s no shortage on diversity here. Mixing up your attacks is encouraged too, as repeating the same ones increases the likelihood of the other character doing a reversal.

If both characters grapple at the same time you get to engage in a button mashing sequence to see who gets to actually grapple, so it can be smart to go for strikes instead. They can be countered or blocked – and the latter is performed “old school” by just moving backwards. Equipping weapons is also easy, and they’re not restricted to folding chairs either – with some hilarious and creative stuff that we’ll leave for you to uncover. 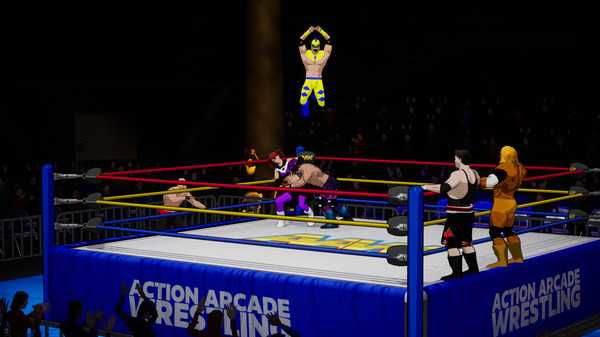 While accessible and fun, Action Arcade Wrestling can seem rough around the edges. Visually as well, because even though the overall look is intentionally “retro” there are also small glitches here and there – most noticeably when a (created) character’s hold of a weapon doesn’t look quite right. Sounds effects, while plentiful, can also feel like individual samples rather than part of a larger soundscape.

But what it may lack in polish, it more than makes up for in versatility. There are a lot of gameplay and customization options here, including the ability to play four player local co-op games with up to ten characters in the ring at once. You can also enable or disable “spots”, which are special in-game objectives that give you rewards and boosts when you perform certain actions. These can influence the flow of the match and are especially fun when you work together and use them for a tactical advantage.

The game’s fun factor and versatility shines mostly in local multiplayer, with limited lasting appeal for single player gamers. As a fighting game it’s not refined enough to satisfy purists who like to have unique tactics per character and opponent (the creation suite makes this impossible anyway), but it’s a ton of fun for some couch multiplayer sessions with people just looking to jump in – and whoever’s currently not playing can set up their own character to jump in during the next bout or tweak their existing character to come back for a rematch. In the right setting, this one’s a blast.